DREAMS are things that never happen!

That is why they are called DREAMS.
O

Never argue with an idiot (liberal).


"They will drag you down to their level, and beat you with experience"
O

"Democracy is two wolves and a lamb voting on what to have for lunch.

When the people find they can vote themselves money that will herald the end of the republic............"

Dogs are so wonderful and amazing.

This brilliant public service announcement video was created for the Argentine Institute of Liver Transplantation.

I Want My Dime Back, Fantastic Swing Dancing
This dancing group from Los Angeles called The LA Shag team, is having a great time demonstrating their dancing skills at Camp Hollywood to the California Feetwarmers’ rendition of ‘San’.

Footloose' - Dancing In The Movies

A very gentle Southern lady was driving across the Savannah River Bridge in Georgia one day. As she neared the top of the bridge, she noticed a young man fixing (ready) to jump.

She stopped her car, rolled down the window and said, "Please don't jump, think of your dear mother and father." He replied, "Mom and Dad are both dead; I'm going to jump."

She said, "Well, think of your wife and children." He replied, "I'm not married and I don't have any kids; I'm going to jump"

He replied, ''Who's Robert E. Lee?'' She replied, ''Well bless your heart, just go ahead and jump, you dumb ass Yankee."
O

There was a young fellow who was quite inventive and was always trying out new things. One day he thought he’d see just how fast a bicycle could go before it became uncontrollable. He asked his friend, who owned an old Mustang, if he could tie his bike to the bumper of his car to test his theory. His friend said, “Sure.”

So the young man tied his bike to the back of the car and said to his friend:

With that, off they went. Things were going pretty well, with the car driver slowly speeding up to well over 60 mph. The young fellow on the bike was handling the speed just fine. But, all of sudden, a black Corvette came up beside them and before you knew it the fellow driving the Mustang forgot all about the fellow on the bike and took to drag racing the Corvette.

A little further down the road sat Officer John in his police cruiser, radar gun at the ready. He heard the two cars before his radar flashed 105 mph.

He called into headquarters on his radio: “Hey, you guys aren’t going to believe this, but there’s a Corvette and a Mustang racing out here on Highway 3, and there’s a guy on a bike ringing his bell and waving his arms trying to pass them!”
O

A distraught young blonde woman suspected her boyfriend of cheating on her. In a fit of anger, she drove to a local pawn shop and bought a gun.

She showed up at his apartment unexpectedly, slammed open the door, and sure enough he was in his bedroom, naked in the arms of a beautiful redhead.

This angered her, and in the heat of the moment, she opened her purse and pulled out the handgun she bought earlier. She took aim, but grief overcame here and she pointed the gun at her own head.

The blonde started crying and through the tears screamed: “Shut up, cheater. You are next.”
O

A stumbling drunk is walking down the street when he stumbles upon a baptismal ceremony by a local stream. The priest notices the drunk and says, “My son, do u want to find Jesus?” The drunk says sure and gets in the water. The priest dunks his head in and asks, “Have you found Jesus?” The drunk says no and the priest dunks him again. The priest repeats this a couple more times, “Have you found Jesus?” he asks each time, but the drunk replies “No” every time. Finally, the drunk gets tired of the process and exclaims: “I don’t see Jesus anywhere.

Four friends reunited at a party after 30 years. After a few laughs and drinks, one of them had to go to the rest room. The ones who stayed behind began to talk about their kids and their successes.

The first guy says: I am very proud of my son, he is my pride and joy. He started working at a very successful company at the bottom of the barrel. He studied Economics and Business Administration and soon he was promoted and began to climb the corporate ladder becoming the General Manager and now he is the president of the company. He became so rich that he gave his best friend a top of the line Mercedes Benz for his birthday.

The second guy says: Damn, that’s terrific!! My son is also my pride and joy, I am very proud of him. He started working at a travelling agency for a very big airline. He went to flight school to become a pilot and also managed to become a partner in the company where he now owns the majority of the assets. He became so rich that he gave his best friend a brand new jet for his birthday.

The third guy says: Well, well, well congratulations!! My son is also my pride and joy and he is also very rich. He studied in the best universities and became an Engineer. He started his own construction company and became very successful and a multimillionaire. He also gave away something very nice and expensive to his best friend for his birthday. He built a 30,000 sq ft mansion specially for his friend.

The three friends congratulated each other mutually for the successes of theirs sons.

The fourth friend who earlier had gone to restroom returned and asked: What’s going on, what are all the congratulations for? One of the three said: We were talking about the pride we feel for the successes of our sons. And then he asked, What about your son?

The forth man replied: My son is gay and he makes a living dancing as a stripper at a nightclub. The three friends said: What a shame that must be, that is horrible, what a disappointment you must feel!

The fourth man replied: No, I am not ashamed. Not at all. He is my son and I love him just as well, he is my pride and joy. And he is very lucky too. Did you know that his birthday just passed and the other day he received a beautiful 30,000 sq ft mansion, a brand new jet and a top of the line Mercedes Benz from his three boyfriends.
O

Father’s Day was near when I brought my three-year-old son, Tyler, to the card store. Inside, I showed him the cards for dads and told him to pick one. When I looked back, Tyler was picking up one card after another, opening them up and quickly shoving them back into slots, every which way.

“Tyler, what are you doing?” I asked. “Haven’t you found a nice card for Daddy yet?”

The family had two twin boys whose only resemblance to each other were their looks. If one felt it was too hot, the other thought it was too cold. If one said the TV was too loud, the other claimed the volume was too low. Opposite in every way, one was an eternal optimist, the other a doom and gloom pessimist.

Just to see what would happen, on the twins’ birthday, the father loaded the pessimist’s room with every imaginable toy and game. The optimist’s room he loaded with horse manure.

That night, the father passed by the pessimist’s room and found him sitting amid his new gifts crying bitterly. “Why are you crying?” the father asked. “Because my friends will be jealous, I’ll have to read all these instructions before I can do anything with this stuff, I’ll constantly need batteries and my toys will eventually get broken,” answered the pessimist twin.

Passing the optimist twin’s room, the father found him dancing for joy in the pile of manure. “What are you so happy about?” he asked. To which his optimist twin replied, “With all this manure, there’s got to be a pony in here somewhere.”
O

If College Students Wrote the Bible

Instead of God creating the world in six days and resting on the seventh, he would have put it off until the night before to get it done.
Forbidden fruit would have been eaten because it wasn’t cafeteria food.
The reason why Cain killed Abel was because Abel was just a terrible roommate. Reason why Moses and followers walked in the desert for 40 years: they didn’t want to ask directions and look like freshmen.
The Ten Commandments would actually be only five – double-spaced and written in a large font.
The Last Supper would have been eaten the next morning – cold.
Paul’s letter to the Romans would become Paul’s email to abuse@romans.gov.
A new edition would be published every two years in order to limit reselling.
O

Scared of Trucks with Flags

An Honest "Ad" From Your Democratic Party Spokesperson


Over here at the Democratic Party, we can't wait to tell you all the great reasons to vote for Joe Biden and all of our other wonderful candidates... issues like men getting pregnant, the importance of riots and looting, and the intrinsic evil of all white people are sure to push you to the right side! WATCH more Relatable with Allie Beth Stuckey:

Old Reliable said:
It’s true, a dog is the only thing on earth that loves you more than he loves himself.

Dogs are so wonderful and amazing.

This brilliant public service announcement video was created for the Argentine Institute of Liver Transplantation.

I actually found myself crying. 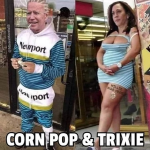 In the end, there are no "losers". Some winners just take longer to develop!

A tribute to our Fallen Soldiers who fought for our freedom