A group of hundreds of mothers have attended demonstrations and stood as a human barricade between Black Lives Matter protesters and federal officers in Portland after seeing videos circulating online of federal agents in camouflage snatching demonstrators off the streets.

they are libtard women . . . they are going to have to prove they are mothers
they can't simply self identify as a mother

raven said:
they are libtard women . . . they are going to have to prove they are mothers
they can't simply self identify as a mother
Click to expand...

I think you forgot the part about being race traitor twunts . . . .

another feed, last one got cut,

Mayor Ted Wheeler plans to stand on a downtown Portland street corner tonight to talk with protesters and try to break the stalemate between demonstrators and police that has stretched on for nearly eight weeks. There may be explicit language during this stream.

Watch Live at 4 p.m. ET: The Department of Homeland Security will speak to press about the escalating situation in Portland, Oregon.

ABC’s Jon Karl had asked “[W]here in the Constitution does the president derive the authority to send federal law enforcement officers to the streets of American cities against the will of the elected officials in those cities?”

McEnany answered that Code 1315 “gives DHS the ability to deputize officers in any department or agency, like ICE, Customs and Border Patrol and Secret Service as quote ‘officers and agents.’ They can be deputized for the duty, in connection to the protection of property owned or occupied by the federal government and persons on that property,” she continued. “When a federal courthouse is being lit on fire and commercial fireworks being shot at it, being shot at the officers I think that falls pretty well within the limits of 40 U.S. Code 1315.”

Karl then asked if President Trump sees any “limitations to that power” and if “that’s a matter of protecting federal property, how far does that power extend to the streets of Portland. What are the limitations of that, the authority to protect it?”

McEnany responded that, “nder the law we believe they can conduct investigations of crimes committed against federal property or federal officers. In the case where you have someone shooting off a commercial grade firework and then running across the street, we don’t believe that extends past the jurisdiction.”

After the Portland has been under fire by riots for almost two months with the mayor’s and the state’s governor’s seeming approval, federal law enforcement had no other choice but to go in and stop the chaos themselves. As reported by the Daily Caller, border patrol agents detained people in Portland last week to “investigate links to assaults on law enforcement officials and vandalism on federal property.”

In a statement, Customs and Border Patrol said that, “[W]hile the U.S. Customs and Border Protection (CBP) respects every American’s right to protest peacefully, violence and civil unrest will not be tolerated. Violent anarchists have organized events in Portland over the last several weeks with willful intent to damage and destroy federal property, as well as injure federal officers and agents. These criminal actions will not be tolerated.”

No country can possibly survive if insurrection is tolerated. Hence, these Leftist mobs need to be stopped. Thank God for the Trump administration and its response.

live feed is saying Seatle washington is having riots, looting and several buildings on fire

Shooter said:
live feed is saying Seatle washington is having riots, looting and several buildings on fire
Click to expand...

Thanks to the poor reporting of the Lame Stream Media, I had been under the delusion that this was a relatively quiet summer... That's what happens when you'd rather quietly read, while in lockdown since the last week of January, than watch the goddamnedidiot box, 24/7/365. More fool me...

Guess I'll clean Thunder an' Lightnin' tomorrow night. Have to do it then, as I don't want to scare the caregivers who sometimes wander around... They're no longer snowflakes, having bought firearms, and begun prepping in earnest... It's nice when young folks listen...

All Universe's Best to You All...

I watched the riots from 10 pm till 4 am central time, had at times 9 screens up. if you didnt see it, you have no idea how angry and violent these people are, that dumb ass mayor was extremely lucky to get out of the area with his life,

but THE FENCE HELD last nite,

I thought it was quite funny

T also watched last night's split screen of the protest. There is a guy in a red bathrobe, clutching something, who frequents the protests. I wonder if he was awakened by the noise and decided to join in - lol
H 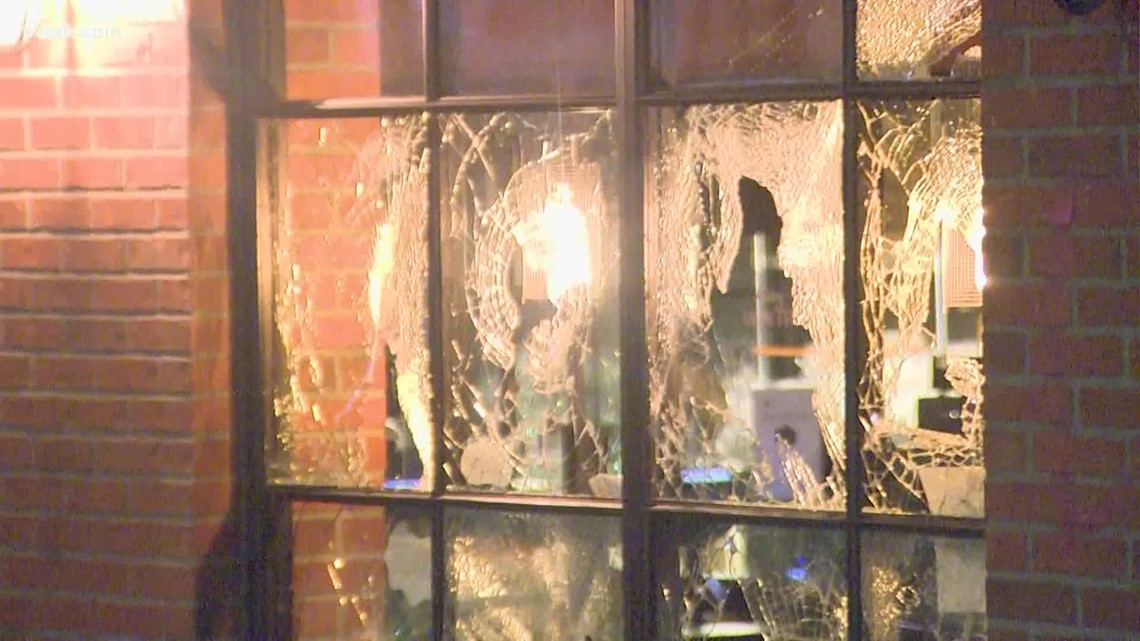 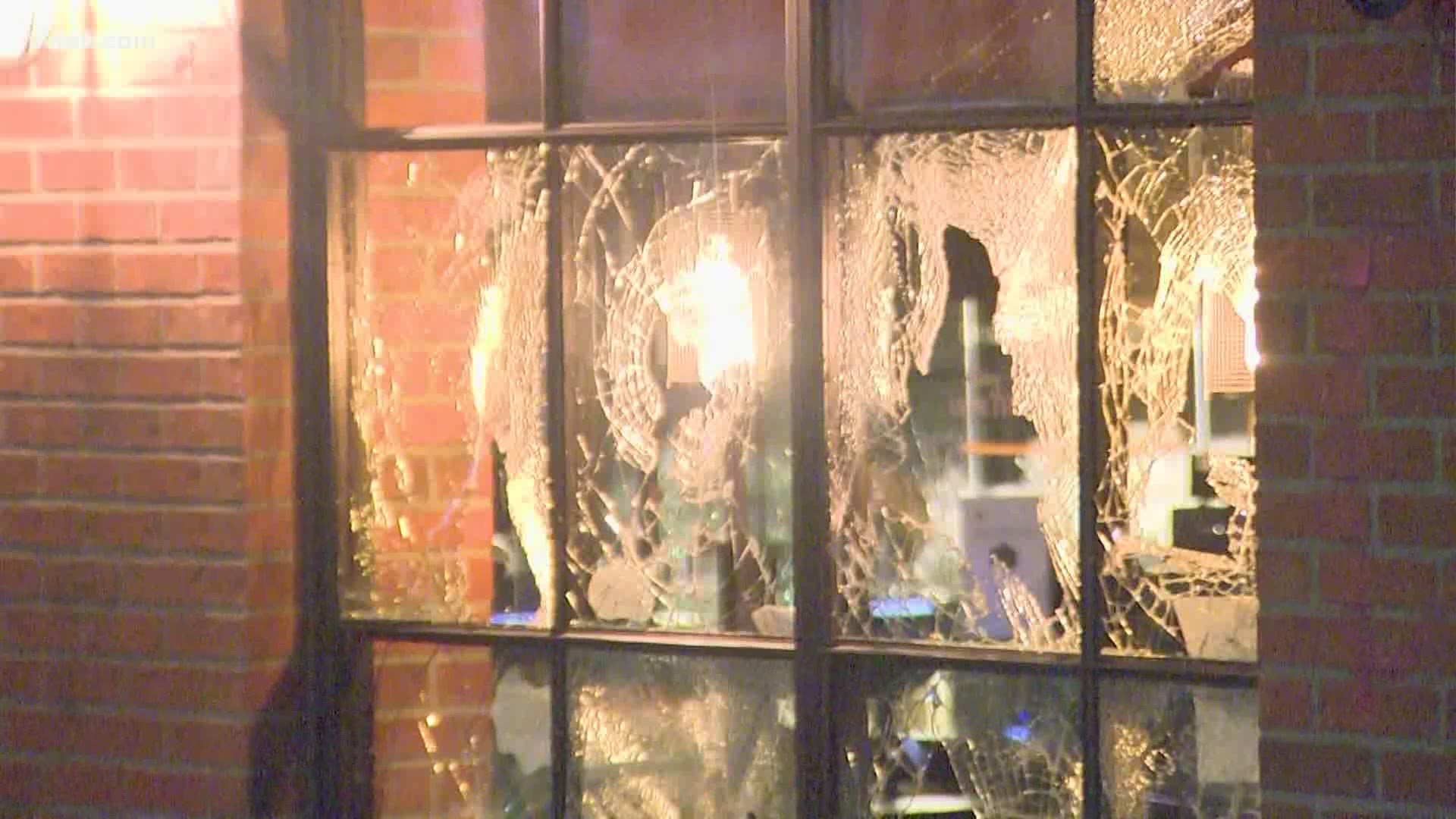 According to police, the group gathered in Cal Anderson Park around 9 p.m. and started roaming the neighborhood.

Police said people in the group broke the windows of a business on the 1400 block of East Olive Way and started a fire inside. Seattle Fire was able to put the fire out.

The group broke windows of businesses as they walked to the 1500 block of 11th Avenue. The SPD said people from the group broke into Rove Vintage on that block, taking merchandise and then setting it on fire in the middle of the street.

Other stores that were struck included Whole Foods, Uncle Ike's on Capitol Hill and the Starbucks on Olive Way.

#OVERNIGHT Several businesses on #CapitolHill were broken into and looted. Police say 150 people roamed the neighborhood/busted into shops. @Starbucks, @WholeFoods, @UncleIkes206 and Rove Vintage are just a few that were hit. #KING5 pic.twitter.com/v81lTAhovW
— Kalie Greenberg (@KalieG_KING5) July 23, 2020
Click to expand...

Police said people in the group used baseball bats and pipes to break the windows of a store at Broadway and Madison. People then started looting and setting off fireworks in the store.

Property at two banks was also damaged near Summit and Madison, police said. The group then returned to Cal Anderson Park and dispersed.

The SPD said no arrests were made, and no officers were injured.

The group has broken into business at Broadway and Madison and smashed windows along the storefront.
— Seattle Police Dept. (@SeattlePD) July 23, 2020
Click to expand...

Local resident Maryann Palmer said she was troubled by the destruction.

“I think it is very, very sad,” Palmer said. "I definitely do not feel safe, and I feel like we have violent people coming in and destroying my beautiful neighborhood."

Seattle Police Officers Guild President Mike Solan said the continuing demonstrations, including one at the West Precinct last Sunday, have the officers concerned.

"This weekend might be more of the same, so it is a very unfortunate predicament that we are in," Solan said.

Last Sunday, 12 officers were hurt during a day of violent clashes with protesters.

"If that continues I am not quite sure how much more we can take because we are not punching bags. We didn't sign up for this job to get hurt and maimed on a continued basis,” Solan said.

The Trump administration is sending a tactical border patrol team to Seattle, making good on President Trump's pledge to use the full force of the federal government to protect federal property,

The Trump administration is sending a tactical border patrol team to Seattle, making good on President Trump's pledge to use the full force of the federal government to protect federal property, The New York Times reports.

The team being sent to Seattle is similar to the teams that have already been deployed to Portland to fortify federal property that has been damaged by protesters who have dominated the city's downtown area since the police killing of George Floyd in Minneapolis at the end of May.

Formally the federal officers are known as a Special Response Team and operate under U.S. Customs and Border Protection (CBP), according to the Times.

“The CBP team will be on standby in the area, should they be required,” the Federal Protective Service said regarding the federal squadron.

A CBP spokesperson said that the team would only be used if the protests expected this weekend in Seattle escalate to a boiling point.

Mayor Jenny Durkan (D) told the Times in an interview that she had spoken with Department of Homeland Security (DHS) acting Secretary Chad Wolf earlier Thursday. Wolf told her that administration didn't have plans to deploy a large force of agents to the city and wouldn't do so without communicating with her first. Durkan said that she hadn't been made aware of the incoming federal team, but noted that DHS could be making a distinction between active agents and those on standby. The mayor made it clear to Wolf that Seattle did not need the assistance of federal officers.

“Any deployment here would, in my view, undermine public safety,” Durkan told the paper.
DHS spokesman Alexei Woltornist told the Times that the federal presence in Seattle would be smaller than that in Portland.

The federal officers in Portland, who have been there since late June, have caused outrage nationwide. In particular, the conduct of the agents has raised serious legal and constitutional questions.

Still, the president has continued to throw his full support behind the agents and Wolf.
On Monday he said that he would possibly be sending more federal officers to other "Democratic" cities, saying that the agents in Portland were doing "a fantastic job."
“I’m going to do something — that, I can tell you,” Trump said. “Because we’re not going to let New York and Chicago and Philadelphia and Detroit and Baltimore and all of these — Oakland is a mess.”

The Hill has reached out to DHS for comment.

View: https://www.youtube.com/watch?v=wwKg9EAbtWg
LIVE
Portland, Seattle, Beverly Hills
It's the day before the weekend! You know what that means ( *︾▽︾) | YouTube show us love!!
D

Interesting twist tonight...the feds did a major clearing action with tons of gas and pepper balls. Then had an officer pretty darn close to the fence taking pictures of the hard core elements that didn’t clear out, even into the street. Maybe some after action arrests will be in play.

This link works for a live feed, at this time: