I'm trying to figure out how to poofread.

AlfaMan said:
Well, just finished up the ham and turkey. On thanksgiving I do the cooking, it's kind of a tradition with us.

The ham was glazed with orange blossom honey-with just enough heat and time to give it a bit of a crunch. A little salt, a touch of pepper and the honey-that's it. Wife is already nibbling at it.
She's a fan of turkey; I'm ok with it but it's not a favorite of mine. But it's not thanksgiving unless she has turkey. So, I fixed a breast. 3 pound Butterball. Slathered it in olive oil with a touch of cilantro (yeah I experimented a bit). Then I hit it with butter and salt and pepper. Put it in the oven for an hour and a half.
The house REEKS of ham and turkey smells. I made a big plate of biscuits, the missus did the homemade cranberry sauce. I made some turkey gravy this time. Made some spinach too, I like a nice veggie with the meal. Oh, and I felt like some baked potatoes. They were good!

We ate early-my wife nearly polished off the turkey by herself ! I have to admit, it was moist through and through, the cilantro left an interesting flavor; not overpowering but a great compliment to the meat. She loved the biscuits and gravy; I made a dozen and there's 4 left (mine went down with some muskiedime jelly. Don't have a clue where my sugar meter is today

The ham was perfect, if I say so myself. The taste of the honey with the flavor of the ham-delicious. She loved it; TBear hung out at her plate this time. It's his first Thanksgiving, and he definitely liked the turkey over the ham. He and Roscoe also had a nice plate they shared.

For the virtual feast, I'll go ahead and make some more. I've got some real deal country ham; would ya'll like that in addition to the orange honey ham?
Click to expand...

lonestar09 said:
I'm trying to figure out how to poofread.
Click to expand...

Looks like the virtual Thanksgiving turned out all right. Glad to hear it!
D

greysage said:
That is some nasty fowl.
Click to expand...

Very nice. Looks like it made a good meal.

Duck is my most favorite thing. Looks like a good meal

Looks pretty tasty! I have to know though-did the pups stare at you through the entire meal until you gave each of them some of it?
Or, did they try and pull a "TBear"-when he wants something he'll jump up on my chest (all 12 1/2 pounds of him, at high speed) put his backside in my face and try and intercept the food I'm trying to put into my mouth?

It's a Baklava Balaclava! 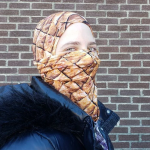