Rashida Tlaib Shouts Her Clapback to ‘Obsessed’ Pro-Lifers: ‘Maybe You Shouldn’t Even Wanna Have Sex With Me!’

"..maybe you shouldn’t even want to have sex with me!”

She got one thing right. Beauty is only skin deep.......but ugly is to the bone

Rep.-elect Rashida Tlaib, D-Mich., pauses to speak to media as she walks from member-elect briefings and orientation on Capitol Hill in Washington, Thursday, Nov. 15, 2018. (AP Photo/Carolyn Kaster)
While oral arguments were made Wednesday in the first SCOTUS abortion case since Brett Kavanaugh’s confirmation, activists unsurprisingly gathered.
In front of the Supreme Court, Democratic Michigan Rep. Rashida Tlaib spoke to a rallied pro-choice crowd.
In her address, she recalled some abortion-positive comebacks during her time in the Michigan legislature.
But first, a revelation:

“This past year, I realized — my, my, my are they obsessed with our bodies, how we talk, how we look, what we stand for — I mean this type of policing of our bodies is so interconnected to all the social justice movements all around the country.”
Click to expand...

Now here’s a story for ya:

“You know I, in the legislature — in the Michigan legislature for six years — used to say to people, ‘Yo yo, you know what? You’re so freakin’ obsessed with what I decide to do with my body, maybe you shouldn’t even wanna have sex with me!’ (pointing to the crowd) Or with you. Or with any women.”
Click to expand... 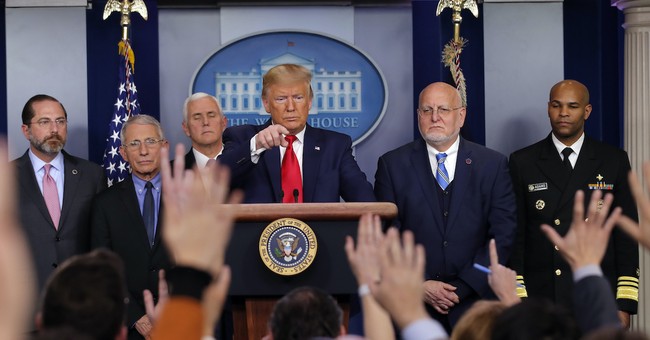 Rashida’s commentary, of course, illustrates a major problem with political discourse in America. Maybe it’s good for cheers from those in her sight, but her words accomplish nothing.
In order to make way in any conflict, you must address the core disagreement.
No one on the pro-life side of the argument gives a flip about what someone does with their body. The contention, as you know — and as surely does she — is that it’s a baby’s body.
And until there’s the willingness to have thoughtful debate over that issue, there will be only posturing in lieu of progress.
As for the court case at hand, it questions a Louisiana law which mandates that abortion clinics obtain hospital admission privileges in case the procedure is botched.
Outside, Rashida’s fellow speaker — Renee Bracey Sherman — gave kudos to those present who’d undergone abortions themselves:

“A special shout-out to — where my people who’ve had abortions? Where y’all at? Nothing about this work is going to be without us! Woo!”
Click to expand...

For Renee, having an abortion was “one of the best decisions” she ever made.
As per the author and activist’s website, she’s the “Beyonce of Abortion Storytelling.”
In January, she shared an article asserting that “having the abortion talk with children is easier than you think.”
She’s already done so with her 5-year-old:
Back to Rashida, she had a message about commercialization and revenue for Americans who are pro-life. Perhaps some of you can explain it to me:

“[E]nough is enough. We won’t stand by for you to commercialize, for you to profit, for you to do all the things you do to — what? To make us ‘less than’ in this country. Because that’s what it does.”
Click to expand...

what a vile human being.

Cacheman said:
She got one thing right. Beauty is only skin deep.......but ugly is to the bone

I have known people that could have been far more nice-looking than they were, but for the ugliness emanating from the inside.

Tlaib is one such person. Her ugliness goes down to her very soul.
D

I was sorely tempted to reply with a rather coarse statement from my teenage years, but decided not to out of consideration for the board.

I have absolutely zero problem following her directive in that regard.

Dennis Olson said:
maybe you shouldn’t even wanna have sex with me!’
Click to expand...

Kind of a self-answering statement isn't it?

Dennis Olson said:
maybe you shouldn’t even wanna have sex with me!’
Click to expand...

The fact that she thinks anyone would want to have sex with her shows how delusional she truly is!
T

Yep, that's a TWO bagger if i ever saw one. Maybe past midnight but i doubt it.
Mike

I wouldn't even want to hit her with my truck.

packyderms_wife said:
The fact that she thinks anyone would want to have sex with her shows how delusional she truly is!
Click to expand...

Dennis Olson said:
not even on FetLife....
Click to expand...

She'd get her ugly ass laughed off of the site, and there are some real dogs there!

greysage said:
I wouldn't even want to hit her with my truck.
Click to expand...

Why do you dislike your truck so much that you'd even go there with that thought?

I always thought she looked like a dude...seriously, not trying to be mean or anything.

Don’t care what you do with your ugly ass....do care when you kill babies-no longer just “your body”
N

NOT enough Tyvek in the whole world.

Not enough Bourbon in Kentucky to make the Booze Glasses do ENOUGH magic.

No worries here, I wouldn’t even f*** her with Michelle Obama’s dick

Apparently she is either separated or divorced now. Sounds like an arranged marriage within their family. She's not good looking and I suppose that's why she had to go the arranged route.

Looking stuff up on her I found this. RELATIVE & HUSBAND
FAIZ TLAIBRASHIDA TLAIB'S INCESTUOUS MARRIAGE
RASHIDA TLAIB’s mother FATMEH TLAIB was from Beit Ur al-Fauqa, where the rest of the Tlaib Clan resides. RASHIDA TLAIB’S father, HARBI ELABED, was from Beit Hanina. HARBI ELABED moved to the United States in the late 1960s then returned to Judea Samaria in the mid-1970s and married FATMEH TLAIB. The couple returned to America and had a family of fourteen. FAYEZ TLAIB and RASHIDA TLAIB married in 1998, at the time she was 22-years-old. FAYEZ TLAIB, was also from Beit Ur al-Fauqa. FAYEZ TLAIB was related to FATMEH TLAIB, RASHIDA TLAIB’s mother. Because Rashida Tlaib married a relative of her mother’s, her married name is the same as her mother’s maiden name. This marriage could be a violation of US or State law depending on how close arelative to her mother she married. A relative is a person connected by blood or marriage. Was in blood or marriage? Don't we have a right to know if a Congresswoman was involved in an incestuous illegal marriage?

During their marriage they had two children, sons Adam and Yousif. Their romance faizeled out and couple went their separate ways around 2015. The former couple made headlines when reports surfaced saying they consistently underpaid their taxes since 2008. Rashida then blamed Fayez who was a bum. RASHIDA TLAIB’s grandmother is Um Issa Tlaib. Another maternal uncle is name ISSA.

Consanguineous marriages have been practiced since the early existence of modern humans. Until now consanguinity is widely practiced in several global communities with variable rates depending on religion, culture, and geography. Arab populations have a long tradition of consanguinity due to socio-cultural factors. Many Arab countries display some of the highest rates of consanguineous marriages in the world, and specifically first cousin marriages which may reach 25-30% of all marriages. In some countries like Qatar, Yemen, and UAE, consanguinity rates are increasing in the current generation. Research among Arabs and worldwide has indicated that consanguinity could have an effect on some reproductive health parameters such as postnatal mortality and rates of congenital malformations. The association of consanguinity with other reproductive health parameters, such as fertility and fetal wastage, is controversial. The main impact of consanguinity, however, is an increase in the rate of homozygotes for autosomal recessive genetic disorders. Worldwide, known dominant disorders are more numerous than known recessive disorders. However, data on genetic disorders in Arab populations as extracted from the Catalogue of Transmission Genetics in Arabs (CTGA) database indicate a relative abundance of recessive disorders in the region that is clearly associated with the practice of consanguinity. HIH REF
Click to expand...

Abstract This study presents the assessment of inbreeding depression on the intelligence quotient among north Indian Muslim Children of school age. The Wechsler Intelligence Scale for Children (WISC-R)-74 was given to the children in both groups (50 each non-inbred and inbred of the first-cousin status), aged 6 to 11 years and from the same socio-economic status. The change of the mean follows genetic theory; however, the nature of the change in variance seems to be somewhat different. PIP: The level of inbreeding depression on the intelligence quotient (IQ) of North Indian Muslim schoolchildren was assessed in a survey conducted in Aligarh. The 50 inbred children were products of marriages between first cousins; their mean age was 7.7 years (range, 6-11 years). A significant (p 0.001) negative association was found between inbreeding and score on the Weschler Intelligence Scale for Children (WISC-C). In addition, the weighted mean IQ of inbred children )88.4 + or - 1.37) differed significant (p 0.001) from that recorded among 50 noninbred controls of similar age and socioeconomic status (99.6 + or - 2.0). The group means for both verbal and performance IQ subscales differed significantly and in the expected direction between subjects and controls, but the lower variance recorded in the inbred group did not conform to genetic theory. However, data do not always demonstrate a clear trend of linear increase in phenotypic variance with inbreeding in human populations. Additional surveys in other populations and for various inbreeding levels are recommended. NHI REF
Click to expand...

Just an aside, but I don't know where they got the word "clapback" from. It sounds like a new snowflake phrase...at least I've never heard it before the last year or two, and I find it slightly annoying...

The Hammer said:
Husband looks like a real winner too...

Just an aside, but I don't know where they got the word "clapback" from. It sounds like a new snowflake phrase...at least I've never heard it before the last year or two, and I find it slightly annoying...
Click to expand...

In normal human speak it would be comeback. e.g., I normally have a snappy and witty comeback when people show disrespect for my cooking prowess when fixing delicacies with Spam that's "slightly" past its prime.

There ARE laws against Bestiality

She is one of the best arguments for mooslime women wearing burkas that I have seen!

I believe I have a healthy ego and am happy with myself, but when I listen to these people I am utterly amazed at the thought process behind their words.

Cacheman said:
"..maybe you shouldn’t even want to have sex with me!”
Click to expand...

I wouldn't do her with Adolf Hitler's dick! 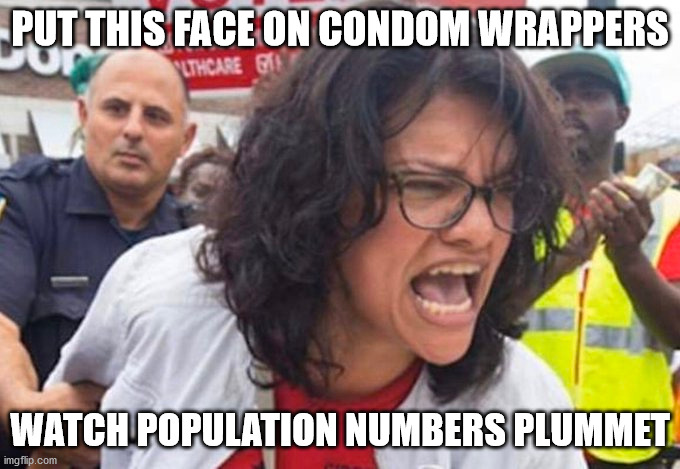 Censorship from IT is a good idea.

greysage said:
I wouldn't even want to hit her with my truck.

packyderms_wife said:
Why do you dislike your truck so much that you'd even go there with that thought?
Click to expand...

It's a long time til payday, and his truck needs a quick grease job?

(Is a variant on an old Mexican joke)

dawnbringr said:
There ARE laws against Bestiality
Click to expand...

And for Damn Good reason too.
beast that she is.

"..maybe you shouldn’t even want to have sex with me!”
Click to expand...