WTF?!? Mans assaults another man with Tire iron over mask.

GREEN BAY, Wis. (WBAY) - Disagreements over people wearing masks escalated to the point of a man being beaten outside a grocery store in Green Bay.
It happened August 3rd at about 8:30 p.m. when a man, who was wearing a mask, walked back to his van in the parking lot of Festival Foods on University Avenue.
Prosecutors say another man, now identified as 20-year old Vadim Sinitsky, saw him and said, “Isn’t it dumb we have to wear masks?”
According to court records, the victim then walked back to Sinitsky’s car and said, “What did you say cupcake?”
He then added, “I have to wear a mask cupcake because my wife has cancer...” and walked away.
A witness told police he saw Sinitsky grab a metal bar, described in court documents as both a tire iron and expandable baton, force the victim’s driver’s door open and begin beating him on the arm and leg while yelling.
Prosecutors say the victim was eventually able to shut his door, and Sinitsky and another man took off.
Police quickly spotted their car about a mile away and arrested Sinitsky.

Officers said he was extremely emotional and began crying.
Court records show Sinitsky later told them the victim threatened his life and ‘he took care of it because he was a man.’
He added something about self-defense before beginning to ‘rant about police and society,’ according to court documents.
Officers transported Sinitsky to the jail, but jail staff asked for medical clearance, wanting him tested for COVID because of his high temperature.
At the hospital, prosecutors say Sinitsky was uncooperative, charged at an officer, became resistive and made several comments that he was going to beat an officer.
Prosecutors say Sinitsky asked police to remove his handcuffs, go in a room and box with him.
He was eventually cleared and taken back to the jail.
Prosecutors charged Sinitsky with battery, disorderly conduct and resisting an officer, all misdemeanors.
He’s been released on a $2,500 signature bond.
Copyright 2020 WBAY. All rights reserved.

Another perfect example of the lunacy over masks. It seems to have been final tumbler in the lock that slipped the manacles from rational thought. It’s seems to be less about pro or con masks, but more about the “purge”. Be warned, be aware and be prepared. You won’t get a second chance, when it comes to your doorstep.

Snark: a higher form of communication

as I've said before - WHEN will it get to the "let GOD sort 'em out" stage?

Raggedyman said:
as I've said before - WHEN will it get to the "let GOD sort 'em out" stage?
Click to expand...

I think we are on the precipice of it. The tire iron comes pretty close to letting God sort them out.

we can thank the media for this insanity - once the globalist demigods heads are on pikes, we need to begin hanging EVERY LAST MEMBER of the ministry of propaganda from conveniently located high places in full public view . . . perhaps the well known "talking heads" would be best handled by good old fashioned necklacing in the South African fashion - done as a pay per view event - all proceeds going to fund the TWO DOOR SOLUTION
X

I’ve always gone without a mask and finally after all these months, last week, I was questioned by two different people. Between that, 99.5% around me always wearing masks now, and the stories of attacks online, I know every time I go to the store, this could be the time I’m attacked. It’s stressful but I’ll continue to do so because I won’t be socially shamed into doing something I don’t believe is at all helpful.

There’s a private Facebook group called Unmask Texas. Some posts are complaining, some encouraging others, some helpful articles.

I love their logo! 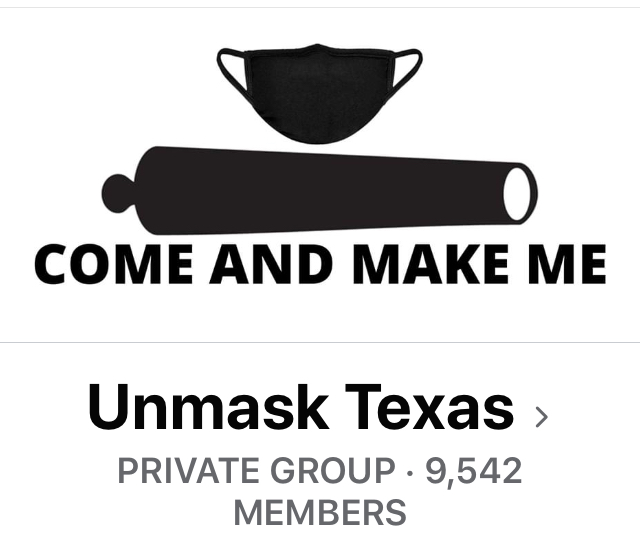 xtreme_right said:
There’s a private Facebook group called Unmask Texas. Some posts are complaining, some encouraging others, some helpful articles.

I love their logo!

Raggedyman said:
as I've said before - WHEN will it get to the "let GOD sort 'em out" stage?
Click to expand...

When Adam met Eve.
You must log in or register to reply here.
Share:
WhatsApp Email Link
Top