Kamala Harris Endorses Biden Months After Attacking Him As Racist


Harris, on Sunday, talked up Biden as the best candidate to beat President Trump in November.

“There is no one better prepared than Joe to steer our nation through these turbulent times, and restore truth, honor, and decency to the Oval Office," Harris said in a statement. "He is kind and endlessly caring, and he truly listens to the American people. You can see in his eyes how he takes to heart the experiences of mothers and fathers working to make ends meet and worrying about whether their children can be safe in their classroom, or young people who fight tirelessly to tackle climate change as they ask for a fair shot at the future in front of them."

Harris's endorsement of Biden comes as he's on the precipice of being on a clear path to win enough delegates to secure the Democratic nomination at the party's national convention this summer, over Vermont Sen. Bernie Sanders. It's also a notable change in tone from the first Democratic debate of the 2020 cycle in Miami in June.

Harris, at the time, took Biden to task for opposing busing(designed to end racial segregation in schools) and declared that she had been a victim at age 6, saying, "I was that little girl."


The California senator later in that debate pressed Biden on his remarks at a New York fundraiser weeks earlier, when he touted his collaborative working relationship with known segregationists former Sens. James O. Eastland of Mississippi and Herman Talmadge of Georgia in the Senate during the 1970s.

“I do not believe you are a racist,” she said. “But I also believe, and it’s personal, and it was hurtful to hear you talk about the reputations of two United States senators who built their reputations and career on the segregation of race in this country.”

The exchange temporarily knocked Biden on his heels in what was then a Democratic field with more than 20 candidates. But it proved the high-water mark of Harris's bid for the 2020 Democratic presidential nomination. After an immediate surge in poll numbers and donations, her campaign flagged, and she dropped out of the top tier of candidates.

In November, she closed downher entire New Hampshire campaign operations in a bid to shift all her resources to the Iowa caucuses. Weeks earlier, Harris fired dozens of staffers from her campaign headquarters in Baltimore, Maryland. By the end of the third quarter, Harris's campaign had the highest cash burn rate of any other candidate running for office, spending 122.9% of all dollars donated.

Harris left the race on Dec. 3, in time to remove her name from the March 3 Super Tuesday ballot in California. Sanders appears to have won California narrowly over Biden, but the delegate split will be nearly even.

Harris's endorsement comes two days before a crucial round of Democratic primaries that could prove decisive in deciding the Democratic nominee against Trump. Contests in Idaho, Michigan, Mississippi, Missouri, North Dakota, and Washington on Tuesday account for 352 delegates.

Tuesday’s contest is the first test of a two-man race between Sanders and Biden, and it is not clear how effective Sanders’s outsider pitch will be against a well-liked Democratic figure who mounted a stunning comeback in the race after being written off because of poor finishes in Iowa and New Hampshire.

Harris's endorsement only adds to his establishment credentials, considered an asset when electability against Trump is a key criterion for many Democratic voters. Her back also offers a preview of a potential Democratic ticket this fall.

Harris, daughter of a Jamaican father and Tamil Indian mother, reflects the diversity in the original Democratic field, including six women. But with the nomination fight now effectively between Biden, 77, and Sanders, 78, many are looking for a more diverse pairing on the ticket. Biden to date has given no indication who his running mate might be, focused instead on clinching the Democratic nomination. 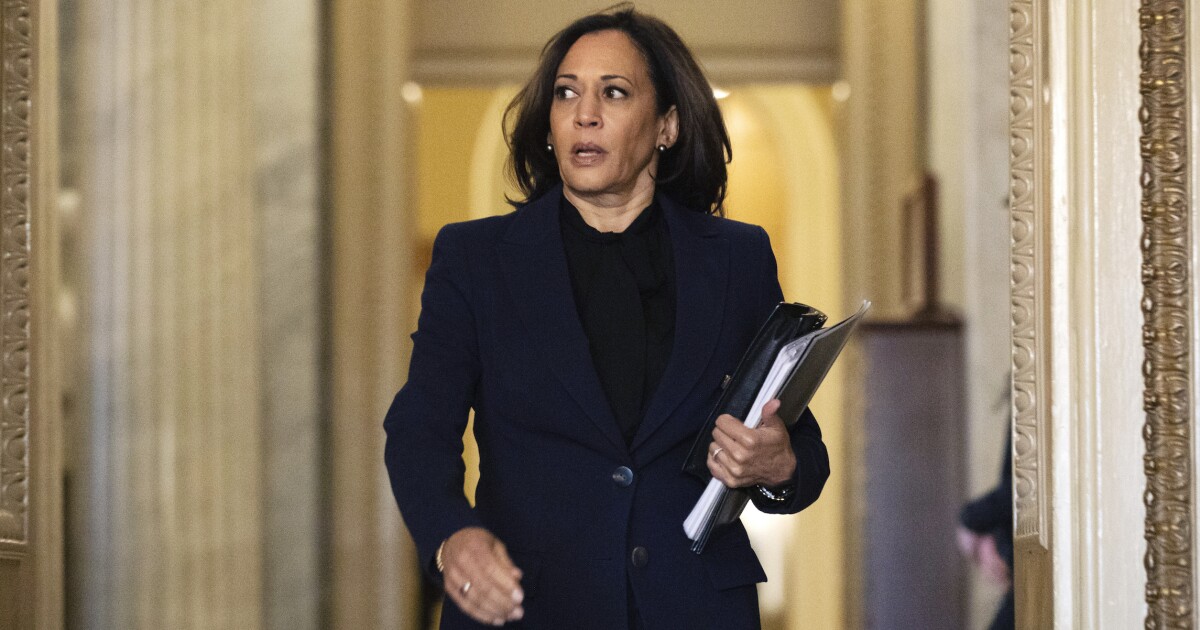 All of which brings to mind the toilet paper discussion. Humans don't need to lick their own butts, because we have other humans who will do the licking.

Voice on the Prairie

She's trying her best to make herself relevant to this campaign. It's a lost cause: her 15 minutes of fame are over.

Pay to play?
Go along and get rewarded?

I don't view a Harris endorsement as anything that special. I'm just amused at the great illustration of the insincerity that is politics...

Last Year: "What this man did and said is ghastly, despicable! How dare he! This is the kind of horrible thing I plan to put an end to if you elect me! Icky-poo!"

This Year: "This man is so kind and warm, a really wonderful man. He may in fact save the world. I think his kids and my kids should get together and play at the church picnic..."

The hypocrisy. None of these tools on the left have any integrity whatsoever. Our a-hole governor, Gina Raimondo was all over Bloomberg until he crashed and burned. Now it’s Biden all the way.
J

Kamel Toe must have dusted off her knee pads for this. She is wanting either the VP slot or a cabinet position, and with the knee pads is the only way she can get ahead. No pun intended LOL
M

trying to keep her name in the news