Only worry about what you can control!

Checking in South of Wilmington, NC here... They are evacuating all of the vacationers from the Brunswick County Islands starting tomorrow morning. Guess I'll move the chickens inside Sunday afternoon. We are 4 minutes inland from the coast... It'll do something is all I'm sure of at this point.

They are still calling it Is Sah E Ah. It's pronounced. I zay ahh. Like the book in the bible

Walrus Whisperer said:
They are still calling it Is Sah E Ah. It's pronounced. I zay ahh. Like the book in the bible
Click to expand...

Not if you are a latin type.

The Mountain said:
Looks right now like this one will affect NYC and New England. Bet no one will do anything about it until the last minute though.
Click to expand...

SNE is my AO. We are doing our hurricane preps this weekend. That guaranties it will pass us by.

We are about 1 mi from the salt marsh and another 2 mi to the ocean in SC . Looks like it's aiming for us. We did some outside work yesterday and will get the preps set up today. This will be our 4th storm down here. I will do my normal and make coffee for the neighbors and check to see that they are OK.

straightstreet said:
Isaias name meaning:
God is my Salvation and is Spanish in origin The name Isaias means God Is My Salvation and is of Latin origin. Isaias is a name that's been used primarily by parents who are considering baby names for boys. Find out more about the name Isaias at BabyNames.com.

Still, I rather have an English name that is easy to pronounce. PC complicates the simplest things.
B

I can deal with the wind and rain, but man, I pray we don't lose power. That coupled with the Fl humidity makes it miserable.

billet said:
I can deal with the wind and rain, but man, I pray we don't lose power. That coupled with the Fl humidity makes it miserable.
Click to expand...

2004 was HORRIBLE, running joke...'What are y'all doing this weekend?'

"Oh, just getting ready for the next hurricane"....
What a nightmare!

Here on The Space Coast, we're not even putting up shutters.

We did get gas for the genny just in case...
R

billet said:
I can deal with the wind and rain, but man, I pray we don't lose power. That coupled with the Fl humidity makes it miserable.
Click to expand...

I'm not anywhere near that hurricane but yesterday our power blinked a couple of times and it was like Dear Lord, please. It is so hot and humid here if the air conditioner went out I'd be sitting in the backyard under a sprinkler.
B

workerbee said:
2004 was HORRIBLE, running joke...'What are y'all doing this weekend?'

"Oh, just getting ready for the next hurricane"....
What a nightmare!

Here on The Space Coast, we're not even putting up shutters.

We did get gas for the genny just in case...
Click to expand...

Vero Beach here. I'm not putting them up either. Moved inside all of the "launchable" items.

Walrus Whisperer said:
It's pronounced. I zay ahh. Like the book in the bible
Click to expand...

I'm as ready as I can be.
There's plenty of food, cash on hand, and fuel for the generator.

If no trees fall on my house I'll survive.

I expect to lose power for a few days if it's still strong when it hits here, depending on the precise track.

I find it interesting that they are forecasting that it will weaken to a tropical storm while it is over the Gulf Stream. I was planning on running the generator today anyway, so I did so. I needed to fill up gas cans treated with sta-bil anyway. Dang, you folks along the coast sure don't need another storm. But at least it is only a Cat 1 at this point.

Lone_Hawk said:
I find it interesting that they are forecasting that it will weaken to a tropical storm while it is over the Gulf Stream.
Click to expand...

Dry air and wind shear will hopefully weaken it or at least keep it from getting stronger. 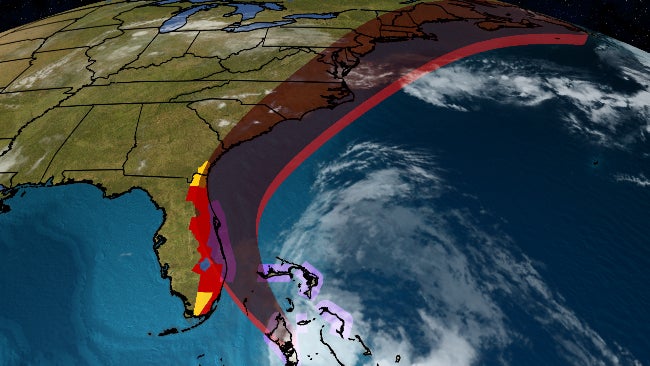 Here is the latest complete forecast briefing on Isaias.

It won't stay hurricane for long.

Non event here. Good weather watching tho! If I lived alone I probaby would not have put shutters up. Nothing like a good "fire drill"!.
Dh made a phone charger out of a marine battery, so that was kinda cool.


Isaias is near hurricane strength early Monday as it approaches the Carolinas, just a day after bands of heavy rain from the tropical storm lashed Florida’s east coast

VERO BEACH, Fla. (AP) — Isaias was forecast to become a hurricane Monday as it neared landfall in the Carolinas after bands of heavy rain from the tropical storm lashed Florida’s east coast.

The U.S. National Hurricane Center issued a hurricane warning from South Santee River, South Carolina, to Surf City, North Carolina, in its 5 a.m. advisory. Tropical Storm Isaias had maximum sustained winds of 70 mph (110 kph) and was expected to strengthen into a Category 1 hurricane, with winds of 74 mph (119 kph) or more.

“We are forecasting it to become a hurricane before it reaches the coast this evening,” senior hurricane specialist Daniel Brown said. “It’s forecast to produce a dangerous storm surge, of 3 to 5 feet (0.9 to 1.5 meters) in portions of North and South Carolina.”

Isaias — pronounced ees-ah-EE-ahs — could bring heavy rains, too — up to 8 inches (20 centimeters) in spots as it moves up the coast, Brown said —and “all those rains could produce flash flooding across portions of eastern Carolinas and mid-Atlantic, and even in the northeast U.S.”

Forecasters said Isaias was still centered east of Jacksonville, Florida, and 280 miles (455 kilometers) south-southwest of Myrtle Beach, South Carolina, but was expected to speed up Monday as it moved north.

Over the weekend, Isaias brought heavy rain and flooding to Florida as officials kept a close eye on the storm while dealing with surging cases of the coronavirus.

The storm had weakened from a hurricane to a tropical storm on Saturday afternoon, and its most damaging winds remained offshore.

“Don’t be fooled by the downgrade,” Florida Gov. Ron DeSantis warned at a news conference after the storm spent hours roughing up the Bahamas. DeSantis said that with Florida entering the season’s most active time for hurricanes, residents should have a week’s supply of water, food and medicine on hand.

“We were expecting a hurricane to develop and it didn’t,” Stewart said Sunday. “It’s a tale of two storms. If you live on the west side of the storm, you didn’t get much. If you live east of the storm, there’s a lot of nasty weather there.”

Isaias then snapped trees and knocked out power as it blew through the Bahamas on Saturday. Officials in the Bahamas opened shelters for people in Abaco island to help those who have been living in temporary structures since Dorian devastated the area, killing at least 70 people in September 2019.

Authorities closed Florida beaches, parks and virus testing sites, lashing signs to palm trees so they wouldn’t blow away. Officials also adapted their shelter policies to the pandemic, providing spaces where people could stay safely apart from each other to prevent the spread of the virus.

In Palm Beach County, about 150 people were in shelters, and they were wearing masks, said emergency management spokeswoman Lisa De La Rionda. The county has a voluntary evacuation order for those living in mobile or manufactured homes, or those who feel their home can’t withstand winds.

In Indian River County, north of West Palm Beach, Florida, emergency shelters were clearing out Sunday after Isaias was downgraded to a tropical storm.

Officials told TCPalm newspapers that 38 people registered at three schools used as shelters. Those areas now must be cleaned to ensure no traces of the coronavirus remain as teachers and staff report Monday to prepare for the upcoming school year.

No one checked in with COVID-19 symptoms. Temperature checks were done at the door, officials said, and isolation rooms were designated in case anyone came in with symptoms.

The storm did not affect the successful return of two astronauts aboard the SpaceX Dragon capsule, which splashed down into calm waters in the Gulf of Mexico off the coast of Pensacola. Test pilots Doug Hurley and Bob Behnken rode the capsule back to Earth less than a day after departing the International Space Station and two months after blasting off from Florida. 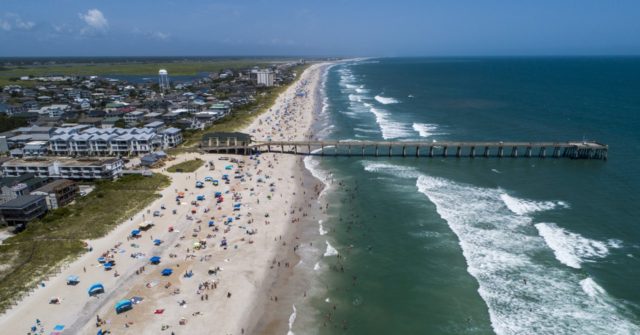 The eye wall is about 50 miles south of me headed this way. It will probably completely break up before getting here. We are all set here.

Developing Flames are shooting 20 to 30 feet into the air now! Likely many houses involved. Hopefully everyone got out safely! #ncwx #Isaias

BREAKING: Major fire caused by Hurricane #Isaias ongoing near Ocean Isle Beach, North Carolina -- multiple homes engulfed in flames with people trapped; flames are shooting into the air per eyewitnesses. Unknown if there are casualties at this time.