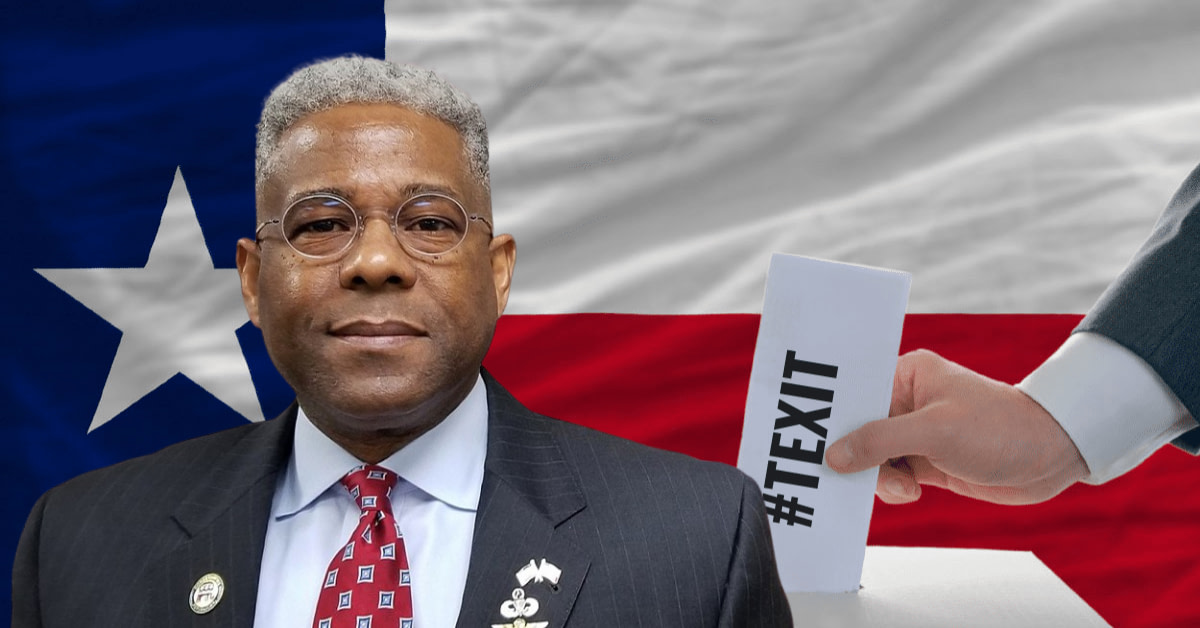 CNN’s cable network has dropped over 50% in viewership since the beginning of the year, so the faltering news outlet is scrambling for new targets to smear. But they picked

CNN’s cable network has dropped over 50% in viewership since the beginning of the year, so the faltering news outlet is scrambling for new targets to smear. But they picked the wrong man and wrong subject to attack – Allen West, Chair of the Republican Party of Texas and TEXIT.
Allen West supports Texans having a voice and a vote for Texas Independence. “I do support the will of the people to be heard and allow the people to vote on this,” he said in December 2020. He embodies what so many other politicians have forgotten – that they are elected to represent the people. Would Allen West cast his vote in favor of secession in a public referendum? Who knows? But he believes in the people’s right to have that referendum, to have an honest public debate, and to let their voices be heard.

The political elite running the United States do not want to hear the voice of the people, so the liberal media is working overtime to fight the growing TEXIT movement. CNN’s experts declare that Allen West made false statements because Texas cannot legally secede.
Well, the TEXIT movement has news for CNN – your “experts” do not know the Constitution or American history.

Article 1 Section 10 of the Constitution lists in specific detail what the States cannot do – leaving the union is not on the list. If the framers believed in a forever-binding contract and wanted to prevent the States from leaving, it would have been a simple matter to add that to the list.
Simple except that they would never have gotten any States to sign on to that document. These States had just fought a bloody war to win their freedom from the tyrannical British Crown. These independent States had just penned the Declaration that read, “…whenever any Form of Government becomes destructive of these ends, it is the Right of the People to alter or to abolish it.”

Within five years of ratifying the Constitution, New England was considering withdrawing from the union – these were men of the founding generation who acknowledged that leaving was not only legal it was their Right.
The Constitution also does not assign the federal government any power to stop a State from leaving the Union. No call for war or retaliation. The Constitution is silent.
In this silence, the Tenth Amendment to the Constitution rings loudly. “The powers not delegated to the United States by the Constitution, nor prohibited by it to the States, are reserved to the States respectively, or to the people.”

The Texas Constitution picks up from there, in Article 1 Section 2: “All political power is inherent in the people, and all free governments are founded on their authority and instituted for their benefit. The faith of the people of Texas stands pledged to the preservation of a republican form of government, and, subject to this limitation only, they have at all times the inalienable right to alter, reform or abolish their government in such manner as they may think expedient.”
Texas does not need the approval or permission of the United States to declare Independence through a peaceful, democratic process. To read more about the constitutionality of TEXIT, including a discussion of the Supreme Court case Texas v. White, you can find research by the Texas Nationalist Movement here: Can Texas Leave the Union?

Contrary to CNN’s claim, TEXIT supporters are also not mistaking TEXIT for an annexation resolution that would let Texas divide into five states. It is a red herring that has no bearing on reclaiming status as an independent nation.
CNN makes the mistake of other opponents of TEXIT, which is to dismiss and trivialize the independence movement. There are two options – the writers either lack intellectual understanding of the constitutional arguments or they are willfully misleading in their representation of both the movement and its proponents, like Allen West.

Allen West was right when he said that “we could go back to being our own republic.” West acknowledges the overreach of the federal government, heightened by the growing number of unconstitutional executive orders. He also indicates that the U.S. seems to already be in an “ideological civil war.” None of these concepts are popular with CNN, but that does not make them untrue.
In fact, CNN’s own attack on Allen West is just one more volley in the ideological battle for Texas Independence. Fortunately, supporters of TEXIT know that we have the force of history and the Constitution on our side.
You must log in or register to reply here.
Share:
WhatsApp Email Link
Top