skoaldiak said:
Whether or not he would be able to take the HCQ/Z cocktail.
Click to expand...

My prayers go out to him and his family. I understand his wife also has it and she is pregnant. He does seem like a decent fellow and placing his countries interest first.

night driver said:
Interesting (to me, a Savage) that they went with the Foreign Secy and not the Home secy. But as I said, I be one of them Savages from across the Pond.
Click to expand...

There is no "protocol" for this as RTE explained it, the UK has no system (like Ireland has) for a VP type position (we have The Tánaiste) instead Johson had picked his Foreign Sec to conduct business if he was incapacitated.

The news on RTE (live broadcast) was explaining that this left the UK in a very uncertain situation because it isn't like the Foreign Secretary suddenly is the "acting" Prime Minister exactly, he sort of is and he sort of isn't.

There were jokes last week that he was the "Designated Survivor" which now don't seem nearly so funny.

My hunch is that he will try to muddle through the next few days until the outcome is clearer if Boris passes away or looks to be unable to perform his job for any length of time; there may have to be something done about an "acting Prime Minister" and I have no idea how that would be handled, followed by a Torry Party vote for a new leader (who would then become the Prime Minister).

I’ll be praying for him. It doesn’t sound good in my opinion. Let’s hope he has access to the Hydroxychloroquin protocols.

Any politician who tells the EU to stick it, leads as a conservative AND gets away with hair like an early 80's punk rocker gets much respect from me. The British are for all intents and purposes America's staunchest ally in the world. They have never wavered in their support of us, and we have maintained steadfast support of them.

I pray he pulls through.

And Melodi, you're right. Jokes about a "designated survivor" definitely aren't funny. That brings up visions of letters of last resort, decentralized UK govt. etc. A scary thought.

My prayers go out to him and his family. I understand his wife also has it and she is pregnant. He does seem like a decent fellow and placing his countries interest first.
Click to expand...

Apologies if this has already been posted. Not endorsing, just throwing it out there. I'd gotten a fair stock of Ivermectin (for worms & bots in horses) for years earlier SARS pandemic fears on dr recommendation...

Rumor has it he has died and it will be announced in the morning.....

Rumor from where??!
N

THAT would be DAMN FAST. Even by CV standards.

Kill A Commie For Mommie

Yeah, I'm betting within 24 hours they'll announce and announce his replacement. Ya know, some guy from Central Europe, has all the answers for the world's problems....yada, yada, yada.

This is really not good
Not good at all

This is unsettling to me.

Pray for the man.

pauldingbabe said:
This is unsettling to me.
Click to expand...

Nope. Not good at all. But- No healing is beyond the source of all healing, and it all works according to his perfect plan, so.... I'll keep praying and keep believing in the light, no matter how dark it feels right now. :: praying ::

I guess we should assume a ventilator then? 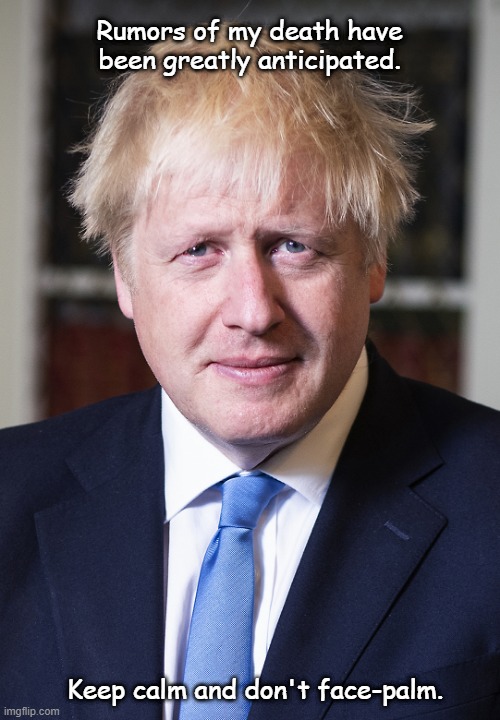 NoMoreLibs said:
Yeah, I'm betting within 24 hours they'll announce and announce his replacement. Ya know, some guy from Central Europe, has all the answers for the world's problems....yada, yada, yada.
Click to expand...

I think the monarch appoints the Prime Minister.

Give him the hydroxy and the zpak!!

They will give him the best care they can and that means putting him in ICU.

Hawkgirl_70 said:
I hope he doesn't need a ventilator. I hope they are giving him the needed antibiotics to stop this quickly.
We don't need any dead ally leaders.

What was the statistic of survival around here if on a vent?
I don't remember.
Click to expand...

Dr. Mike was saying it was a 14% survival rate if you have COVID and are put on a vent.

Friggin liberal idiots over there are celebrating this on social media, they view this as a win.

Yeah, where’d you hear that from? Seriously?!

Praying for him, his family and GB! 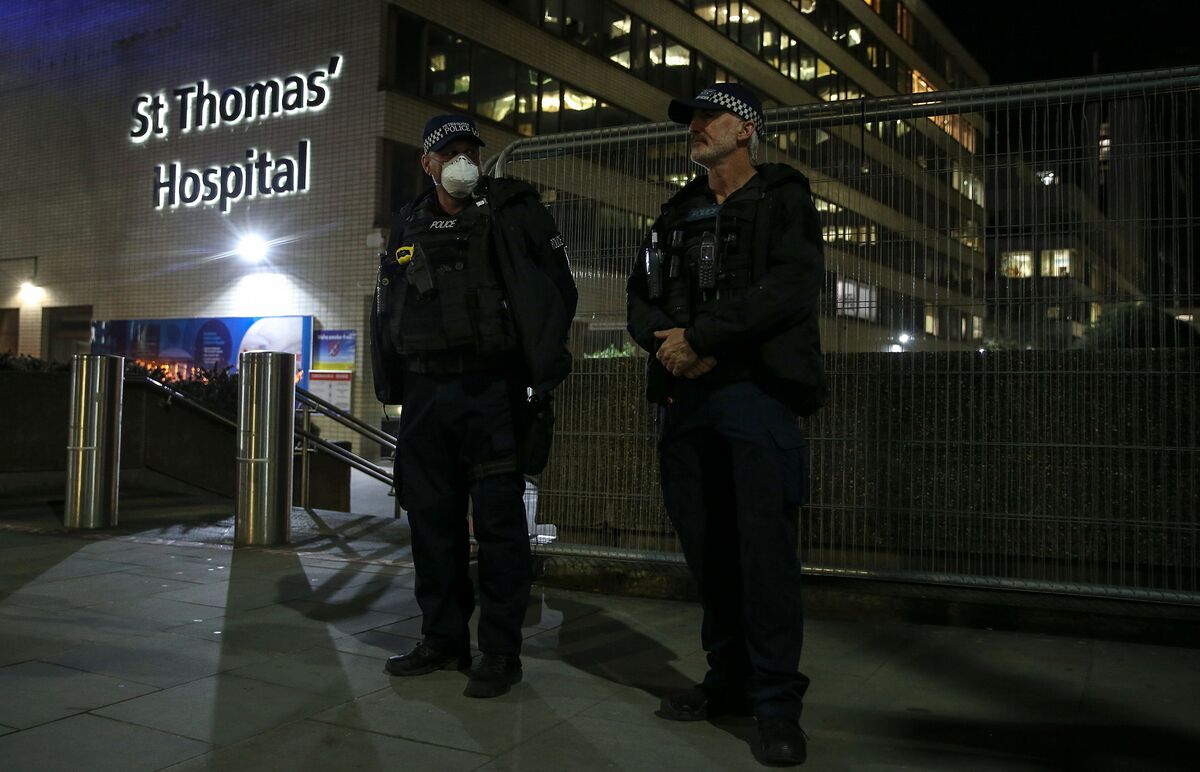 The U.K. is facing a leadership crisis as it heads into the peak of the coronavirus pandemic, with Boris Johnson fighting for his health in intensive care and his government under pressure to get a grip on the outbreak.


The 55-year-old prime minister was taken to the hospital on Sunday night for routine tests after struggling to shake off Covid-19, but his condition worsened during Monday afternoon. The pound fell after the government announced he had been moved to the facility for the most seriously ill patients. 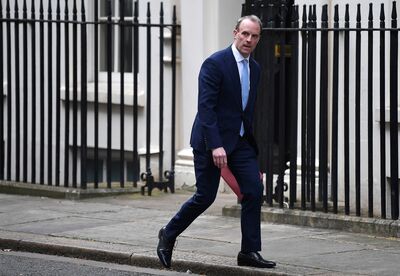 Dominic Raab on April 6.
Photographer: Daniel Leal-Olivas/AFP via Getty Images
Johnson was receiving oxygen treatment at St Thomas’ Hospital in London to help his breathing, but was conscious and not on a ventilator, officials said. Foreign Secretary Dominic Raab is now deputizing for Johnson.

“There’s an incredibly strong team spirit behind the prime minister -- and making sure that we get all of the plans the prime minister’s instructed us to deliver, to get them implemented as soon as possible,” Raab said in a pooled television interview.


The prime minister’s deteriorating health intensifies the difficulties facing the country as it prepares for cases to climb over the next 10 days. More than 5,000 people have died in the U.K. from the virus, and the nation remains in lockdown while the health service attempts to fill shortages of workers and vital medical kit, such as ventilators and protective masks.
Trump Support
It’s an extraordinary turn of events for Johnson. Just over two months ago, he was at the peak of his powers, celebrating Britain’s departure from the European Union after scoring an emphatic election victory.

U.S. President Donald Trump, a supporter of Johnson, said at a press briefing that he’d told pharmaceutical companies to get in touch with London to offer help. Trump cited “rather complex” therapeutic treatments for the virus with “really incredible results,” but didn’t specify them. 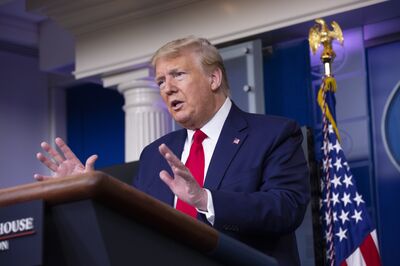 Donald Trump on April 6.
Photographer: Stefani Reynolds/CNP/Bloomberg
“When you get brought into intensive care, that gets very, very serious with this particular disease,” Trump said.

With Johnson out of action, the untested Raab will now need to get a grip on the government machine and coordinate the pandemic response. Britain’s strategy for defeating coronavirus has already come under strain, with ministers accepting they had not done enough to test people for infections.
Johnson himself was criticized by medical experts and members of his own Conservative Party for failing to act quickly enough to close schools and ban public gatherings.
Cabinet Divisions
There have been divisions among Johnson’s officials during his period of isolation already, a situation that risks getting worse with Raab, who was a leadership rival to Johnson last year, now in charge.
Johnson revealed on March 27 that he had tested positive for coronavirus and was going into isolation in his Downing Street apartment. His meals and official papers were left outside his door, but he continued to chair daily crisis meetings via video link.
The premier recorded several “selfie” video messages for social media in recent days in which he insisted he was doing well and remained in charge. At times, though, he appeared short of breath and visibly unwell.
Throughout the day on Monday, Johnson’s officials said the prime minister remained in control of the government and was continuing to keep in touch with his team. He was “in good spirits” on Monday morning after a “comfortable” night, despite a cough and a fever, officials said.
Yet Johnson’s team gave few details when asked what had changed. Reporters raised questions over how seriously ill Johnson was after Raab disclosed that the pair had not spoken since Saturday.
The premier received well wishes from colleagues including his predecessors Theresa May and David Cameron, as well as his chief opponent, Labour Party Leader Keir Starmer. International leaders including Irish premier Leo Varadkar and President Emmanuel Macron of France also sent messages of support.

Johnson’s fiancee, Carrie Symonds, who is pregnant, also had symptoms of the virus and had been isolating.
— With assistance by Josh Wingrove 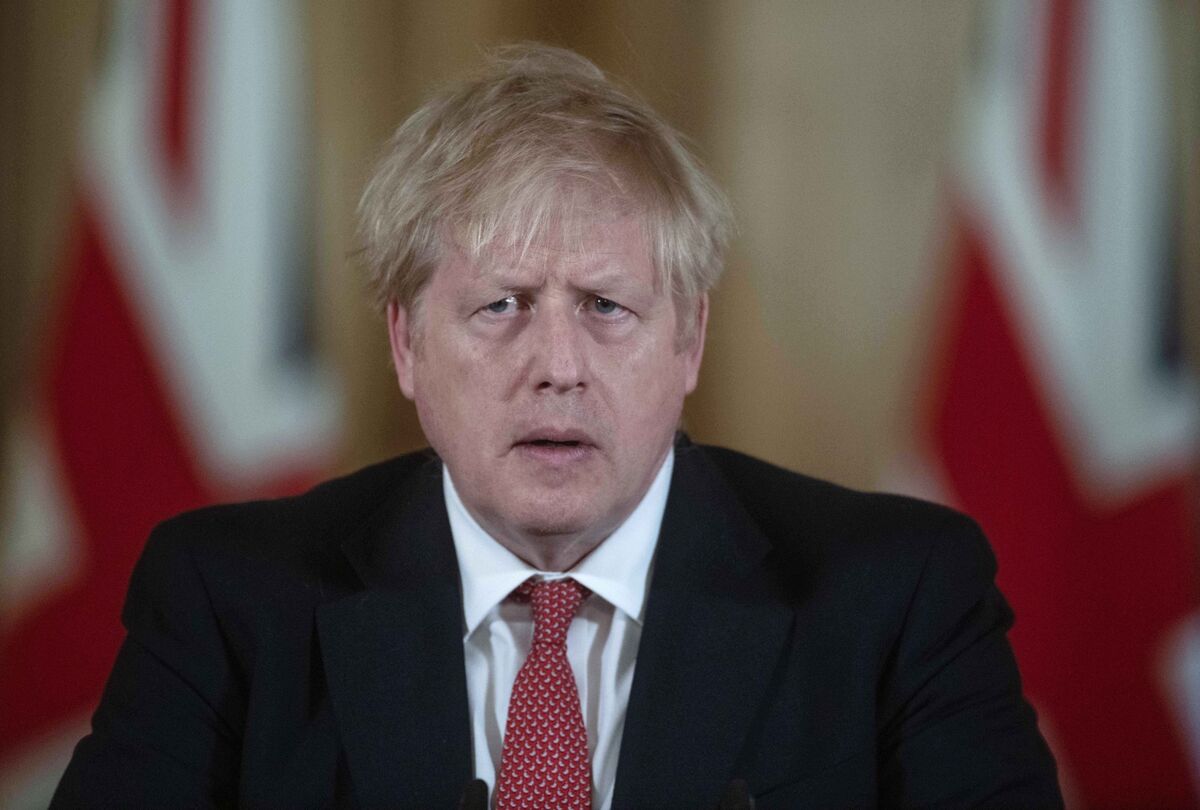 The U.K. is facing a leadership crisis as it heads into the peak of the coronavirus pandemic, with Boris Johnson fighting for his health in intensive care and his government under pressure to get a grip on the outbreak.

LONDON (Reuters) - British Prime Minister Boris Johnson was moved to an intensive care unit on Monday after his coronavirus symptoms worsened though his Downing Street office said he was still conscious.

Britain has no formal succession plan should the prime minister become incapacitated, but Johnson, 55, has asked Foreign Secretary Dominic Raab to deputize for him.
Johnson, 55, was admitted to hospital on Sunday night and had been undergoing tests after suffering persistent coronavirus symptoms, including a high temperature, for more than 10 days.
Downing Street had said he was in good spirits and still in charge, though his condition deteriorated in the early evening and he was transferred at about 1800 GMT to an intensive care unit - where the most serious cases are treated - at St Thomas’ hospital in central London.

night driver said:
THAT would be DAMN FAST. Even by CV standards.
Click to expand...

If so what underlying conditions did he have, aside from not walking lockstep with what the globalists have in store for all of us.

Squib said:
Yeah, where’d you hear that from? Seriously?!

Praying for him, his family and GB!
Click to expand...

From other sites that basically have their own version of Bomb Shelter, they been right before.

You have to wonder if he is even being given the HCQ and the Zithro drugs. Had Britain approved of their use?
W

packyderms_wife said:
Friggin liberal idiots over there are celebrating this on social media, they view this as a win.
Click to expand...

Then they are indeed pretty stupid. The Tories are still in the leadership seat, and Raab ain't no pushover.

Hognutz said:
From other sites that basically have their own version of Bomb Shelter, they been right before.

Jubilee on Earth said:
Well if he dies, that’s a good indicator that none of these awesome anti-vitals or malaria drugs that were supposed to be effective against COVID are worth crap. Because you can bet they’re using everything in their arsenal to cure him.
Click to expand...