_______________
Bill Clinton Says in 'Hillary' Hulu Documentary That He Had Lewinsky Affair to 'Manage Anxiety'
Joshua Caplan
Former President Bill Clinton says his high-profile affair with White House intern Monica Lewinsky was one of the things during his presidency that he did to “manage my anxieties,” according to The Daily Mail.
In the forthcoming documentary, “Hillary,” Clinton recalls how the pressure of being president made him feel like a boxer who had fought 30 rounds and that his fling with Lewinsky was “something that will take your mind off it for a while.”
“Nobody thinks they’re taking a risk,” the former president explains. “That’s not why we do stupid things.”
In 1998, the House of Representatives impeachment Clinton over the affair and was acquitted by the Senate.
Clinton reveals that he first lied to Hillary about what had happened with the then-White House intern, but later came clean after it becomes cleary he wasn’t telling the truth,
“I went and sat on the bed and talked to her. I told her exactly what happened, when it happened. I said I feel terrible about it,” he says. “We’ve been through quite a bit in the last few years. I said I have no defense, it’s inexcusable what I did.”
Hillary recounts that she was “devastated” by the admission and, at first, refused to believe it was true.
“I could not believe it. I was so personally just hurt and I can’t believe this, I can’t believe you lied,” the twice-failed presidential candidate recalled, adding that subsequent marriage counseling was “painful.”
The decisions were “one of the hardest things I’ve ever had to do, but it was necessary,” said the former president. “She deserved it, Chelsea deserved it and I needed it.”
Clinton then apologized to Lewinsky in the four-hour film, saying he felt ‘”terrible” that the affair will follow her for her entire life.
“I feel terrible about the fact that Monica Lewinsky’s life was defined by it, unfairly I think,” he says, before suggesting that she move on from the controversy. “Over the years I’ve watched her trying to get a normal life back again, but you’ve got to decide how to define normal,” he said.
Hillary, a Hulu-produced documentary about her life, is slated for release Friday. 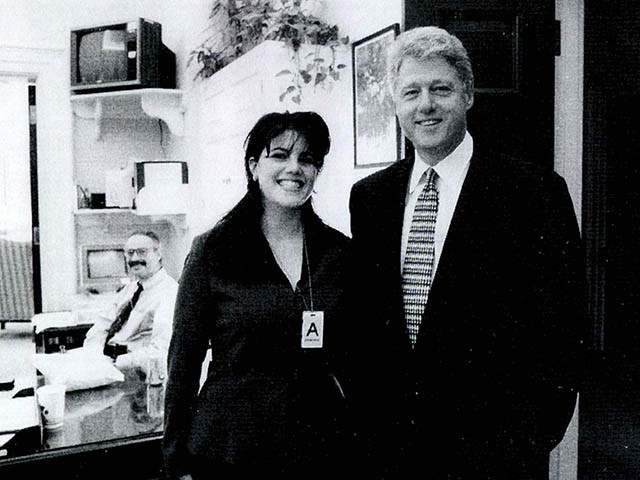 Former President Bill Clinton says his high-profile affair with White House intern Monica Lewinsky was one of the things during his presidency that he did to "manage my anxieties,” according to The Daily Mail.

You sure this shouldn't be tagged with "Snowflake"?

Why does Bill need to come around with his BS now? I was getting used to not hearing anything from him for a while...
S

Billy boy, NOTHING in your entire screwed up life has been "normal", by ANY definition of the word!

Well, he is married to hillary so i can see that.
Mike

He could have just taken a little orange pill for his anxiety...... saved the country a lot of heartache.

But everyone is a victim now (if they are Lefties) and this is the path he is choosing - just shows his other weaknesses...... but being beaten down by his Handler Hillary might make him a bit nervous.

Excuse me? What about the extra-marital crap he was pulling before he got elected, huh?
Oh yeah. Remember 60 Minutes and he and Hillary sitting on a couch being interviewed and she more or less said she forgave him and they put it behind them?

How about all the other women who accused him after that?

He's always been a skirt-chasing skank.

Well I don't consider that an affair, which is neither here nor there. Always found the idea that they had agreed to open marriage believable, in which case, whatever. I don't care what people negotiate between themselves, as long as they don't break the babies. I've even seen such arrangements with ill or out of country partners still meet the metrics for "healthy."
But what I don't get is why is this sewage being floated down the pipeline now?? Please don't tell me it's something to do with another failed bid for presidency by Hillary, because that grosses me out way more than Bill having relations ever could!

So as a married man, I should just tell my wife that I have anxiety and fooled around. Sure... that will work...

Hey Bill, if you couldn't stand the heat, you should have got out of the kitchen

oh, so that is a valid and acceptable excuse now?

I somehow don't think it would fly with fezzik. I think he would mebbe have a problem with it. Lol

What difference does it make ...

What about all the others Bill? And all those trips to Epstein's island. The only "anxiety" you had was being anxious to get there.