SUBSCRIBE
Morag Gamble (https://permacultureeducationinstitut... and https://ourpermaculturelife.com) introduces Pigeon Pea (Cajanus cajan) - a super useful permaculture plant for the soil, in the garden, on the farm and in the kitchen. Pigeon Pea is one of my favourite permaculture plants - it is food, fodder, mulch, compost material, no-dig garden material, and a nurse plant providing shade and shelter for other young and sensitive plants. I'd love to hear about how you use pigeon pea in your garden and also your favourite recipes using both the green and dried peas. Subscribe to receive notice of each new film I make.


SUBSCRIBE
#pigeonpea #permaculture The pigeon pea has to be one of the most versatile permaculture plants. I started growing this legume shrub in my garden because it improves soil fertility and it provides an abundance of food .

Pigeon Peas (Cajanus cajan) are going to replace the yam crop. They're small, short-lived trees that need frost-free climates. If you're not familiar with the name, you've probably eaten them as split peas. The tree produces for three to four years, but each year the return decreases by about half. Jerry replaces them every two years.

Pigeon Peas are not fussy plants. First, he removes any mulch and debris from the soil, allowing it to warm up in the sun. The warmth will improve the Pigeon Pea germination. He's not improving the soil any further, though, as he had previously added plenty of manure for the yams.

He sows three seeds into each planting hole and will then thin those to the strongest plant. He plants them one and a half metres apart. They should start cropping in around five months time. 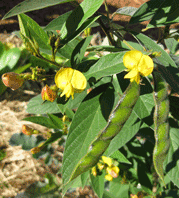 Common Name: Pigeon Pea, Congo Pea, Red Gram
Botanical Name:Cajanus cajan syn. Cajanus indicus
Family: Fabaceae
Plant Description: A woody, leguminous shrub, to 3.6 m, with yellow and red flowers.
Ecology: It is hardy, widely adaptable and tolerant of temperatures as high as 35°C. It can be killed by heavy frost. An average annual rainfall between 600 and 1,000 mm is most suitable. However, it can be grown in humid areas, even over 2,500 mm of rainfall and is renowned for its drought tolerance. It gives economic yields of seeds in areas where rainfall averages about 400 mm annually. Although it cannot withstand waterlogging it can be grown in a wide range of soils, as it tolerates low fertility. Some cultivars are tolerant of salinity and aluminium. A pH range of 4.5 - 8.4 is tolerated.
Uses:
Cultural Requirements 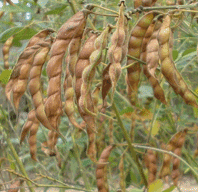 Recommended Planting Time: Spring, or during the wet season, soil temperature should be at least 25°C for germination, a higher soil temperature will give a more even germination.
Planting Depth: It can be direct-seeded, or planted into forestry tubes and later transplanted. Sow the seed 2.5 cm deep.
Details: Soaking seeds overnight will improve germination. Protect young plants from all grazing animals.
Inoculant: A group of bacteria called Rhizobium live in a symbiotic relationship with many legumes. This is a big advantage to the plant, as it is able, once inoculated, to produce its own nitrogen, from the soil air. The bacteria are stored in peat, and as this is a living culture, it must be treated with care. It should be stored in the fridge and used within 3 months. Do not separate from the seed packet as the inoculant attached is specific to the individual legume. To use, moisten the seed with a small amount of milk or water and stir in the inoculant until seeds are coated. Do not inoculate the seed until you are ready to sow it and do not leave the inoculated seed in the sun. Pigeon peas aren’t your typical garden pea. They are a big plant – you could even call them a small tree.
On Saturday Rachel and I walked down to the big patch of pigeon peas we planted last summer and found to our delight it was finally time to start picking.
We stuffed two shopping bags with pigeon pea pods. There are at least two different varieties of pigeon peas growing on our plot. Some have reddish-brown pods, the other has green pods with blotchy red-brown patches.
If you leave the pods on the pigeon pea plants, they mature to a very good dried pea. If you pick them a little earlier, they can be shelled and eaten like regular garden peas. We ended up with a few gallons of green peas after shelling. We also got some dried peas from pods that had already matured on the plants. Last night we had green pigeon peas and rice mixed with saltfish for dinner. That was good. Hearty and healthy.
A Reader Interjects!
But… let me back up a bit. Reader James Paganacci wrote the following on my Survival Plant Profiles page a few days ago:
“I’m not sure if you have grown pigeon peas? They grow nicely in southern Florida (probably ok up north also?) and last a few years. They fix nitrogen and grow in sandy soils. Although they do better in rich organic soil. They don’t transplant very well, have to be careful with the root system or they go into shock and die. They are very easy to grow, prolific and produce a lot of edible seeds. I believe the amino acid profile is pretty good. This plant is a good addition to the survival plant list.”
Yes, I agree – so let’s make this a fully-fledged survival plant profile!
Pigeon Peas: An Excellent Survival Crop
I like having knowledge and success with a plant before I write a profile (though the recent survival plant profile I wrote on stinking toe trees was all based on research, not actual growing hours) which is why I waited for some time to write about pigeon peas.
In North Florida I attempted to grow pigeon peas multiple times and they always succumbed to frost before making more than a few peas. They’re day-length sensitive, which means they won’t flower until the fall and winter… and that spells doom for your crops.
In South Florida or anywhere with frost-free winters they’re a very good option as they fix nitrogen and can handle lousy soil.
Dry pigeon peas are found at Indian grocery stores. They grow readily. Sow them a couple of inches deep and wait a week or two. You can literally hack chunks out of your lawn and plant pigeon peas… and they’ll thrive.
As a further bonus, the hard wood of pigeon pea shrubs fuels rocket stoves like a boss.
Heck, this is another Swiss-army knife plant, so let’s make a list of its attributes.
Pigeon Pea Uses
Storable dry peas
Green peas good as a vegetable
Green manure
Drought-resistant source of calories
Windbreak
Erosion control
Good chop-and-drop for establishing food forests/mulching
Wood useful for firewood
Great forage for animals
Fixes nitrogen
Breaks up hard soil with its strong roots
Can be used to suppress weeds
Good road-side hedge
Impressive, eh? Yeah. They’re awesome.
How to Plant Pigeon Peas
In January Luis Quinones commented on one of my previous pigeon pea posts:
“In Puerto Rico mi grandma use to plant in the same hole at the same timeof planting bush beans sweet corn and pigeon peas. Both the bean and the pea will benefit the corn by fixing the nitrogen in the soil. Plus she fertilize one time only.
1. First to harvest was the beans. Feeding the plants and husk to the goats.
2. Second came the corn. Also feeding the leftovers to the goats and pigs.
3. Last one the pigeon pea. She will do 2 harvest one for green peas and last one for dry peas. Which she store in old one gallon milk only for later use that will last for a year. Then feeding the pigeon pea bushes to the goats.
This is like the 3 sisters system that the American Indian use to do. The difference is they used pole beans, corn and squash.
With the squash you don’t have to weed.
Find your 3 sisters combinations where one plant will benefit from the others.”
I like that idea. I just planted another round of pigeon peas in a new location and am thinking of adding squash/pumpkins to the plot to increase the overall yields. Pigeon peas are a perennial which will produce for a few years, long after the corn and pumpkins are gone.
You can see how I planted the new patch in the video I posted yesterday:

I’m not sure how the corn will do as we really didn’t loosen up much ground and the grass here is tough; however, I know the pigeon peas will take off.
You don’t need to interplant them, either. You can plant them alone. Got a rough patch of ground? Get it going with pigeon peas.
3-4′ spacing is perfect for pigeon peas, as they get big and branch out.
Pigeon Pea Allelopathy
You might not want to grow pigeon peas too close to some other crops, though. A local farmer told me that pigeon peas make other plants around them unhappy and that trees don’t like them.
I thought this was strange as pigeon peas are often recommended by permaculturalists as a great nitrogen-fixing species.
After a little research I discovered they are allelopathic.
According to everyone’s favorite agricultural company:
“As with many other legumes, pigeon pea has been shown to have Allelopathic properties which may inhibit the growth and performance of the following season’s crop. This should be taken into account if large fields are planted.”
I planted pigeon peas around some trees in my North Florida food forest but am unsure whether or not they had an effect on growth, positive or negative.
More tests are obviously needed, but for now I wouldn’t shy away from planting them in developing food forests. They certainly don’t seem to dampen the growth of corn.
Conclusion
Worries about allelopathy aside, I grew pigeon peas in an area of dead sand which had been rendered a mini-desert by goats. The peas thrived and the area was restored to a good gardening spot.
There are plenty of reasons to grow this excellent staple survival crop. It meets the test of being useful for many things, plus it tastes good and provides a good amount of protein unlike many other staples.
If you can grow pigeon peas, do it!
You’ll find more info at Infogalactic.
And at Tropical Permaculture.
And at Kew Royal Botanic Gardens.

Pigeon peas are an excellent survival plant and will grow and thrive where other staples will not. Poir soil? Drought? Hard ground? No problem! Read more:
www.thesurvivalgardener.com
You must log in or register to reply here.
Share:
Facebook Twitter Reddit WhatsApp Email Link
Top