More racist tweets by Cambridge University Professor Priyamvada Gopal have been unearthed, including one in which she spoke about her urge to “kneecap white men.”

Gopal caused controversy last week when she tweeted “white lives don’t matter,” prompting a petition demanding she be fired. However, Cambridge University responded by promoting her to a full professorship, despite the fact that the tweet was censored by Twitter for hate speech.

The media’s reaction was to portray Gopal as the victim of bullying while feigning infinitely greater outrage over a “white lives matter” banner that was flown over a soccer match in Manchester.

More hateful tweets have now been discovered, including one discussion where Gopal states, “I resist urges to kneecap white men every day. So, no **I** am the hero.”


“Can @Cambridge_Uni please recognise that this is completely unacceptable and indefensible? How are her students supposed to feel safe?” asked Emma Webb.

“She’s racist. I think we need to stop this dumbass spiel that minorities cannot be racist because they absolutely can. She is racist and is getting away with because she’s not white. That’s just the fact of the matter,” remarked Dominique Samuels.

Maybe these messages will lead to another petition demanding Gopal’s removal. The first one was deleted by Change.org after receiving over 20,000 signatures.

Cambridge University has stood by Gopal despite previously dismissing Noah Carl after 500 academics signed a letter challenging Carl’s research on race and intelligence.

The institution also previously rescinded its offer of a visiting fellowship to Jordan Peterson after a woke mob complained about his stance on political correctness and after he appeared in a photograph with a man wearing a t-shirt that said “I’m a proud Islamophobe.” 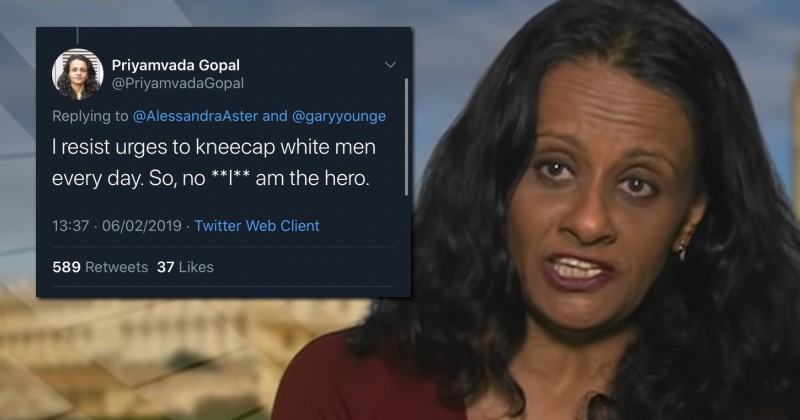 Hmm. I don't think I would resist the urge to step on her foot. Crushed medial arch will significantly affect one's posture. She may be into orthopedic footwear for life.

Dare I say this will detract from her enjoyment of life considerably more than the white experience?

If I made statements like this about kneegros I'd be facing 'hate crime' charges. Funny how that works.....

When even Twitter censors a black person you KNOW it's bad.

I really wish these morons would stop cutting us breaks and do what their flesh is telling them to do.

Anti-Liberal said:
I really wish these morons would stop cutting us breaks and do what their flesh is telling them to do.
Click to expand...

Indeed. Let's cut out the foreplay and get down to it...

Professor Priyamvada Gopal loses her girl card the moment she wants to get physical with me, or a lot of men. Wanna try the kneecapping stunt, lady? I can assure you it won't work out well.

Enjoy your trip to the ER, kiddo. The morphine drip might be fun...

_______________
She's a lot more likely to be attacked by some muzzie man, and I sincerely hope that there are white men present so she can feel the desperation of wishing she could be rescued by them.

Every day, I resist the urge to fly through the computer and smash people like her in their ugly snot lockers.

And then bang their head on the concrete sidewalk like I did to Judy when I was 13.

Elza said:
If I made statements like this about kneegros I'd be facing 'hate crime' charges. Funny how that works.....
Click to expand...

Agreed. A LOT of nonlibtard whites likely had to resist the urge to do something nonconsensual to Hussein Obama when the latter illegal alien infested the White House. This event made me think that God may not yet have given up on the U.S.:

mzkitty said:
Every day, I resist the urge to fly through the computer and smash people like her in their ugly snot lockers.

And then bang their head on the concrete sidewalk like I did to Judy when I was 13.

Same here. Although, when I was 14, I slammed a Coke bottle across another girls face. Knocked her front teeth loose. Served her right, too. I might be petite, but I know how to take care of myself if push comes to shove.

Oh crap, did you see the pic of the “professor”?

Mighty white of her to resist her evil urgings.

Squib said:
Oh crap, did you see the pic of the “professor”?

CAUSE YOU'D BE IN JAIL

Elza said:
If I made statements like this about kneegros I'd be facing 'hate crime' charges. Funny how that works.....
Click to expand...

FYI: this “prize package” is Indian, not black. She looks like a reject from the “untouchable” caste to me: No Escape From Caste On These Shores, 'Untouchables' From India Say
D

The joys of Empiah in formerly great Britain. At least I don't live there....
F

Wonder how that bitch would react if she needed EMS care and the EMTs were 2 white men?

From that wonderful, peaceful, tolerant environment in Seattle...

The funny thing is black people would view her as white! I'm guessing she's a lesbian.

From that wonderful, peaceful, tolerant environment in Seattle...
Click to expand...

who was that, and what was the story?

Yep, and in most black people's minds she's white, not a brown or black.
P

hunybee said:
who was that, and what was the story?
Click to expand...

Not a tremendous amount of info; here's what I was able to glean off the intertubes: 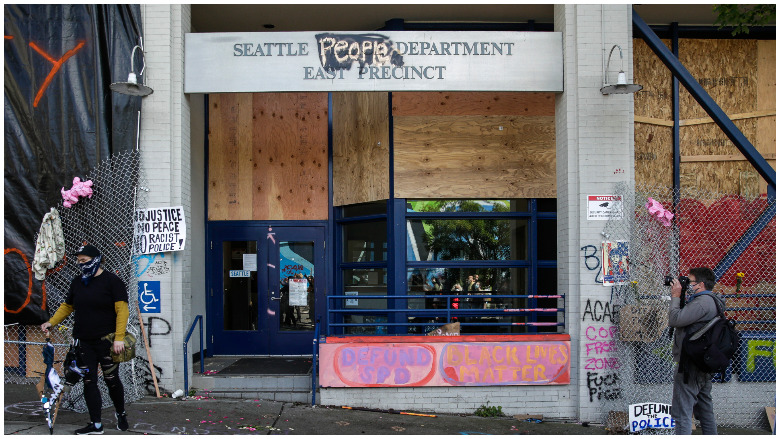 Seattle Autonomous Zone Videos: What It’s Like Inside the CHAZ

Videos from inside the Seattle Autonomous Zone give a sense of life inside the "CHAZ."

Even if they THINK you MIGHT not be 150% for them, they would gut you like a fish if they could
W

She is a RECTUM!!

That forehead would stop a Mack Truck. (and a clock)

I prefer "call center, not casino", but YMMV.

waterdog said:
She is a RECTUM!!
Click to expand...

Just a mud/mystery meat. No need to get scatological on us.

MinnesotaSmith said:
Just a mud/mystery meat. No need to get scatological on us.

I can't spell them big words, but I understand that logical part. Heh Heh

The Snack Artist said:
That forehead would stop a Mack Truck. (and a clock)
Click to expand...

You mean one of these?

Why doesn't she say it?

These tools won't realize this crap will follow then to the end of their days until it is too late....
S