There is an old rhyme once used in economics books.

"Money is a matter of functions four: a medium, a measure, a standard and a store.”
Click to expand...

Three of these functions are clear.

A medium of exchange is what people use to pay for goods.

A measure means that money is a way of measuring economic value: the unit of account. Suppose a business has 100 units of money worth of assets at the start of the year. At the end of the year, it has 110 units. It has earned a profit of 10 units. Of course, this calculation is only meaningful if money measures value accurately.

Storing value is the flip side of this same coin. If someone holds 100 units of money for a year—or ten years—he should have the same amount of value at the end.

Let’s just say that it’s now clear why this old verse is no longer so popular in the textbooks favored by the monetary central planners. The dollar is terrible at holding its value, and they’d rather that people not be aware of this once-common bit of knowledge.

The fourth is the least well understood and is sometimes omitted from discussion entirely. And when it is mentioned, it’s often a confusing idea of paying for goods at a later date. For example, the Wikipedia entry for Standard of deferred payment says:

“In economics, standard of deferred payment is a function of money. It is the function of money of being a widely accepted way to value a debt, thereby allowing goods and services to be acquired now and paid for in the future.[1]”
Click to expand...

The citation is to a page of something called Encyclonomic Webpedia. The first heading is:

Where do consumer goods come from?

This is a non-trivial question. If a nation’s economists do not answer it, or answer it improperly, then it will lack consumer goods. See Venezuela for the most current example.

Consumer goods have to be produced. And, unless we’re talking about grandpa whittling a wooden whistle for a boy to play with, production means manufacturing at large scale. Large-scale manufacturing means a factory building filled with machines. This has to be financed.

Financing means people lend it money. Lending means they saved some of their income, in order to lend and earn interest.

This is the real meaning of the fourth function of money. It is the standard for financing productive enterprise, and of extinguishing the debt.

Financing: Then vs. Now

Historically, gold was used to finance productive ventures. However, by the 20th century the ideas of socialism were on the march. On the eve of launching the first world war, many then-powerful nations undermined gold, shackling it with restrictions that impaired its ability to do its job. No, gold did not cease to be acceptable to purchase consumer goods. It did not cease to hold its value. And it did not stop working as a measure of business success.

It was its function of creating and extinguishing credit which was attacked.

After that war, there was a boom (more in America than in Europe) and a terrible depression followed. Naturally, the gold standard was blamed. John Maynard Keynes called the gold standard a “barbarous relic” even before the depression. Milton Friedman blamed the Fed—but in a backhanded way—for not printing enough money.

A second, even more terrible, war was launched. At the end of that war, the Allies agreed to an insane idea: to treat the US dollar as if it were gold. Monetary imbalances grew, and with them foreign government’s desire to redeem their dollars for gold.

Naturally, President Nixon (under the advice of Friedman) defaulted on the US government’s obligations, and simultaneously plunged the world in the regime of irredeemable currency, which people call money, despite its manifest failure to perform the functions of measure, standard, and store. The dollar’s lossy-ness is deemed a feature, not a bug. Debasement is supposed to nudge people to the will of the central planners.

So it was again allowed to perform its function of store of value. However, after four decades, it was out of use as a medium, and out of favor as a measure. And no longer in use at all to create and extinguish credit.

Before Monetary Metals, it was almost inconceivable (yeah, yeah, Inigo Montoya, we hear ya) that gold would once again be used to finance production. Or that anyone would seek a gold yield on their gold (a different thing than a dollar gain by selling their gold at a higher price).

The belief within the gold community was that such a concept makes no sense. Their take is that a gold owner is going to profit by gold’s rise to $50,000 (or insert your favorite number here), so who cares about earning a few percent in interest? Businesses should borrow in dollars, because as dollars go down in value, they can repay in cheaper money later.

The belief outside the gold space is also that it makes no sense.

But on December 24, 2020, a group of investors from around the world disagreed with the consensus. They lent their gold to a productive enterprise.

This is the first time that such a gold bond has existed in nearly a century. To commemorate this monetary inflection point, we printed the investors’ bond certificates on 24K gold Aurum® material (which is manufactured by our friends and client Valaurum).

Here is a photo of my certificate (yes, I put 50 ounces of my own gold into the deal). 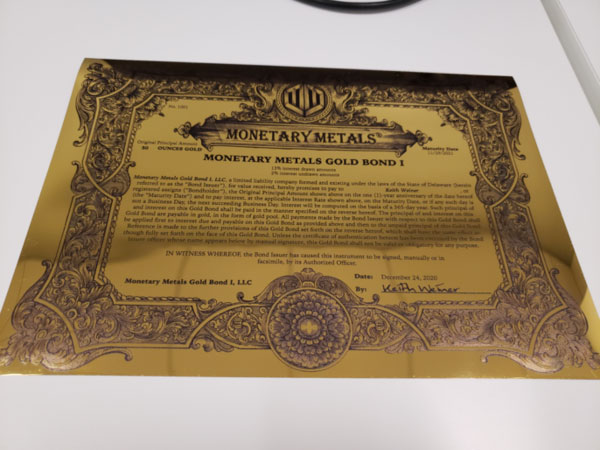 Keith Weiner is CEO of Monetary Metals, a precious metals fund company in Scottsdale, Arizona. He is a leading authority in the areas of gold, money, and credit and has made important contributions to the development of trading techniques founded upon the analysis of bid-ask spreads. He is founder of DiamondWare, a software company sold to Nortel in 2008, and he currently serves as president of the Gold Standard Institute USA. Weiner attended university at Rensselaer Polytechnic Institute, and earned his PhD at the New Austrian School of Economics.
T

IIRC, Charley DeGaulle led the charge against US gold and the other's followed. Soon our gold balance started going down because our balance of payments had more money go out than coming in. The only way to reverse it was high tariffs so our balance of payments would have a positive balance instead of the negative one that was leading to a surplus of $ overseas. Naturally nobody supported that so Nixon abandoned gold.
You must log in or register to reply here.
Share:
WhatsApp Email Link
Top