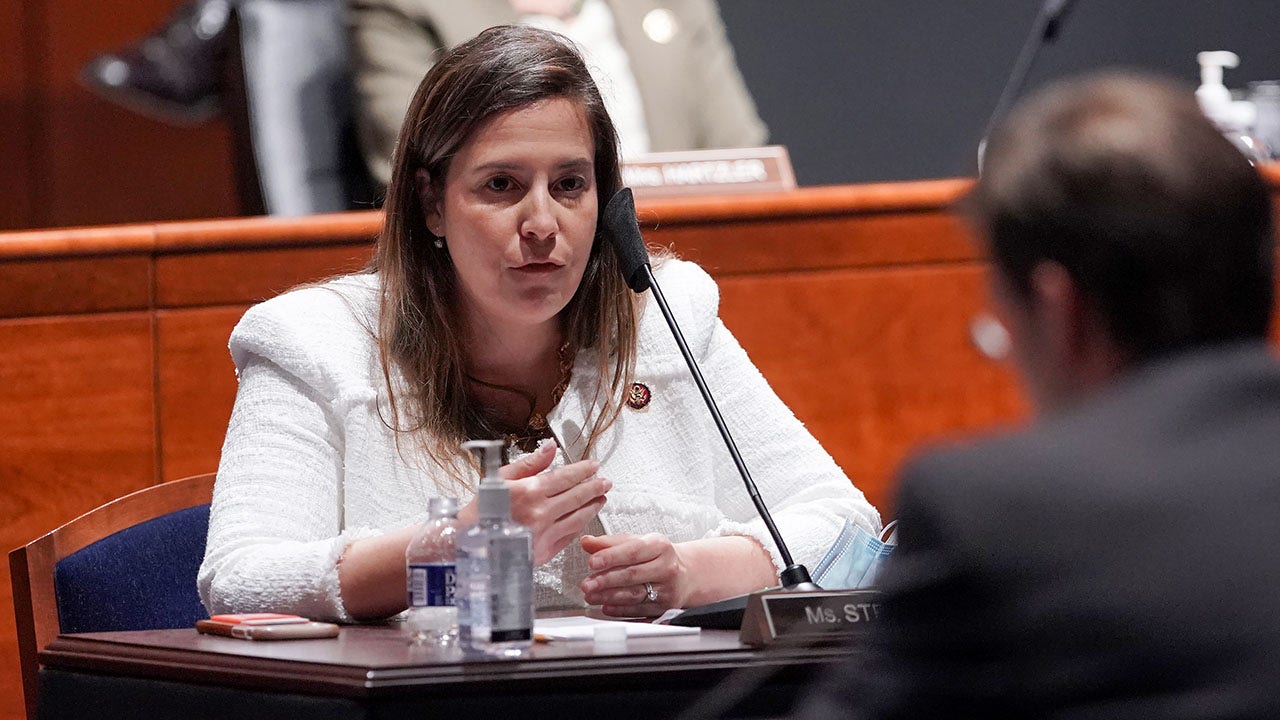 Karoline Leavitt, Stefanik's communications director, in an interview with Fox News Tuesday morning, said she was given no explanation from Twitter after she was locked out of her account Wednesday night.

"This has been reversed, and the account has been reinstated," the spokesperson said. "The account's followers will take 24-48 hours to fully restore." 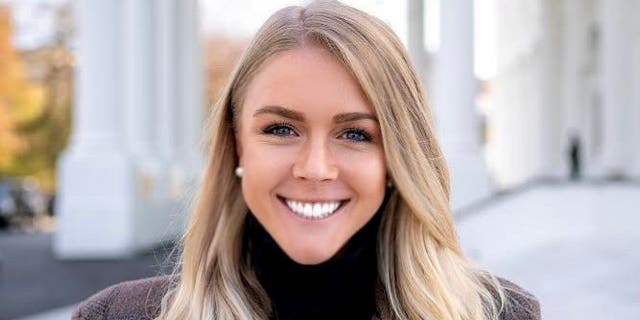 Karoline Leavitt, communications director for Rep. Elise Stefanik, was suspended from Twitter Wednesday night. (Karoline Leavitt)
"The only reason I can think that Twitter would have suspended me is that I followed several Republican members of Congress and GOP activists at once last night, and within minutes, my account had been suspended," Leavitt told Fox News. 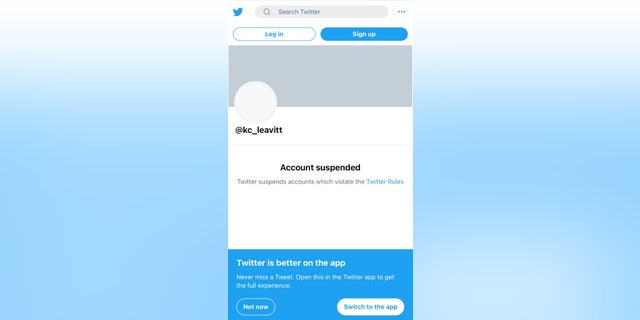 Leavitt, who worked at the White House during the Trump administration, said her last posts were all related to Stefanik's efforts to replace Rep. Liz Cheney as House Republican Conference chair, including a retweet of a post previewing Stefanik's interview on Steve Bannon's show. 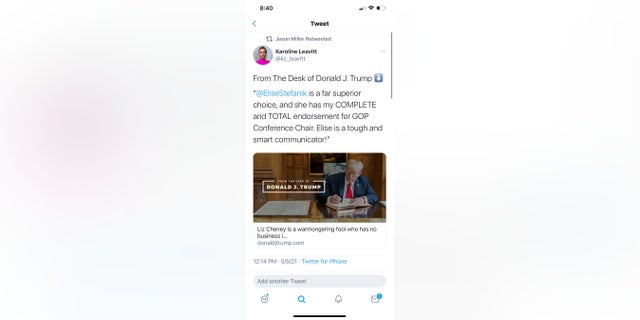 "Republicans have been screaming from the rooftops for months that if they can silence the president of the United States, they can silence you," Leavitt continued. "That is not just a Republican talking point. That is the truth. That’s what’s happening here."

Leavitt said she is the "spokesperson for an official member of Congress going through one of her most contested news cycles in her career."

"I need access to the platform," she said. "The fact that Twitter is suspending me for no rhyme or reason is insane."

Stefanik herself weighed in, breaking the news of Leavitt’s suspension.

"BIG TECH on the MOVE! Twitter just suspended my Communications Director," Stefanik tweeted, calling it an "unconstitutional overreach SILENCING our voices and freedom of speech."


"Republicans are united in fighting back against Big Tech’s tyranny," Stefanik said. "Millions of Americans will not be silenced!"

The move comes just a day after Facebook’s Oversight Board decided to uphold Trump’s ban from Facebook and Instagram, which Facebook instated in January. The board, though, said it was "not appropriate" for Facebook to impose the "indeterminate and standardless penalty of indefinite suspension," and gave the company six months to review the decision of whether to ban Trump for good.

Trump, this week, rolled out a new communications platform, which allows him to post comments, images and videos, and allows followers to share the former president's posts to Twitter and Facebook, though it does not have a feature letting users reply or engage with Trump's posts.

"In a time of silence and lies, a beacon of freedom arises. A place to speak freely and safely," a video announcing the new platform said. "Straight from the desk of Donald J. Trump."

The technology is powered by Campaign Nucleus — the "digital ecosystem made for efficiently managing political campaigns and organizations," created by Trump's former campaign manager Brad Parscale.

Meanwhile, Stefanik, R-N.Y., has been making calls to gin up support for a challenge to Cheney, R-Wyo., Fox News confirmed this week. She has gained the support of top House Republicans as well, including Minority Whip Steve Scalise, R-La.

"House Republicans need to be solely focused on taking back the House in 2022 and fighting against Speaker Pelosi and President Biden's radical socialist agenda, and Elise Stefanik is strongly committed to doing that, which is why Whip Scalise has pledged to support her for Conference Chair," Scalise spokesperson Lauren Fine told Fox News.

Trump also said he supports Stefanik for the leadership post.

Trump called Cheney a "warmonger" with "virtually no support left in the Great State of Wyoming," and repeated his past false statements that the 2020 presidential election was stolen. Cheney has repeatedly pushed back on Trump's false statements about the election.

"Liz Cheney is a warmongering fool who has no business in Republican Party Leadership," Trump said. "We want leaders who believe in the Make America Great Again movement, and prioritize the values of America First. Elise Stefanik is a far superior choice, and she has my COMPLETE and TOTAL Endorsement for GOP Conference Chair. Elise is a tough and smart communicator!"

The suspension was no accident. I was done due to the support of Trump. They are still working hard to make a President and leader of a party a non-person.

What surprises me is that they re-instated the account. I would have expected them to wait until after the new chair was selected.

That'll shut her up early. They just want to flex their censorship muscle and show that they're in control.

greysage said:
That'll shut her up early. They just want to flex their censorship muscle and show that they're in control.
Click to expand...

Twitter would cancel Galileo if he said Trump revolves around the sun.

No wait - something is not right...

But its not what I wrote...

greysage said:
That'll shut her up early. They just want to flex their censorship muscle and show that they're in control.
Click to expand...

To bad so many people are addicted to social media....
Just walk away

Notice they ALWAYS cancel in error the Republicans. This never seems to happen to Dims. NEVER!

Twatter ... twitter ... whatever ... never used it ... or any other social media platforms. Life is good

Repeat the lie that the January 6th false flag operation was a riot/insurrection until it becomes fact.

Trump called Cheney a "warmonger" with "virtually no support left in the Great State of Wyoming," and repeated his past false statements that the 2020 presidential election was stolen. Cheney has repeatedly pushed back on Trump's false statements about the election.
Click to expand...

Repeat the lie that the election was not stolen until it becomes the truth.

If you look you will see that every nooz article that can even remotely mention those two subjects will always state the riot/insurrection and false claims. The go along to get along crowd will swallow those whoppers hook line and sinker.

Nor have I and I never intend to.
You must log in or register to reply here.
Share:
WhatsApp Email Link
Top