POL The Subjugation of the Deplorables 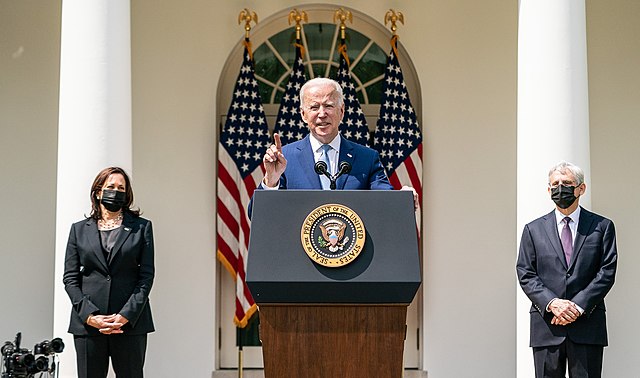 The Subjugation of the Deplorables

The Subjugation of the Deplorables
Josh Hammer

Biden_delivers_remarks_on_gun_control_measures
They know it’s illegal. They just don’t care.
On June 27, 2019, the Supreme Court handed down its ruling in Department of Commerce v. New York, a case pertaining to the Trump-era Census Bureau’s decision to ask census recipients if they were U.S. citizens. The majority opinion, written by Chief Justice John G. Roberts, was one of the most tortured pieces of legal writing in decades.

The Court, playing the role of mind reader, flatly dismissed the Department of Commerce’s cited reasons for including the citizenship questionnaire as “pretextual.” Justice Clarence Thomas, in dissent, aptly summed up what the Roberts-led majority had done: “For the first time ever, the Court invalidates an agency action solely because it questions the sincerity of the agency’s otherwise adequate rationale.”

New York was an astonishing ruling—an unadulterated judicial power grab in the face of an executive agency issuing apropos rules quite clearly within its constitutional ambit. At the time, and in light of such a brazen attempt by the judicial branch to hijack the functions of the executive, some of us urged President Trump to “pull a Lincoln”—that is, refuse to obey the ruling except as it pertained to the named party (here, New York State) in the lawsuit. Unfortunately, Trump did not heed our advice.

Fast forward two years later, and it appears President Biden is more interested than Trump was in defying the Court as a procedural matter—despite the fact that, unlike Trump, he lacks any compelling justification whatsoever to do so.

On June 29, 2021, in Alabama Association of Realtors v. Department of Health and Human Services, a divided Court refused to nix the eviction moratorium issued during COVID by the Centers for Disease Control and Prevention. The decisive vote came from the mercurial Justice Brett Kavanaugh, who said that although CDC “exceeded its existing statutory authority” with the “emergency” nationwide moratorium decree, he would “vote at this time” to deny the realtor plaintiffs application anyway, because, well, reasons. Or politics. Or something else non-legal. Hand waving accomplished, Kavanaugh concluded with a direct plea for Congress to get moving: “clear and specific congressional authorization (via new legislation) would be necessary for the CDC to extend the moratorium past July 31.”

July 31 came, and Congress predictably did not act. Even more predictably, the Biden administration did not care. They opted instead to move full speed ahead and flip two large middle fingers at the Court. American Mind Managing Editor Seth Barron summed it up well: “President Biden—contravening his own insistence that he was powerless to act—simply told the CDC to impose a new moratorium, even though the Supreme Court has already indicated that it was illegal.”

This was not the action of a careful and prudential statesman seeking to preserve the integrity of the rule of law and channel the common good of the whole. It was the reckless, impetuous action of a career politician drunk on power. It was, as fate would have it, also a telling precursor to Biden’s astonishing recent assault on Congress’s plenary legislative prerogative. There, he unilaterally decreed that the Department of Labor somehow mandate nationwide vaccination or testing requirements for all employers of 100 or more persons. One could try in vain to pinpoint such an alleged presidential power in Article II of the constitutional text—it is not there. Elites to the rule of law: drop dead.

That is not “pulling a Lincoln.” Lincoln nobly defied an overzealous judiciary and narrowly recalibrated the constitutional balance of powers to chasten it. What Biden did amounts to brazen, arrogant illegality—a crude will to power masquerading under the guise of a faux “compassion” for tenants harmed by the largely self-inflicted COVID-era economic crash.

Never mind that, a year and a half after the commencement of the March 2020 lockdowns, and in the face of mounting inflation, Americans have stubbornly managed to stabilize the economy. Never mind that myriad struggling mom-and-pop landlords are irreparably harmed by an arbitrary, zero-sum handout to tenants at the expense of landlords. And never mind that, as constitutional scholar Eugene Kontorovich wrote last month, the Biden administration was “clearly using a public health emergency as a substitute for economic legislation—and this is what the moratorium always was.”

As Kontorovich concluded, the eviction moratorium—both in its initial decree and its lingering vitality—was always a quintessential example of Rahm Emanuel’s injunction to “never let a serious crisis go to waste.” But the COVID era has furnished countless examples of progressive governance-by-crisis, from the local or municipal level to the state and national level.

Everywhere one looks, going back to those first two weeks of “15 days to slow the spread,” COVID has legally emboldened a pan-institutional ruling class that was already champing at the bit to consolidate its ideologically monolithic rule and subjugate all free-thinking “deplorables” who so much as seemed hesitant to advance it.

As the 2021-2022 school year begins, this subjugation can be expected to rapidly accelerate and metastasize. Ron DeSantis, stalwart governor of my new adopted home state, Florida, now finds himself in the midst of intense litigation for the right to—wait for it—leave masking decisions for elementary school-age children in the hands of parents, not the left-wing public school foot soldiers. This, notwithstanding the rudimentary truism of our federalist constitutional structure that sovereignty below the federal level inheres in states and not their various municipalities, let alone those municipalities’ public school bureaucrats. That basic principle did not stop Leon County Circuit Judge John Cooper, whose ruling had to be stayed by Florida’s First District Court of Appeals.

But why should it? None of this is actually about the rule of law. It is about two things: power tout court, and preferential allocation of scarce, zero-sum resources so as to benefit the Left’s favored groups (such as aggrieved tenants and teachers unions) and punish the Left’s disfavored groups (such as landlords and parents skeptical of the benefits of forcing their young children to wear a face diaper in school all day). That is what matters to folks like President Biden and Judge Cooper.

Against this backdrop, the deplorables’ imperative to fight back revolves around four core tenets. First, at a most basic level, understand what time it is in this late-stage republic. The oligarchs of our ruling class are not going away, and they have seized an enormous amount of control over what was once our robust system of government. The hour is very late.

Second, and relatedly: reconceptualize our side’s own approach to the rule of law. To borrow from David Azerrad, we need to get comfortable wielding the levers of state power as our opponents do, to “reward friends and punish enemies.”

Third, use familiar litigation processes to strategically advance our causes when opportune moments to push back against COVID hysteria arise—and they will. One benefit of being in the political opposition is that we have no shortage of donor-funded public-interest conservative litigation shops, such as the excellent Stephen Miller-led America First Legal; reach out to them and cultivate their resources.

Fourth, relocate as much as possible to safe red states, such as Texas, Florida, and Tennessee, where the arm of the ruling class’ Leviathan is less likely to pose an existential danger and where active Republican attorneys general offices will sue the Democratic-held Leviathan on behalf of the deplorables for the mere right to be left alone—and do so posthaste.

The COVID era has revealed the extent to which our elites no longer even deign to care about a “neutral” rule of law that respects and protects all our fellow countrymen. We deplorables no longer have any time to waste in pushing back against their excesses. So survey the landscape, stop clinging to vestigial notions of a bygone nonpartisan legal “neutrality,” strategically sue to protect our most basic rights, and get off your butt and move to red states. If not now, then what are you possibly waiting for?


Josh Hammer is Newsweek opinion editor, a research fellow at the Edmund Burke Foundation, a syndicated columnist, and a 2018 John Marshall Fellow with the Claremont Institute.

Despite my agreement with a lot of the article, I am completely disturbed by so many people expressing their belief that the "system" will auto-correct itself, or that with a specified input - we can go back to the "recent" past & resurrect a state of affairs in .gov -- that is already PAST. Perhaps EVENTUALLY that will be possible.

But there is a whole lot of agony & time between accepting that the SOP of the rule of law and gov acting in anyone's interest but their own is GONE -- and that someday, maybe, eventually.
H

That is a good article. Being from Oregon I find that you just need to surround yourself with like minded people. At the beginning of this they said that nothing in Harney County seemed to change that was on the news they were tracking cars or phones I do not know which. Within a week the news changed to they are just different in Harney County and we have not been mentioned since. People live here(10th) largest county by area in the US. 8000 people because we don't want to be like them. Even in a liberal state as this they just don't want to go there.