Envr Strange waves rippled around the world, and nobody knows why

From Nat'l Geo...interesting occurrence - but perhaps we just didn't have the equipment to detect before?

Strange waves rippled around the world, and nobody knows why
Instruments picked up the seismic waves more than 10,000 miles away—but bizarrely, nobody felt them.

On the morning of November 11, just before 9:30 UT, a mysterious rumble rolled around the world.

The seismic waves began roughly 15 miles off the shores of Mayotte, a French island sandwiched between Africa and the northern tip of Madagascar. The waves buzzed across Africa, ringing sensors in Zambia, Kenya, and Ethiopia. They traversed vast oceans, humming across Chile, New Zealand, Canada, and even Hawaii nearly 11,000 miles away.
These waves didn't just zip by; they rang for more than 20 minutes. And yet, it seems, no human felt them.

Only one person noticed the odd signal on the U.S. Geological Survey's real-time seismogram displays. An earthquake enthusiast who uses the handle @matarikipax saw the curious zigzags and posted images of them to Twitter. That small action kicked off another ripple of sorts, as researchers around the world attempted to suss out the source of the waves. Was it a meteor strike? A submarine volcano eruption? An ancient sea monster rising from the deep?

“I don't think I've seen anything like it,” says Göran Ekström, a seismologist at Columbia University who specializes in unusual earthquakes.

“It doesn't mean that, in the end, the cause of them is that exotic,” he notes. Yet many features of the waves are remarkably weird—from their surprisingly monotone, low-frequency “ring” to their global spread. And researchers are still chasing down the geologic conundrum.

Why are the low-frequency waves so weird?
In a normal earthquake, the built-up tensions in Earth's crust release with a jolt in mere seconds. This sends out a series of waves known as a “wave train” that radiates from the point of the rupture, explains Stephen Hicks, a seismologist at the University of Southampton.

The fastest-traveling signals are Primary waves, or P-waves, which are compression waves that move in bunches, like what happens to an extended slinky that gets suddenly pushed at one end. Next come the secondary waves, or S-waves, which have more of a side-to-side motion. Both of these so-called body waves have relatively high frequencies, Hicks says, “a sort of ping rather than a rumbling.”

This happened on 11/11. You may or may not remember me saying that I had a dream about a sign flashing 11/11 in front of me.

When I read this story earlier today, I got chill bumps.

Isn't there a wave of dark matter making it's way through our solar system but scientists keep saying that we won't notice it?

Mayotte is an island of volcanic origin in the northernmost Mozambique Channel, about one-half of the way from northern Madagascar to northern Mozambique. Mayotte is part of the Comoro Islands, and like them is the result of a former hot spot, the oldest of the Comoros archipelago, formed about 7.7 mya.[1] Mayotte has an area of 374 square kilometres, and a coastline of length 185.2 km. Its maritime claims are an exclusive economic zone of 200 nautical miles, and a territorial sea of 12 nm.
https://en.wikipedia.org/wiki/Geography_of_Mayotte 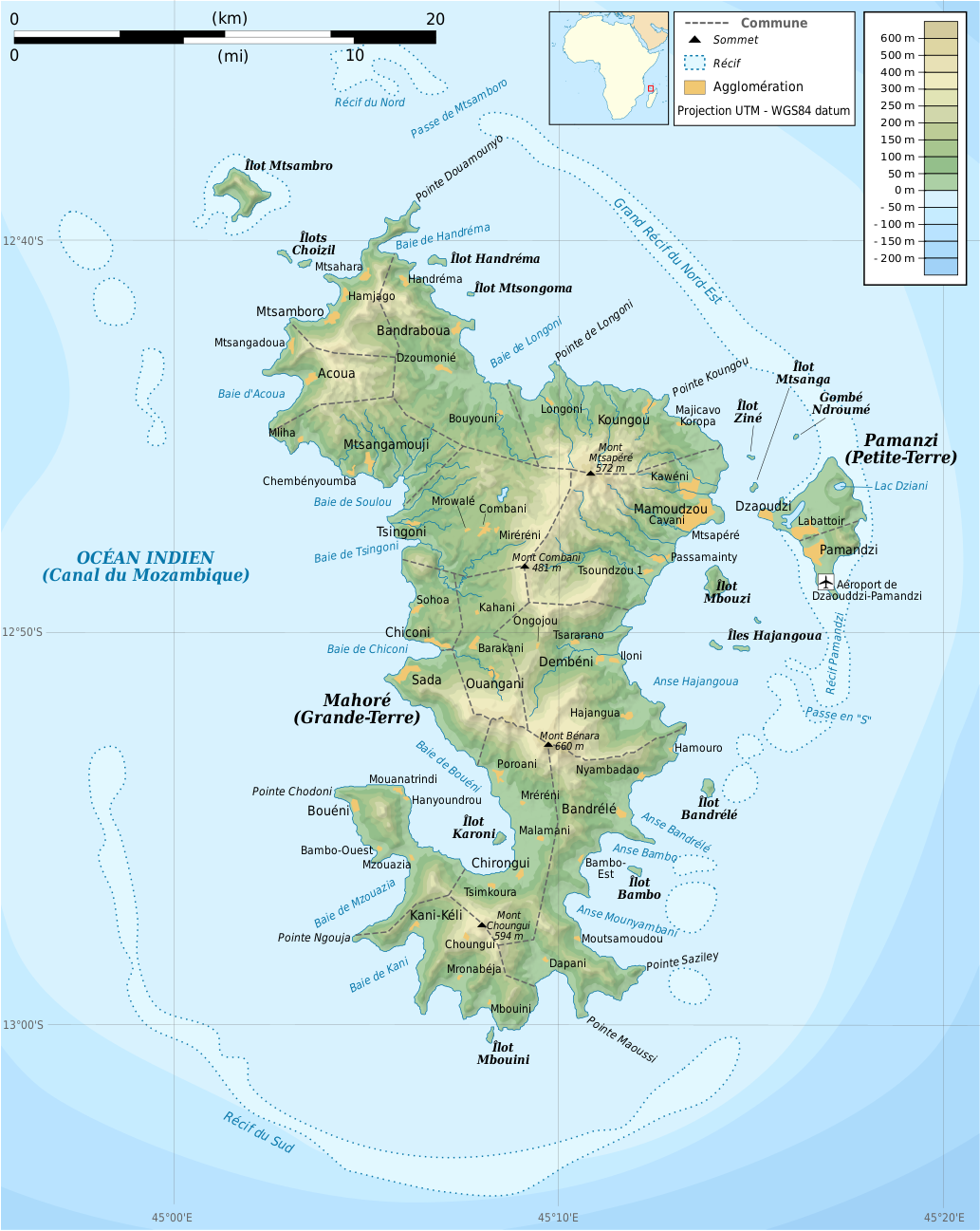 Posted by TW on May 15, 2018 in categories Seismic activity, Volcanoes

A rare earthquake swarm started near the small Indian Ocean island of Mayotte on May 10, 2018 and continues to date. Mayotte is the oldest volcanic island in the Comoros Basin grouping and quakes likely are the result of a seismic hot spot as well as the island’s position along the East African Rift.

According to the BRGM, the France-based geological agency serving the territory, the swarm started at 05:14 UTC on May 10 and increased around 12:00 UTC with magnitudes close to 3.0. Magnitudes increased to 3.5 and 3.7 by 16:40 UTC on the same day.

"Other earthquakes are likely to be felt by the population in the hours or days to come," BRGM said 13:00 UTC, May 14. "Magnitudes equivalent to those of Sunday and Monday morning earthquakes are still possible. These earthquakes do not produce damage and, although at sea, are too weak to generate tsunamis."

First analysis performed by the BRGM shows that all earthquakes are taking place in the same sector and there is no significant migration.

Earthquake swarm Mayotte May 2018"Earthquakes in this swarm are of the same order of magnitude as those of 1981 and December 1985," BRGM said. "They are are part of a known and moderate seismicity in the Mozambique Channel, as can be seen in the figure below:"

Moderate but poorly known seismicity in Mayotte
Seismicity in this region remains poorly known. A 2000 BRGM report notes that the seismicity is real as evidenced for example by the event of December 1, 1993 (epicentral intensity VII-VIII; Mb = 5.2 magnitude, depth 10 km), which fortunately occurred at sea about 40 km (25 miles) west of the main island. This earthquake is the strongest recorded in the Comoran archipelago for at least 60 years. Numerous huts in Mayotte were damaged, the agency said.

A seismic hazard study would make it possible to better understand the seismicity of the region and to estimate the return periods associated with events that could impact buildings.

Seismotectonic context
The seismotectonic zones with notable seismicity around Mayotte are: the East African Rift, the Davie Ridge, the Mozambique Basin, the Madagascar Block and the Comoros Archipelago.

The earthquakes of the Comoros probably have a double origin which translates:

their geodynamic position on an active hot spot;
their probable position at the front of the deformation of the East African rift.
The oceanic crust of the Comoros basin supports the four volcanic islands of Grande Comore, Mohéli, Anjouan and Mayotte. Mayotte is the oldest volcanic island.

Today, volcanic activity is restricted to the Karthala volcano at Grande Comore. The opening of the East African rift continues at sea using the fault system of the Davie Ridge and seems to progress towards the southeast, ie. towards the Comoros and Madagascar. It is likely that this phenomenon will bring back the old faults of these two sectors, and in particular the sub-meridian faults parallel to the East African Rift and the Davie Ridge.

Babs said:
This happened on 11/11. You may or may not remember me saying that I had a dream about a sign flashing 11/11 in front of me.

When I read this story earlier today, I got chill bumps.

Missed that one, did you post it in Melodi's earthquake and volcanoes thread by chance?

Abstract
Mayotte is a French Overseas Territory of the Comoros archipelago. Since the 1980, Mayotte has developed quickly: its population has multiplied by four in less than 30 years, infrastructure expanded rapidly in lowlands and slums developed in steep areas (through deforestation) or close to riverbeds. This development urgently required steps to ensure the safety of urban areas.

From 2002 to 2006, a major programme of natural hazards evaluation and zonation was conducted by the French Geological Survey in the 17 districts of Mayotte. The programme resulted in the publication of the first single-hazard zonation maps for Mayotte, at 1:25 000-scale in rural areas and at 1:10 000-scale in urban areas. Hazard maps regarding landslides and rock falls, stream floods, seismic lithological and topographical amplification potential, liquefaction potential and cyclonic marine submersion were produced for mayors and land planners. These atlases also included prevention guidelines to minimize risks associated with land-use or urbanization within hazard-prone areas.

This article presents the main achievements of the programme whose main problems were the absence of archives, of previous studies and the original volcanic geology of the island of Mayotte. The atlases highlight areas with numerous landslides, zones susceptible to flash floods, sectors likely to be submerged by storm surges and areas subject to seismic site effects due to thick volcanic weathered formations. This programme emphasizes the fundamental role in such tropical volcanic islands, of a good knowledge of the weathered formations, for the assessment of most natural hazards.

packyderms_wife said:
Missed that one, did you post it in Melodi's earthquake and volcanoes thread by chance?
Click to expand...

No it was the thread about November 11. Interesting times we're living in.
P

packyderms_wife said:
Isn't there a wave of dark matter making it's way through our solar system but scientists keep saying that we won't notice it?
Click to expand...

Would that be “matter of colour”?

Profit of Doom said:
Would that be “matter of colour”?
Click to expand...