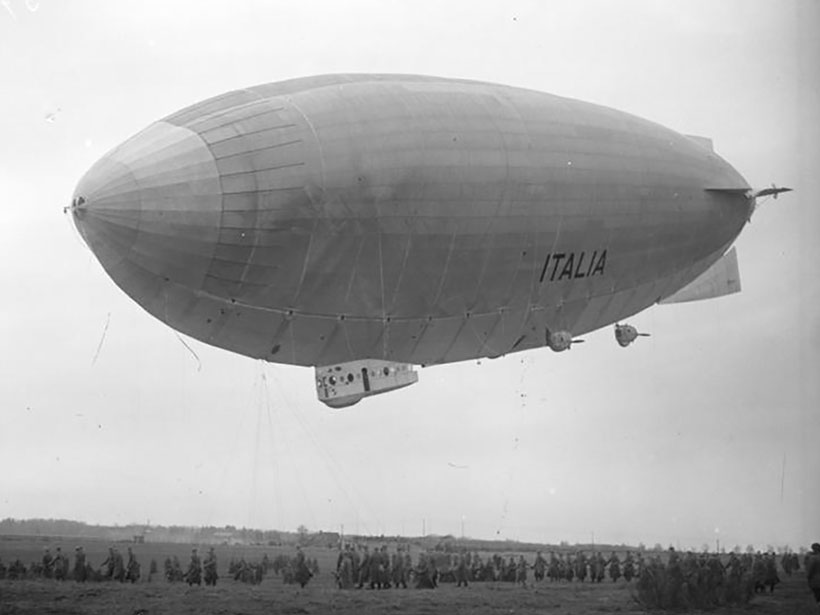 Analysis of a disrupted SOS signal during an early polar expedition showcases the importance of taking space weather into account when exploring new frontiers.

On 15 April 1928, the dirigible Italia lifted off from Milan, Italy, hoping to be the second airship ever to reach the North Pole. Over a month later, on 24 May, expedition leader Umberto Nobile sent a triumphant radio message to a ship anchored at the airship’s base camp near Ny-Ålesund, in the Norwegian archipelago of Svalbard: The mission was a success. It would be the last message the base camp would ever receive from the Italia.

Ten days later, a young Russian with a homemade radio picked up a desperate SOS signal originating 1,900 kilometers (1,180 miles) away. The Italia had crashed on sea ice north of Svalbard on its return journey, leaving nine surviving crew members who had been attempting desperately to contact the base ship to send help. The shipwrecked crew could pick up a news station from Rome, 4,000 kilometers (2,485 miles) away, but no matter what frequency they tried, their cries for help could not reach their camp on the other side of the Svalbard Islands. The stranded crew were eventually rescued after weeks on the ice.

“This was completely mysterious to them, I’m sure,” said Delores Knipp, former editor in chief of Space Weather and a research professor at the University of Colorado Boulder. “They could not understand how they could receive a signal from Rome—very distant—but not be able to contact what appeared to be a very close-by potential rescue ship.”

Unbeknownst to the Italia’s crew, their plight was caused by an unlucky confluence of space weather disturbances, according to a new retrospective analysis by a team of Italian researchers published this month in Space Weather. The crew had crash-landed in what is known as a radio skip zone, where radio signals can’t be received, during a period of turbulent solar and geomagnetic activity that prevented the signal from getting through.

“This is a history lesson that could replay during other explorations such as lunar or interplanetary travels, so possible communication issues due to disturbed space weather conditions must be taken in due consideration even more nowadays,” said Ljiljana Cander, a visiting scientist at the Rutherford Appleton Laboratory in the United Kingdom and a coauthor of the study.
A Different Kind of Storm

High-frequency radio communication takes advantage of a layer of the atmosphere ionized by solar radiation, which extends from 50 to 1,000 kilometers above Earth’s surface. Space weather is the term for the phenomena—often solar and electromagnetic disturbances—that affect this layer.


“Our midlatitude regions are pretty well behaved. We have to have really severe space weather storms to disrupt high-frequency radio communication,” Knipp said. But at the transition from midlatitude to polar regions, the ionosphere gets “turbulent.” It fluctuates more day to day and is more heavily affected by geomagnetic activity. This causes both longer-term radio disruptions and shorter-term blackouts.

Skip zones, or silent zones, are areas where the radio signal cannot reach the ground, meaning that a radio transmission can’t be received within the skip area. These silent zones occur near all radio transmitters, but their size is influenced by the electron density of the ionosphere, which fluctuates more at the poles. Polar latitudes also have unique ionosphere disturbances like polar cap absorption resulting from solar eruptions and auroral radio absorption caused by fluxes in energetic electron activity from the magnetosphere.
An Expedition on Thin Ice

As some of the first polar explorers, the crew of Italia became unwitting participants in the earliest-known demonstration of what happens when several of these absorption events conspire to disrupt a signal at the same time. When the airship crashed on the ice, the nine survivors immediately attempted to contact the base ship using a portable high-frequency radio. Signals fluctuated between the 9.1- and 9.4-megahertz frequencies, to no avail.

The dirigible had crash-landed in a silent zone for those particular frequencies, which extended across most of the Svalbard islands and made it impossible for the crew to contact their base. A geomagnetic storm flared up for several days after the crash, potentially further restricting the range of radio frequencies that could get through.

“The combination of the two—a lowering of usable frequencies and an increase of the absorption—might have caused either a narrowing of the usable frequency spectrum or even a blackout that lasted for a few days, preventing the survivors from being heard,” said Michael Pezzopane, a researcher at the Istituto Nazionale di Geofisica e Vulcanologia and a coauthor of the study.
To the North Pole and Beyond

“I do think these historical reconstructions are useful, especially from the point of view of generating awareness for space weather and how it can either adversely or positively affect what we do here on Earth,” said Nathaniel Frissell, an assistant professor in the Physics and Engineering Department at the University of Scranton in Pennsylvania who was not involved in the study.

“The people who were involved in this event were very much explorers and frontiers people,” Knipp said. “We can draw a parallel with that now for humanity as we try to go back and establish some kind of base on the Moon and as we reach out to cross to a new planet—Mars.”

I've always found it fascinating that communication between two points at a distance can be as clear as though they were sitting side by side, while nearer points are neigh impossible. I have a sneaking suspicion that one of the 'absorption events' that has not been accounted for in this story is it being a full on Mercury retrograde or shadow period preceding one.
It has all the classic hallmarks of such a time: may have to do a lil in home research project to see the frequency of such mechanical/communication failures during those time frames.
You must log in or register to reply here.
Share:
Facebook Twitter Reddit WhatsApp Email Link
Top