If this is decided to be woo, OK, so be it. Check back in 20 years after some more useless stick-in-the-mud modern "scientists" die off and new ideas take their place.

Warning, these are Navy SEALS involved in the interview, so expect soldier talk. Yes, it is a long interview. Paradigms do not shift quickly.

Randall Carlson discusses his latest scientific evidence which supports, if not proves, the Earth was struck by a series of comets just over 12,000 years ago. These impacts ended the last ice age suddenly and caused catastrophic flooding internationally (and especially in North America). His latest science, which actually starts to pinpoint the actual comet impact locations, shows how the flooding could have wiped out any previous civilization which existed here, and certainly wiped out half the megafauna of the globe almost instantaneously.

During the interview, we discuss what it may someday mean for humanity to understand the truth of our actual origin story over that of myth and cultural storytelling, which may be taking us off the path of knowledge more about rather than leading us to it.
M

Looks interesting. I will have to wait until I have that much time free all at once, so I can give it proper attention.

I'm always open to 'woo' stories; I've got one of those 'inquiring minds' want to know. Some day when some of it is proven true, I get to say to my friends; "I TOLD YA SO!" lol
D

TG, I don't see it as woo. It is a definite paradigm shift and one that has long been resisted by the gradualists (Earth Science: Gradualism and Catastrophism | Encyclopedia.com). Yet the mega scale physical evidence is there and obvious. I think Carlson has been on to something for years.

...but are the hippy liberal dope smokers thats my line in the sand, i guess. I've been shifting paradigms all my life, and eating sacred cows religiously, every Sunday, no problems.
D

If you want an authoritative source, See Paul LaViolette's Book "Earth Under Fire" 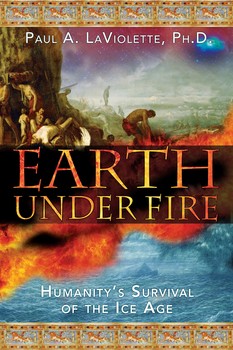 An investigation of the connection between ancient world catastrophe myths and modern scientific evidence of a galactic destruction cycle • Provides...

Many ancient myths from around the world tell of catastrophic destruction by fire and flood. These ubiquitous legends are so extreme that they are often dismissed as imaginative exaggerations. In Earth Under Fire, Paul LaViolette connects these "myths" to recent scientific findings in astronomy, geology, and archaeology to reconstruct the details of prehistoric global disasters and to explain how similar tragedies could recur in the near future.

Compelled by his decryption of an ancient warning hidden in zodiac constellation lore, LaViolette worked with information from many scientific sources, including astronomical observations, polar ice core measurements, and other geological data, to confirm that our Galaxy’s core exploded near the end of the last ice age. This explosion unleashed a barrage of cosmic rays and enveloped the solar system in a dense nebula, which led to periods of persistent darkness, frigid cold, severe solar storms, searing heat, and mountainous floods that plagued mankind for many generations. Linking his scientific findings to details preserved in the myths and monuments of ancient civilizations, he demonstrates how past civilizations accurately recorded the causes of these cataclysmic events, knowledge of which may be crucial for the human race to survive the next catastrophic superwave cycle. This information reveals the intelligence and ingenuity of our ancestors who, when faced with extinction, found the means to warn us that the apocalypse that destroyed them could occur once again.
You must log in or register to reply here.
Share:
Facebook Twitter Reddit WhatsApp Email Link
Top