NASA’s Mars helicopter has made history.
Ingenuity, a small, four-pound rotorcraft that was dropped off by the agency’s Perseverance rover earlier this year, became the first manmade object to achieve powered, controlled flight on the surface of another planet earlier this morning.
It’s a feat that could revolutionize the way we explore the surface of other planets, including Mars, in the medium-term future.
“You wouldn’t believe what I just saw,” Perseverance’s official Twitter account wrote, taking the tone of a proud parent. Images taken by the rover from several hundred feet away show the tiny helicopter zip up several feet into the air after spinning up its twin rotors.

The helicopter spun up its wings to 2,500 revolutions per minute — much faster than helicopter blades back on Earth — and flew to a height of around ten feet. It managed to hover there for roughly 30 seconds before making its descent.
The news comes after Ingenuity had to delay its flight by roughly a week to complete a software update.
During its historic first flight, Ingenuity — “the little rotorcraft that could,” as NASA’s Jet Propulsion Lab (JPL) dubbed it this morning — took the time to snap a picture of the dusty area below it. Its shadow can be seen imprinted below — more unmistakable proof that the helicopter actually did take flight.

The engineers at NASA’s Jet Propulsion Lab were ecstatic. Elated after years of hard work coming to fruition, Ingenuity project manager MiMi Aung could be seen ripping up contingency papers on camera.

I love this! Ingenuity Project Manager MiMi Aung rips up contingency papers after first successful #MarsHelicopter flight is confirmed.
Congratulations to the team for making history this morning by accomplishing something that has never been done before! pic.twitter.com/aELSKWAnra
— Thomas Zurbuchen (@Dr_ThomasZ) April 19, 2021
Click to expand...

“Ingenuity’s reporting that it has performed spin up, take off, climb, hover, descent, landing, touchdown, and spin down,” Håvard Grip, Ingenuity chief pilot at JPL, could be heard saying, followed by cheers and applause in the control room.
“Ingenuity has performed its first flight — the first flight of a powered aircraft on another planet!” he added.


“We’ve been talking for so long about our Wright brothers moment,” Aung said. “And here it is.”
“As an homage to the two innovative bicycle makers from Dayton, this first of many airfields on other worlds will now be known as Wright Brothers Field,” NASA associate administrator Thomas Zurbuchen wrote in a tweet commemorating the moment.
It’s a groundbreaking moment in off-world planet exploration.
“It’s important to have the aerial dimension in the context of human exploration of Mars, of which we’re dreaming [about], even now,” Zurbuchen said during NASA’s official stream.

More on Ingenuity: NASA Says Oops, Mars Helicopter Needs Software Update to Fly
As a Futurism reader, we invite you join the Singularity Global Community, our parent company’s forum to discuss futuristic science & technology with like-minded people from all over the world. It’s free to join, sign up now!

Posted for fair use 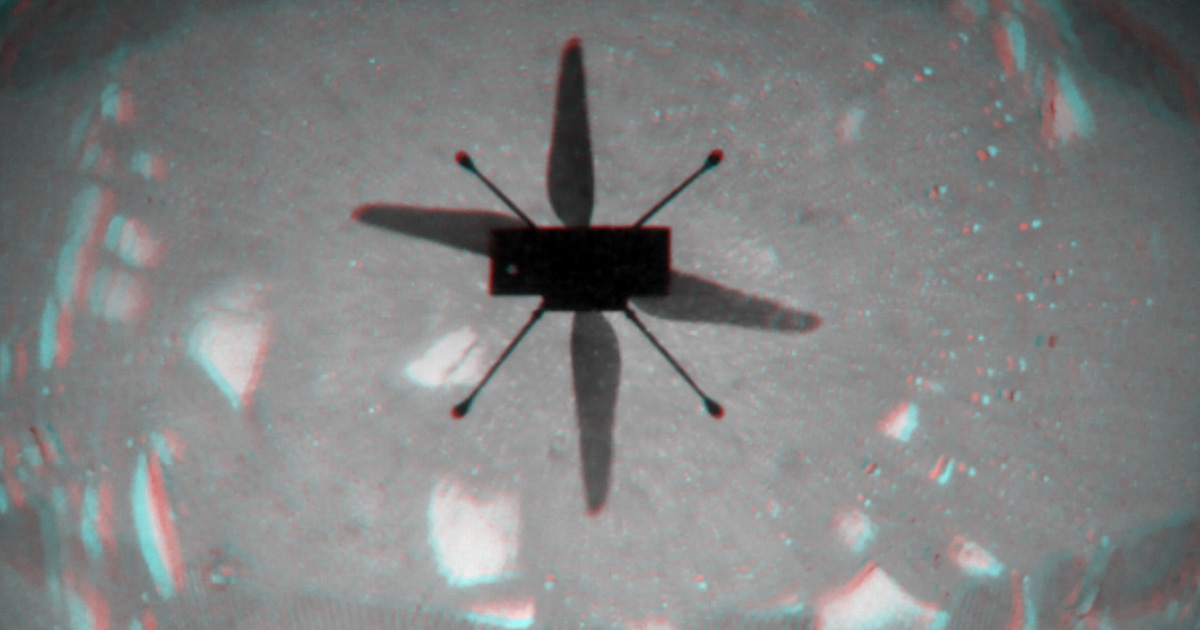 "Perseverance got us to Mars. With Ingenuity, we soar higher."


Data or it didn't happen. The #MarsHelicopter team is beginning to see data flowing back through the Deep Space Network. Stand by as they do live analysis of the first flight attempt on another planet.

I’ve taken several turns and made about 0.17 miles (270 meters) of wheel tracks from where I started to my current spot overlooking the #MarsHelicopter. Check in on my location any time with this interactive map: http://go.nasa.gov/where-is-perse

I’ve taken several turns and made about 0.17 miles (270 meters) of wheel tracks from where I started to my current spot overlooking the #MarsHelicopter. Check in on my location any time with this interactive map: http://go.nasa.gov/where-is-perse

All of this happened within about 200 ft of the landing site. Not much seen yet of Mars.

WFK said:
All of this happened within about 200 ft of the landing site. Not much seen yet of Mars.
Click to expand...

True, but it was a good, solid test flight.

If we can do this, just imagine what Ming The Merciless can do.

Dennis Olson said:
It’s not a helo. It’s a drone.
Click to expand...

If propelled by blades it does imply some amount of atmosphere.

The Helicopter received a message from Earth

vestige said:
If propelled by blades it does imply some amount of atmosphere.
Click to expand...

I don’t see what your statement has to do with mine.
V

Dennis Olson said:
I don’t see what your statement has to do with mine.
Click to expand...

I was attempting to tie them together and evidently failed. In essence, anything propelled by mechanical blades requires some atmosphere (fluid) to function. Nothing more.