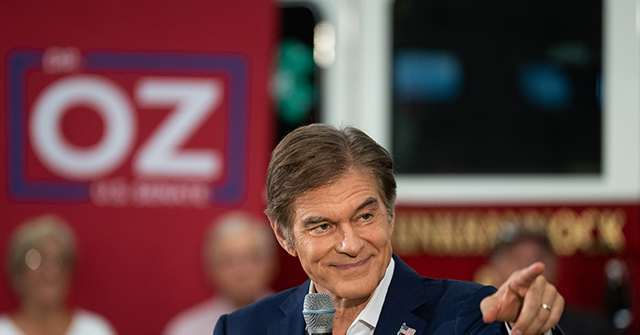 Dr. Oz has shown that he is, and will continue to be, a strong champion for law enforcement officers and their families in Pennsylvania. At a time when the law enforcement community is facing its greatest challenges, we need people who will advocate for the tools and resources that will keep the men and women of the Pennsylvania State Police safe as they serve our commonwealth. [Emphasis added]

“I am honored by this endorsement,” Oz said in a statement. “And in the U.S. Senate, I will continue to advocate for policies that meet these ends and build the relationships we need to forge ahead as one Pennsylvania with our common goals for peace, security, and justice for all.”

At a press conference on Tuesday, PFOP President John McNesby said Pennsylvanians “need, and this is very key, we need to have Dr. Oz in this position to support our law enforcement.”

“That’s the last thin line that the community has to be able to keep themselves safe,” McNesby said.

The endorsements come as Fetterman has come under intense fire for his pro-jailbreak agenda where he has called for releasing a third of Pennsylvania’s prison population, suggesting his top priority is ending mandatory life without parole sentences for convicted murderers, as well as helping to free a number of convicted killers across the state.

Even as Fetterman has bragged about his mayoral tenure in Braddock, Pennsylvania, he oversaw years of surges in crime. In most crime categories, in fact, crime dropped back down to its historic levels in the small town after Fetterman left office to become Lt. Governor.

John Binder is a reporter for Breitbart News. Email him at jbinder@breitbart.com. Follow him on Twitter here.
B

He got an nra endorsement too
M

will he get the Dominion indorsement

Murt said:
will he get the Dominion indorsement
Click to expand...

hmmmmmmmmmmmmm, the mail carriers might have yet a bigger sway. I've lost my faith completely.

Don't screw with an engineer

While I hope Oz wins, I really have trouble supporting anyone ever associated with that gasbag Oprah.
You must log in or register to reply here.
Share:
WhatsApp Email Share Link
Top