#BREAKING #Israel ramps up security in key sites amid fears that #Iran might retaliate with a counter cyber-attack, after the report in Washington Post that Israel crippled a port in Iran, in response to Tehran attack on its water sector. #CyberWar

This morning multiple sites affiliated to #Israel were targeted as part of a coordinated #CyberAttack by an #Iran|ian group called "Hackers_Of_Savior". No governmental websites were targeted in this cyber attack.

Grandsons of Nasser, affiliated to Nasser Salah Al-Din Brigades confirm the launching of three batches of IED Balloons from #Gaza into #Israel today. They have issued a warning that Israel has 72 hours to provide more medical supplies to Gaza for #COVID19.

After the alleged strike in Syria this evening, Israel closes the airspace in the Golan Heights for the next month.

Looks like to militant groups of #Gaza have been told by their factions to stop their activities. Wonder if this is due to the promise of $50 million from #Qatar. 
The IDF Spokesman today announced a rocket launch from the Gaza Strip into Israeli territory was identified.
As a result of the launch, a red alert was activated in the app and in open space only.
There were no injuries or damage.
The Eshkol Regional Council said, "About half an hour ago, a single rocket was detected in our area in the center of the Council. Apparently, it was a fall in an open area near the perimeter fence. No alarm was sounded in the communities because there was no danger of it falling inside the communities. We're in contact with the IDF and there's no change in the guidelines."
Yesterday, an incendiary balloon was found near Moshav Tidhar in the Bnei Shimon Regional Council. A resident who discovered the balloon called the police and a sapper neutralized the charge.
The past month-and-a-half has been relatively quiet on the Israeli-Gaza border.
The defense establishment warned that if sovereignty is implemented, there may be an escalation on this border. #Israel's Defense Minister Benny Gantz met with #IDF Chief of Staff, Head of the Shin Bet and Mossad Head and told them that Jerusalem will announce the beginning of the #annexation process over part of the #WestBank in the coming days

8 rocket tests by Hamas within couple hours. Rockets fired towards the sea. Meanwhile Palestinian media reports Israel has started a major arrest campaign in West Bank. Some indications Israel could be headed for surprise annexation after hinting delays. I'm still doubtful tho.
21 rockets. Pal media claims these rockets have a range of 250km

Reports in Gaza now claim that the Hamas navy force has closed the fishing zone entirely, with no reason given.

Considering the distance and specifically in southern Gaza based on the current reports, this may have been an interception of another weapons smuggling from Sinai

The Israeli military is preparing for a massive military operation against Hezbollah should the Lebanese proxy of Iran try to attack anytime soon. This is the most comprehensive deployment of intelligence and combat units since the 2006 Lebanon war.


According to Channel 13, the IDF in Northern Command have raised their alert status and have sent additonal Iron Dome batteries to the North.

In response to an attempted IED attack near the security fence between Syria & Israel last night, we just struck SAF targets in Syria including:

The #IDF continue to move additional hardware to the northern border as tensions remain high with #Hezbollah. Aerial activity is constant over the region with little or no breaks for the last 200 hours. #Israel #Lebanon.

The #IDF alert on the northern border may change in the coming days due to an assessment that #Hezbollah is less likely to carry out their retaliation following the explosion in Beirut yesterday.

At this time the #IDF continues to remain on high alert. 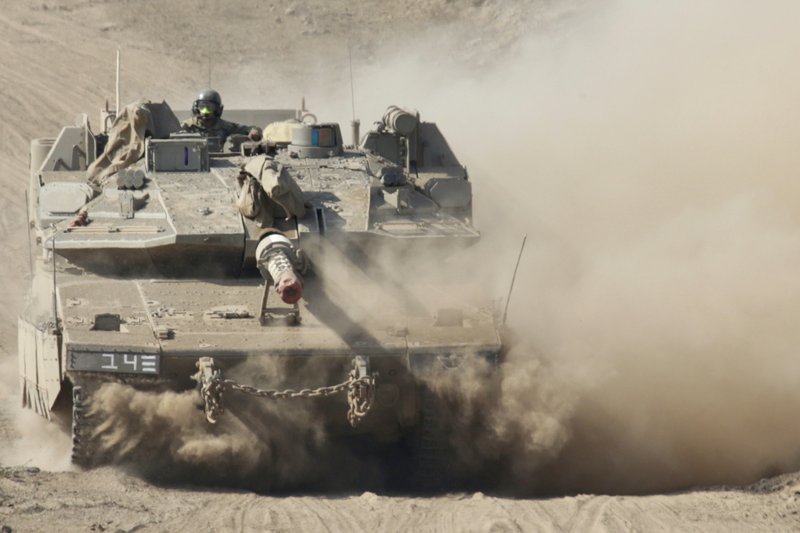 1 of 5
An Israeli soldier drives a tank during an exercise in the Israeli controlled Golan Heights near the border with Syria, Tuesday, Aug. 4, 2020. (AP Photo/Ariel Schalit)

JERUSALEM (AP) — Israeli Prime Minister Benjamin Netanyahu on Tuesday warned the Lebanese militant Hezbollah group and others after Israeli forces said they thwarted an infiltration attempt from Syria by suspected militants.
The Israeli military announced late Monday that it had struck targets in Syria after the militants tried to plant explosives in the Israeli-controlled Golan Heights. Israel struck the four suspects, who were believed to have been killed.
Netanyahu, who toured a military base on Tuesday, said Israel would not hesitate to take further action.
“We hit a cell and now we hit the dispatchers. We will do what is necessary in order to defend ourselves. I suggest to all of them, including Hezbollah, to consider this,” he said.

The incidents come amid heightened tension on Israel’s northern frontier following a recent Israeli airstrike that killed a Hezbollah fighter in Syria and anticipation that the militant Lebanese group would retaliate.
Following the airstrike, the Israeli-controlled Golan Heights was hit by explosives fired from Syria and Israel responded by attacking Syrian military positions and beefing up its forces in the area.
Last week, Israel also said it thwarted an infiltration attempt from Lebanon by Hezbollah militants, setting off one of the heaviest exchanges of fire along the volatile Israel-Lebanon frontier since a 2006 war between the bitter enemies.
Israel considers Hezbollah to be its most immediate threat. Since battling Israel to a stalemate during a monthlong war in 2006, Hezbollah has gained more battlefield experience fighting alongside the Syrian government in that country’s bloody civil war. 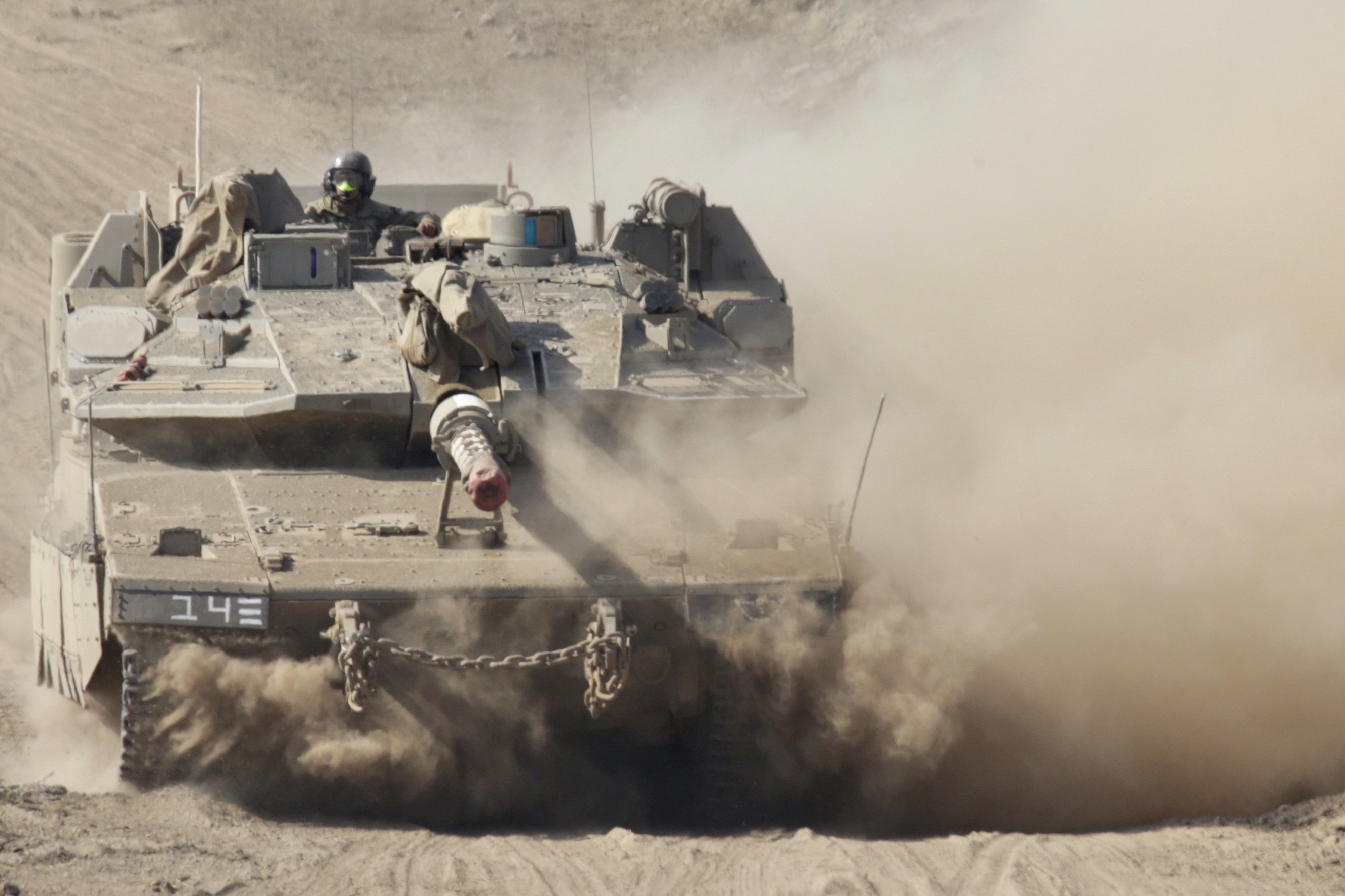 "A warning was activated in the Western Galilee region. Details in review"

In the last hour multiple Red Alert Sirens sounded in northern #Israel, this was a false arm due to suspicion of a drone infiltration. #IDF/#IAF aerial activity continues to be on alert in the area and is extremely active.

Israel shut down last night a drone from Lebanon that entered the Israeli airspace above Mt. Hermon.

#Hamas launches missiles toward the sea 'in warning to #Israel'

#BREAKING #Israel says it has foiled a big cyber-attack by a foreign state against its security industries
Click to expand...

According to Channel 12 in Israel, North Korea attempted a cyber attack on computers associated to Israel's military and security industries.

NEWSALERT: GAZA CITY, Gaza Strip (
@AP
) _ Hamas spokesman accuses the UAE of 'stabbing' Palestinians in the back after deal with Trump and ties with Israel.

#Israel has conducted Airstrikes in #Gaza after Gaza factions have launched incendiary balloons into Southern Israel. It's likely if the increasing tensions don't calm down we will likely see rocket launches by Gaza factions followed by Israeli strikes on Gaza militant sites

In response to a series of explosive balloons launched from Gaza into Israel over the last week, we just struck a Hamas aerial defense post, underground infrastructure, & observation posts in Gaza. Hamas will bear the consequences for terror activity against Israeli civilians.

ongoing IDF strike in #Gaza wider than in previous nights; more artillery fire and missiles reported; 3 injured in total so far according to locals; earlier today IDF chief Kochavi hinted that #Israel will respond with more force to arson balloons

Images: Attendees at a Kataib Hezbollah protest rally in Iraq burn a pile of U.S. flags while demonstrating against the normalization of relations between Israel and the UAE.

#Israel has conducted Retaliatory Airstrikes for the rocket launches into Israeli Territory. The #IDF has hit multiple militant sites in #Gaza.

#IDF says jets and attack helicopters have struck additional #Hamas targets in #Gaza following the rocket fire and continued launching of incendiary balloons throughout the day, including a military compound belonging to one of the group’s special units
-----------------------------------
Iron Dome incoming siren activated in Ashkelon and Zikim. IDF checking reports
Last edited: Aug 18, 2020

Lebanese source: one dead and a number of wounded in an armed conflict between Amal and Hezbolla

..kids have been feisty again as of late..

Replying to
@manniefabian
Joint Operations Room of Gaza factions in a statement say that they will protect the fishermen from Israel robbing them of their livelihoods . Israel closed the Gaza fishing zone on 16/8 in response to the explosive balloon attacks.
You must log in or register to reply here.
Share:
Facebook Twitter Reddit WhatsApp Email Link
Top