Journalists Complain That They Can't Handle Four More Years of Trump
P.J. Gladnick is a freelance writer and creator of the DUmmie FUnnies blog.

Journalists have just given voters a terrific reason to re-elect Trump...to watch their hilarious angst. Jeremy Barr in Saturday's Hollywood Reporter has chronicled the whining by the press at the prospect of being forced to cover four more years of Donald Trump in the Oval Office.

It is obvious, though they lamely try to hide it to no avail, that most of the Washington press corps suffers from extreme Trump Derangement Syndrome and the idea of continuing to cover Trump for another term has sent them into complete despair. So for many voters, casting their ballots for Trump would be an act of very pleasurable schadenfreude knowing how it would send so many members of the press into a deep, deep depression.

Barr reveals just how tortuous another four years of Trump could be for much of the press in "Four More 'Exhausting' Years? Trump Reporters Mull Covering a Second Term."

"I don't know anybody who wants to do another four years of this news cycle," a senior CNN producer says. The first year of the Trump presidency was a year of calibration for the nation's top journalists, who learned to keep up with a politician who revels in exhausting the press corps, launching news cycles with early-morning, late night and weekend tweets.

The next two years, 2018 and 2019, were even more exhausting, as journalists scrambled to cover government shutdowns, congressional hearings, a Supreme Court nomination, the president's flirtation with North Korea, the Mueller Report and impeachment.
Click to expand...

And who's fault was that? Wasn't it the mainstream media that for two solid years was constantly hyping the Trump-Russia collusion conspiracy theory until the Mueller Report revealed it to be nothing but fake news?

A senior CNN producer tells The Hollywood Reporter that the network's journalists are not rooting against the president in November but guessed they would welcome a return to a more "normal" presidency and accompanying news cycle.
Click to expand...

"Not rooting against the president?" Apparently what we have here is a CNN producer who does not even watch his own network's broadcasts.

"As journalists, I don't think anybody cares about what party the president of the United States is," the producer says. "What they care about is being able to live their lives normally again. I think there's mental exhaustion around this presidency, and I don't know anybody who is enjoying it. I don't know anybody who wants to do another four years of this news cycle."

The producer continues: "It's not a matter what his political beliefs or his ideological beliefs are. The exhaustion comes from his behaviors. That's it. His behavior is exhausting. ... I don't I think have ever run into anybody who says they literally hate Donald Trump the man. They're just exhausted by his behavior, and I think that's fair. Nobody I know is openly rooting for him to lose."
Click to expand...

Notice how the press only becomes "exhausted" when a president doesn't follow the liberal playbook? The reality is that it most definitely matters to the liberal media "what his political beliefs or his ideological beliefs are." As to having never run into anybody who says they literally hate Donald Trump, perhaps this CNN producer's ears are as in bad shape as his eyes that can't see anybody on his network slamming Trump.

Maggie Haberman, the chief White House correspondent for The New York Times and the journalist who has most embodied the Trump presidency, expressed doubt about her ability to cover another Trump term — logistically — in a previously unpublished interview with THR in late February, before the coronavirus was officially declared a pandemic.
Click to expand...

So voters should deny Trump a second term in order to prevent poor Maggie from suffering a mental meltdown?
R

Just from the shear benevolent regard I have for the Lame Stream Media, I will lend them their choice of an authentic Japanese katana or a loaded handgun so that they can escape from the reality that contains both them and The Donald.

I will even provide rice paper or hollow point ammo as required!

Millwright said:
There is a Jump for Trump meme somewhere.
Click to expand...

God grant this man another term!

At least they haven't been

is it possibly because they areexhausted after making up so much crap and have run out of ideas they cant go on any more? could we be so lucky?
T

Ya, i'm sure they are worn out from all the times Pres Trump handed them their asses. The cool thing is they keep coming back for more. Slow learners i guess.
Mike

I've never been more committed to a candidate than I am to TRUMP.... he gets my vote no matter what.

They just can't take what they dish out.
M

The large number of reporters are being worn down by ONE MAN.
There has never been a tougher, more tenacious President than Donald Trump!!
Suck it up, buttercups!!!!!!!!

I guess their brains (or ganglia as the case may be) are being over taxed from all the lies they are having to think up.

Journalists Complain That They Can't Handle Four More Years of Trump
(Translation) Only a fraction of the country believes what we report now because President Trump and his supporters have tweeted the truth and made montage videos exposing our miss-characterizations with the truth. (whiny petulant snivel) Nobody believes us anymore. (Whine off)

Tripod said:
Ya, i'm sure they are worn out from all the times Pres Trump handed them their asses. The cool thing is they keep coming back for more. Slow learners i guess.
Mike
Click to expand...

I prefer the term “developmentally disabled.”

This too shall pass.

That’s offensive to all the people who really are developmentally disabled, and are still better people than these shills for evil.

They have been exposed and they aren’t journalist. How about puppets of the globalist left.

Three plus years of engaging in 'the resistance' takes its toll on people. May they all seek professional medical help and retire to a nice safe rubber room.
F

Then how 'bout you all just go get a REAL job, m'kay cupcake?

frazbo said:
Then how 'bout you all just go get a REAL job, m'kay cupcake?
Click to expand...

Because they have no skillz...not even English composition.

Maybe they would feel more at home in a nice commie country, like Venezuela, or Cuba? Don’t let the door hit ya where the good Lord split ya!

These people drive me batty, hubby too. We'll gladly take 4 more years of Trump. We have our Trump 2020 flag out already and even a great big bumper sticker on our old RV. She's a driveway queen (we have this RV but never use it. Someday when the kid are gone? Who knows.) but we make sure the rear end is pointed out to the street and everyone can see our sticker. He's going to win in a landslide I swear. How can anyone even think of voting for the left now.

TXYellowBird said:
These people drive me batty, hubby too. We'll gladly take 4 more years of Trump. We have our Trump 2020 flag out already and even a great big bumper sticker on our old RV. She's a driveway queen (we have this RV but never use it. Someday when the kid are gone? Who knows.) but we make sure the rear end is pointed out to the street and everyone can see our sticker. He's going to win in a landslide I swear. How can anyone even think of voting for the left now.
Click to expand...

Thank you so much!

Maybe they should learn to code.
C

They aren't journalists, they are opinion makers. They don't report facts, only opinions. They really are fake news.
D

They are propagandists.
R

CNN for one should check their ratings because we can't take four more years of them and I don't understand why MSNBC isn't in the basement with them. Rigged ratings?

Good Lord, they've joined the ranks of the skyscreamers.

May it be His will.

Millwright said:
There is a Jump for Trump meme somewhere.
Click to expand...

Though not a jump for Trump, I already posted a meme on the Cartoon thread!!! 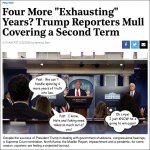 I can't say I understand how they feel as I have NEVER flip flopped on one issue let alone like them EVERY ISSUE. For instance many a woman newscaster made their name digging dirt on Trump and his womanizing, (yeah locker room talk) or allegations from porn stars screaming no man is above the law and every woman HAS TO BE HEARD AND HER LLEGATIONS INVESTIGATED. They beat that horse into the ground first with Trump and then Kavanaugh. Now here's handsy Uncle Joe and they have to attack the women again. How are they supposed to keep up with what they are supposedly for or against?

Every time they think they have Trump he says they're FAKE news and his personal poll numbers climb higher. What are they supposed to do? Every champion they put up Trump at first acts stupid or lackadaisical and then out of the blue Trump destroys their champion. What are they supposed to do? Their ratings are dropping, internet news shows are breaking news stories making them look bad, and their own best and brightest Madow, Williams, Lauer, and Rather have fallen sullying the name of news cater.

With the latest news about Obama being involved in Russia gate, Ginsberg can't continue to be superhuman and survive forever, and Hillary being made to testify in court like a commoner. What is happening? All their champions are falling both in politics and the trade, the veneer is cracking what are they supposed to do?

I think they should all go to jail for biased and agenda driven reporting violating the public trust and destroying the fourth branch of government that of a free and honest media to report the news.

Come on, these 'reporters' work hard spinning their webs of deceit .... they need a vacation ... somewhere tropical .... lets send them all to gitmo for a well deserved rest in solitude.

That should properly say “I Can't Handle Four More Years of Trump”
To which I would respond, “Sounds like a personal problem.”

I wonder why these mere news readers, when not “on script” think they have the mandate and authority to speak for anyone beyond themself personally.

Well bless their hearts. About the only other thing they are qualified for requires them to ask, "Do you want fries with that?"
T

Karens? I see that a lot, idk what it means.
ETA: I looked it up.

Well suck it up buttercups......we had to put up with Obongo for eight years, so just deal with it.
You must log in or register to reply here.
Share:
WhatsApp Email Link
Top