CORP/BIZ GameStop Is Rage Against the Financial Machine

And away we go!! I'm back in the green! for a moment anyways.

I'm in the green because I averaged down from my first purchase, lol.

Closed at $181, aftermarket closed at 178.51, and I have learned so much being on reddit reading all the daily discussions about how this crap is supposed to work vs how they actually run it lol!

Twisted said:
Closed at $181, aftermarket closed at 178.51, and I have learned so much being on reddit reading all the daily discussions about how this crap is supposed to work vs how they actually run it lol!
Click to expand...

This retired broker is live twice a trading day and focuses on GME, AMC, and the other "meme"{ stocks.

If you are new to the markets and want to know what is going on, Bruce will help you figure it out. Learn how the stock market works in plain english with Stock Markets With Bruce. What makes stocks and markets go up and down, plus some company shares on the move.

I watched part of that video (thanks for the link), and I have to wonder where he got the "20-x short attacks" on GME today. Not arguing that there weren't/aren't any short attacks on the stock (those hedge funds ain't giving up easily), but how does he get his number?

A lot of times I see stock movements that were predictable in terms of Elliott Wave analysis, yet the stock movements are blamed (or credited) to some external thing, like earnings calls, or new product releases, or world events. Not saying that those things can't or don't affect stock prices, clearly they can and do, but a lot of times it seems to me that a particular stock movement up or down was something that was already baked in and predictable.

(For those who don't know, Elliott Wave theory basically says that stock prices are subject to mass psychology, and that stock prices goes up and down in waves in response to investor sentiment. Where the waves start and end, and how many waves in any one direction, are somewhat predictable, at least in the sense that you can project a near-term high or low price window. When unexpected things happen the stock price has a "correction" (up or down), but even the corrections, after that first wave, are some what predictable (there is an A-B-C pattern).)

All that said, its unclear if/how Elliott Wave theory applies to GME and other meme stocks. I've been trying to figure that out myself, but some Redditors on WSB seem to be in agreement that technical analysis is out the window in this particular situation. It wouldn't surprise me if GME goes back down to 115-ish or less (even down to the 80s or 90s); it also wouldn't surprise me if it goes to the 229-314 range. If I had to bet (well, holding any GME stock right now is in itself a bet), I'd say that it goes to the mid-to-high 200s before it comes crashing down below 100. But "I am not a broker and this is not financial advice" and all that.

BY TYLER DURDEN
SATURDAY, APR 17, 2021 - 03:54 PM
You won't find Roaring Kitty Capital, LP in any Goldman Sachs salestrader's rolodex but to the millions of WallStreetBets daytrading fanatics, the name Roaring Kitty is far more popular than Bridgewater, Citadel, or Millennium.

And for good reason: Keith Gill, the person behind the moniker "Roaring Kitty" and "Deep****ingValue", who launched a historic short squeeze across multiple asset classes in January, destroying Melvin Capital (which needed a bailout from both Ken Griffin and Steve Cohen) and several other heavily bearish hedge funds, showed ordinary investors that virtually anyone can become a millionaire with lots of hard work and preparation... before eventually ending up in Congress explaining to Maxine Waters just how a relative nobody managed to outsmart people who run billions thanks to his now iconic investment in Gamestop.

Another reason why "Roaring Kitty" has earned the respect of his peers is that unlike so many traders who make a buck on a trade and move on, Gill has demonstrated true diamond hands, and not only that but he is now literally doubling down on the company that brought him stardom and riches by exercising his call options and buying even more shares.

"Deep****ingValue" posted a screenshot of his portfolio showing that he has exercised 500 GameStop call options expiring Friday at a strike price of $12, giving him 50,000 more shares of a stock that closed at $154.69 on Friday, but will likely blast off on Monday once the Reddit animal spirits are reignited.

There's more: in addition to exercising his options, Gill also bought another 50,000 shares of the video-game retailer, doubling his holdings to 200,000 shares from 100,000 at the beginning of the month. His total investment in GameStop is now worth more than $30 million, giving him a profit of nearly $20 million. Bloomberg reached out to Gill’s mother, Elaine Gill at his childhood home in Massachusetts, who confirmed the Reddit screenshots were posted by her son.

Despite having earned the praise and admiration of most of his peers for executing what many have said has been the most astute short squeeze since Volkswagen, there were haters too and roughly around the time Gill was explaining to Maxine Waters how investing works, he was hit with a lawsuit that accused him of misrepresenting himself as an amateur investor. The suit alleged that he was actually a licensed securities professional who manipulated the market for profit, which he denied.

To be sure, it wasn't just Gill: some argue that the true mastermind behind the Gamestop squeeze was not Roaring Kitty at all but hedge fund Senvest which started buying GME shares all the way back in September - roughly around the time the post "The REAL Greatest Short Burn of the Century" appeared on Reddit and which made over $700 million on its GME position which has given it the top position in the HSBC hedge fund ranking for the third month in a row 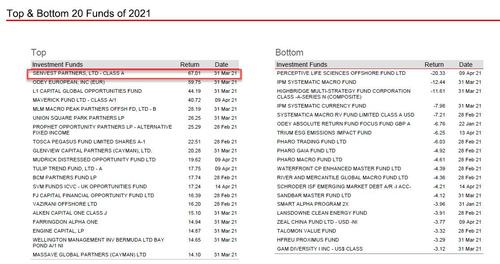 Meanwhile, on Friday GameStop CEO George Sherman who is expected to leave, sold almost $12 million in shares. The company is looking for a new CEO as part of a shake-up spurred by activist investor and Chewy.com co-founder Ryan Cohen, Bloomberg notes.

While shares of GameStop are up 721% YTD, though they are less than half of the peak level in January. However, now that Roaring Kitty has shown his Reddit peers that he is not only in it for the long run but doubling down, expect another squeeze on Monday as the latest generation of shorts which have entered the stock in recent weeks, is steamrolled, and as Reddit excitement in GME which had fizzled in recent weeks... 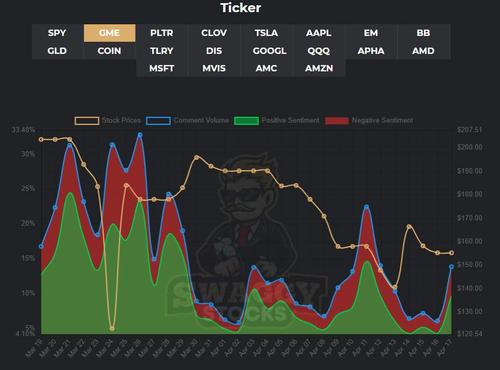 ... explodes afresh.
And speaking of Chewy, we remind readers that the reason why the stock rose as high as the mid-$400s in February is not only the presence of Chewy founder Ryan Cohen, but that as the September Reddit write up noted, "if GME was trading at the same P/S multiple as $CHWY, the share price would be $420."
In short, GME may be about to double all over again.
D

Animal Spirits are fun .... unless they are eating your guts while you yet live.

Still holding my few shares... I hope it DOES go up, although I am still "profitable" (above my average cost per share).
You must log in or register to reply here.
Share:
WhatsApp Email Link
Top