Status
Not open for further replies.

The US Federal Communications Commission has blacklisted Chinese tech firms Huawei and ZTE and their subsidiaries as “national security threats,” barring US firms from using government funds to do business with them.

BREAKING NEWS: The @FCC has designated #Huawei and #ZTE as companies posing a national security threat to the United States. As a result, telecom companies cannot use money from our $8.3B Universal Service Fund on equipment or services produced or provided by these suppliers. 1/5 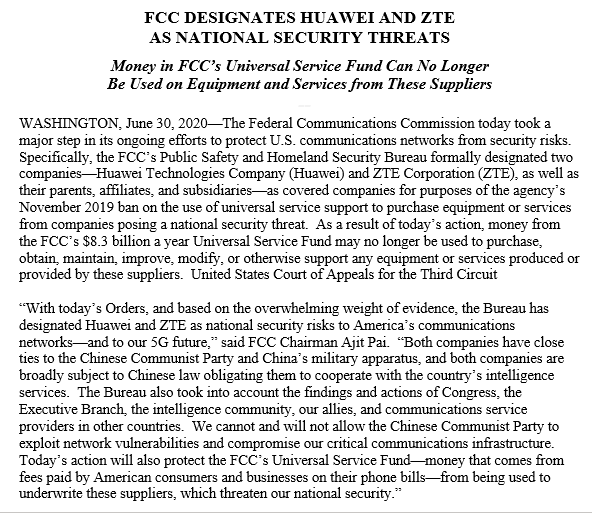 The US Federal Communications Commission has blacklisted Chinese tech firms Huawei and ZTE and their subsidiaries as “national security threats,” barring US firms from using government funds to do business with them.

US designates China's Huawei and ZTE as national security threats


The orders designating the two companies as national security threats are available in-full for both Huawei and ZTE.

Multiple reasons led to this decision

According to FCC's orders, Huawei and ZTE are considered highly susceptible to influence and coercion by the Chinese government, military, and intelligence community.


The decision was also based on security vulnerabilities and risks known to affect both ZTE and Huawei equipment, with the directors of all six top U.S. intelligence agencies (DNI, CIA, NSA, DIA, FBI, and NGA) urging against purchasing services and equipment from Huawei and ZTE in February 2018.


"[W]e are deeply concerned about the risks of allowing any company or entity that is beholden to foreign governments that don’t share our values to gain positions of power inside our telecommunications networks that provides the capacity to exert pressure or control over our telecommunications infrastructure," FBI Director Christopher Wray said at the time.


This is considered a huge step toward protecting the U.S. communications networks from security risks and it comes after the U.S. government agency banned the use of universal service support for purchasing services and equipment from companies deemed to be national security threats in November 2019.


"As a result of today’s action, money from the FCC’s $8.3 billion a year Universal Service Fund may no longer be used to purchase, obtain, maintain, improve, modify, or otherwise support any equipment or services produced or provided by these suppliers."

"With today’s Orders, and based on the overwhelming weight of evidence, the Bureau has designated Huawei and ZTE as national security risks to America’s communications networks—and to our 5G future," FCC Chairman Ajit Pai said.


"Both companies have close ties to the Chinese Communist Party and China’s military apparatus, and both companies are broadly subject to Chinese law obligating them to cooperate with the country’s intelligence services.


"We cannot and will not allow the Chinese Communist Party to exploit network vulnerabilities and compromise our critical communications infrastructure."


According to today's FCC's presser, the designations of ZTE and Huawei as national security threats are effective immediately.

Not the first Chinese telecom deemed a security threat

In February 2020, Huawei and two of its U.S. subsidiaries were also charged by the U.S. Department of Justice with conspiracy to violate the Racketeer Influenced and Corrupt Organizations Act (RICO) and to steal trade secrets.


In September 2019, U.S. Senators Charles Schumer and Tom Cotton urged the FCC to review the approvals of China Telecom and China Unicom that gave them the right to operate in the U.S.


Last but not least, in April 2020, several U.S. Executive Branch agencies asked the FCC to block China Telecom America's authorization to operate within the U.S. over notable cybersecurity risks.

Status
Not open for further replies.