BRKG FBI Director Wray: "The level of collaboration between the private sector and the government, especially the FBI, has made significant strides."


FBI Director Christopher Wray: "The level of collaboration between the private sector and the government, especially the FBI, has made significant strides." 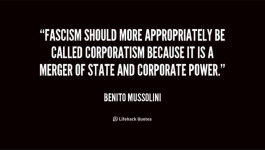 That's literally the definition of fascism. Wray can burn in hell.


When the FBI Director flies to a foreign country to brag at a globalist conference that he’s got the US government and the private sector monitoring & censoring everyone in clear violation of the Constitution - that’s when you know America’s government has become a tyranny.

You call it collaboration.
I call it Treason!
H

The next Congressional Commitee hearing Wray is in front of should be real interesting.....
B

Why is the Director of the FBI at Davos in the first place? What's he have to do with the WEF????!

He's part of the Totalitarian DNC/DS

Wray was a Trump appointment.

EMICT said:
Wray was a Trump appointment.
Click to expand...

Trump’s entire presidency was sabotaged by Dems, FBI, DOJ, and GOP elites like McConnell. He had to start up an organization from scratch to run the country. Many of his selections were per recommendations of GOP elites who wanted him to fail. I.e. Wray, Priebus, Barr, Tillerson,

You left out pompeo

The fact that this is so public is downright scary!

Echo 5 said:
That's literally the definition of fascism. Wray can burn in hell.
Click to expand...

quite actually its the DUTY of the current crop of CONgress critters to make certain he does EXACTLY THAT. we'll see how well THAT happens. filthy dirty POS that he is

Trump's hiree has spoken, and because of that how many American's have turned in their guns?

Pretty sure that Wray was next in line in the progressive line....

Don't forget that at almost every single public speech 45 had just before he left office, Pence was there, also spoke, and brought up the glories of "Public/Private Partnerships".

My mom was on to that fascism YEARS ago, they've been at it a long while.

United Nations NGO's (so called non-governmental organizations) are part and parcel of PPP, created to destroy our nation. UN has a partial list of over a thousand NGO's, Chamber of Commerce being one, mainstream churches, women's and children's 'rescue', etc. Very worth your time to dig through the lists.

NGO's must apply to the UN for membership, swear to abide by UN rules, mandates and orders, and I think they also pay to be on the list. In short, they ARE the UN, wolves in sheep's clothing.