Lurker said:
And we're asked to 'back the blue'. Sure. Uh huh.
Click to expand...

I think the biggest barrier we face - is the cops.

That is why more and more I am leaning towards becoming anti cops.

If they take a side it is always the rioter's side.

Every time I read another of these threads I am convinced that the cops at the very least are cowards if not IMO traitors.
B

[QUOTE="Jonas Parker, post: 8
.....
Despite what taxpayer-funded Marxists say on college campuses, all of the institutional and systemic oppression in this country is against white conservatives. Diversity and multiculturalism mean the death of the rule of law with low IQ savagery reigning supreme.
[/QUOTE]

All4liberty said:
No one said do nothing. Be smart. Take away the supporters first, media, elected constitution criminals, major investors. If the Jews would have done that, there would be very little the stormtroopers would have been able do to them.

Once one side starts sniper fire into crowds, it will spiral out of control. Let's see where we sit after the elections.
Click to expand...

If that’d work, I’d be all for it. Where IS George Soros right now for example? You think you can get to him? How about the CEOs of Twitter, FaceBorg and Google? Think you’ll get to them? How about the chief editor of the NYT? No, it won’t work. Those people are way too heavily shielded. You can only get to the footsoldiers. But take out enough, and they run out. At that point they become impotent. They can issue orders but not have them carried out.
Last edited: Oct 18, 2020

INVAR said:
...your own relatives will sell you out for the promise of bread.
Click to expand...

It should be a priority to get some food socked away right now.

You might be feeding your neighbors (possible allies).
N

Our world will be like this if Harris wins. Plus they will do a full court press on disarming us. Then it's 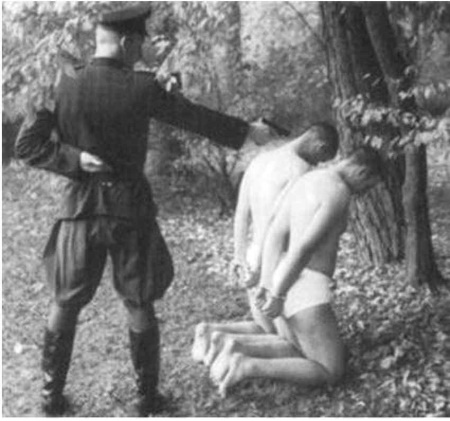 When they come for you, take as many as you can before they get you.

They want you dead.

-OR- Hope and pray that Trump wins.
G 
Cops Stand Down as ANTIFA Terrorists Attack Trump Supporters at Rally in Ithaca, NY
This is what rule by mob looks like.
Published 2 hours ago on Oct 17, 2020 By Shane Trejo

Police stood down and allowed ANTIFA terrorists to attack a group of peaceful Trump supporters in Ithaca, N.Y. on Friday afternoon.

“We gathered to have our Trump 2020 Rally, and at 4 PM were immediately met by a large group of counter protestors. After about a half hour went by and the counter protestors saw that they had a large numerical advantage, they began crossing the street,” organizer Rocco Lucente wrote in a Facebook post.

“At that point they began pushing, shoving, kicking, punching, stealing peoples signs and flags, taking peoples hats, and attempting to physically intimidate the crowd into surrender. It got to the point where the mob was attacking anyone who still had Trump gear on. We called Ithaca Police Department to let them know what was happening, but they didn’t show up for a half hour and merely directed traffic away from the riot once they did show up. Mayor Svante Myrick enabled this thuggish display of violence by mobs of his voters by telling IPD to stand down,” he added.

Lucente noted that a 60-year-old woman was accosted by the mob and suffered a dislocated shoulder due to the ANTIFA terror. He is urging Trump supporters to show up with overwhelming numbers for a follow-up protest next weekend to show the mob that patriots will not be deterred by their thuggery.
“I will be posting more on this in the future, but this post has ONE message: The only way to respond to this is to show up a week from today in MASSIVE numbers,” he wrote.

“If the mob learns that they can intimidate us into silence, it’s over. At that point, we no longer have freedom of expression in the place where we live. The ONLY way to show them that this doesn’t work is to show them that this will cause us to show up in LARGER NUMBERS THAN EVER!” Lucente added.
Tompkins County Republicans also noted that the ANTIFA terrorism that is being celebrated by nascent left-wing organizations such as the Democrat Socialists of America (DSA).

The Cornell Daily Sun covered the event and correctly noted that the ANTIFA terrorists instigated the violent situation.

“We had no idea we’d be joined by people calling us members of the KKK,” organizer Nancy Sullivan said. “We’re not here to create trouble.”

Cornell history professor Russell Rickford endorsed the terrorist display publicly, showing how institutional power works to punish conservatives and endorses violence against them.
“I think it’s really important in a town like Ithaca, with its liberal veneer, to actually demonstrate strong opposition to racist and reactionary politics,” said Rickford, who is a member of the Ithaca DSA. “Quite often, liberalism is willing to accommodate the far right, to justify it and, by doing so, legitimize it.”
Even though Trump supporters have been hunted by ANTIFA terrorists nationwide, the China-owned feds continue to look the other way, as Big League Politics has noted:


So attorney general Bill Barr says he has absolute solid proof via the FBI of Antifa’s organized financing and structure yet FBI director Christopher Wray insists that ANTIFA, which is a dangerous terrorist group, is just an ideology and not dangerous at all,” Stone said in a video address against Wray posted on his Telegram account.

Despite what taxpayer-funded Marxists say on college campuses, all of the institutional and systemic oppression in this country is against white conservatives. Diversity and multiculturalism mean the death of the rule of law with low IQ savagery reigning supreme.
Click to expand...

THE PRESIDENT TRUMP SHOULD SEND THE COPS PACKING, WITHOUT PAY, AND THEY ARE NOT TO BE HIRED AGAIN?
V

Dennis Olson said:
Time for a few heavily armed conservatives to open up.
Click to expand...

That time was in 2016 when the commies were assaulting the red hats. When a threat appears and is not challenged, the threat becomes legitimized and therefore the authority. Since people surrendered to the threats of violence by the communists, the communists are the legitimate authority and not the Constitution, nor the rule of law.
You must log in or register to reply here.
Share:
WhatsApp Email Link
Top