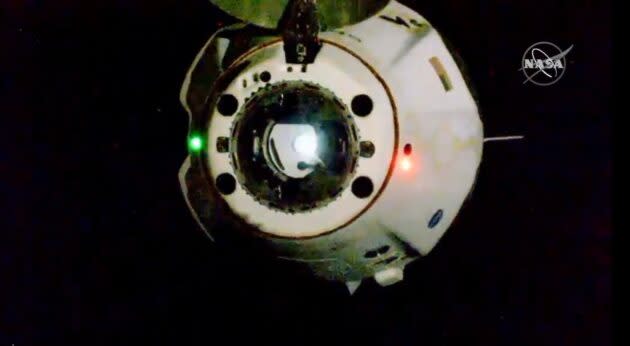 A camera on the exterior of the International Space Station shows SpaceX’s Crew Dragon capsule backing away to begin the homeward journey for NASA astronauts Doug Hurley and Bob Behnken. (NASA via YouTube)

Fortunately, SpaceX’s Dragon capsule is heading for waters off Florida’s other coast.
Dragon Endeavour undocked from the station at 7:35 p.m. ET (4:35 p.m. PT), on track for a splashdown in the Gulf of Mexico near Pensacola, Fla., at 2:41 p.m. ET (11:41 a.m. PT) Sunday. The alternate landing site is closer to Panama City, Fla.

Both sites should be far away from Isaias’ expected track along the United States’ Atlantic seaboard, and the timetable could be adjusted if the weather forecast changes. NASA and SpaceX had made plans for seven potential splashdown targets, but due to Isaias’ strength, NASA concentrated on the westernmost sites.

Live coverage of the Dragon’s return is due to continue through splashdown.

Video showed the Dragon smoothly backing away from the station, more than 400 miles over South Africa. “Dragon departing,” NASA astronaut Chris Cassidy declared as he rang a nautical-style bell aboard the station.

“It’s been a great two months, and we appreciate all you’ve done as a crew to help us prove out Dragon on its maiden flight,” Hurley told Cassidy, the station’s commander, via a radio link.

Just as the Dragon’s launch made history in May, its return will go down in space history books as well. It’ll mark the first return of a commercially built and operated U.S. spacecraft from orbit, and the first at-sea return of U.S. astronauts since the topsy-turvy splashdown of NASA’s Apollo-Soyuz crew in 1975.

During a news conference conducted in advance of the undocking, Hurley said he had reviewed the Apollo record and acknowledged that splashdowns can be “pretty challenging from a physiological standpoint.”

“Folks didn’t feel well — that’s the way it is with a water landing,” he said. Flight surgeons will be on board the recovery fleet to help the astronauts adjust.

The game plan calls for the Dragon to be hoisted aboard the main recovery ship with a crane, and then for Behnken and Hurley to be extracted from the capsule for the return to shore.

During their 63 days on the space station, Behnken and Hurley beefed up the station’s crew complement, which had been down to three before they arrived..Behnken participated in four spacewalks with Cassidy to upgrade the orbital outpost’s power system.

Cassidy noted that he had been the sole American, working alongside two Russians. “It was lonely conversations I had with myself at dinner prior to their arrival — and with these last two months, it’s been fantastic to have buddies at the chow table to reflect on the day, think about tomorrow and talk about world events,” Cassidy said.

"This flag has spent some time up here, on the order of 9 years… I'm very proud to return this flag home and see what's next for it on its journey to the Moon." – @Astro_Doug with the U.S. flag that will return home with the #LaunchAmerica crew & fly on the 1st #Artemis mission pic.twitter.com/aHYoE82c1N
— NASA (@NASA) August 1, 2020
Click to expand...

Behnken and Hurley aren’t the only space travelers returning to Earth. Tremor, a plush dinosaur that was used as a zero-G indicator for the Dragon’s launch, is coming back as well.

The Dragon is also bringing back a U.S. flag that flew aboard NASA’s first and last space shuttle mission, and had been kept on the space station since the shuttle fleet’s retirement in 2011 for the next crew to arrive on a U.S.-built spacecraft.

“The flag’s all yours,” Cassidy told Hurley during a farewell ceremony.

In an extra historical twist, Hurley was part of the crew who dropped the flag nine years earlier. “I’m very proud to return this flag home, and see what’s next for it on its journey to the moon,” he said, referring to NASA’s Artemis moon program.

The next SpaceX Crew Dragon launch to the space station is scheduled for as early as next month. And Behnken’s wife, NASA astronaut Megan McArthur, is due to be part of a Dragon crew heading for the station next spring.

I watched it undock.