Well, it's always SOMEBODY, isn't it?

Fair use cited so on and so forth.

As recently as May 2020 - amid silence from Powell after his 'save the world' moves in March - the Fed Funds futures market started to price in the possibility of negative rates by November 2000.

This echoed summer of 2016 when traders started to bet on the possibility of negative rates by 2017 as post-Brexit chaos sparked a slew of bets that The Fed would pause its rate-hike cycle and revert back to cuts.

Now, one day after Jay Powell vociferously pushed the anti-inflation-fighting stance of The Fed - promising to hike rates higher and hold them longer than the market expected... no matter what - something interesting just happened in the rates options market.

As Bloomberg's Ed Bolingbroke reports, traders in the SOFR options markets have started to position for The Fed to shift to the zero lower bound by the middle of 2024. 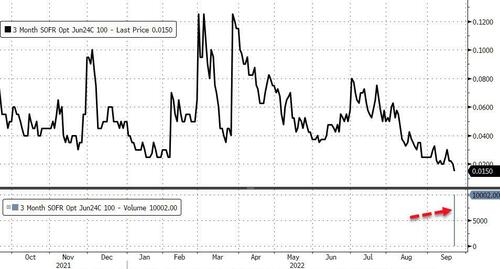 Some traders have described these positions as the cheapest 'recession hedges' around.

However, for The Fed to go from its projected rate level of around 4.625% - or even more conservatively, from the current level of 3.25% - to ZIRP, we would imagine a little more of a catastrophic event than a 'recession' (that would be a drop on the scale of the 2008 Lehman crisis response).
S

Hey can send one lend me 5 for lunch?

Hey can send one lend me 5 for lunch?
Click to expand...

If that was your test for a job at the Fed, I'd say you passed with flying colors.
N

define crisis and explain how that is different from today

Hey can send one lend me 5 for lunch?
Click to expand...

Where you finding lunch for $5 ?
D

Too late. Depending on the situation, many are already in a financial crisis.

I laugh at all the great big brains on wall street who have been telling us boob’s in
fly over country great wall street wisdom like ‘don’t fight the fed!’

Now the fed has been telling us FOR months they are raising rates, they will raise higher and longer, and this will cause pain in the economy and the great brains on wall street are shocked they are actually doing what they said.

Maybe wall street will Stop Fighting the Fed. The free money and ridiculous interest rates and financing for zombie corporations is so 2021. This new reality will likely mean that as bad as 2022 is, economically, 2023 imho WILL BE WORSE. It takes est 6 months for interest rate hikes to actually impact the economy. That means rate hikes between now and March 2023 will be ‘hitting’ the economy continuously from now through Q3 2023.

I do think the next hike will be 50 not 75 because I think its right before the midterms and dems and the media would likely physically attack the fed if they put another 75 right before their already disasterous midterms.

On the not personal investing advice we will possibly see an oversold rally as early as next week that may provide some exit points or short positions before the next wave down.

Remember even with the economy sliding into a ‘its not a recession, recession,’ the market is not the economy and will at times go up.

When the next 401k statements people will be shocked at how much less they have in retirement. Also many people who have pensions are likely un aware that their pension checks may be backed and the ability to receive future payments Are possibly impacted by the market sell-off.

The wealth of working people everywhere has been stolen by the WEF billionaire class aided by the democrats all getting their cut. And I really believe it gets worse from here.
You must log in or register to reply here.
Share:
WhatsApp Email Share Link
Top