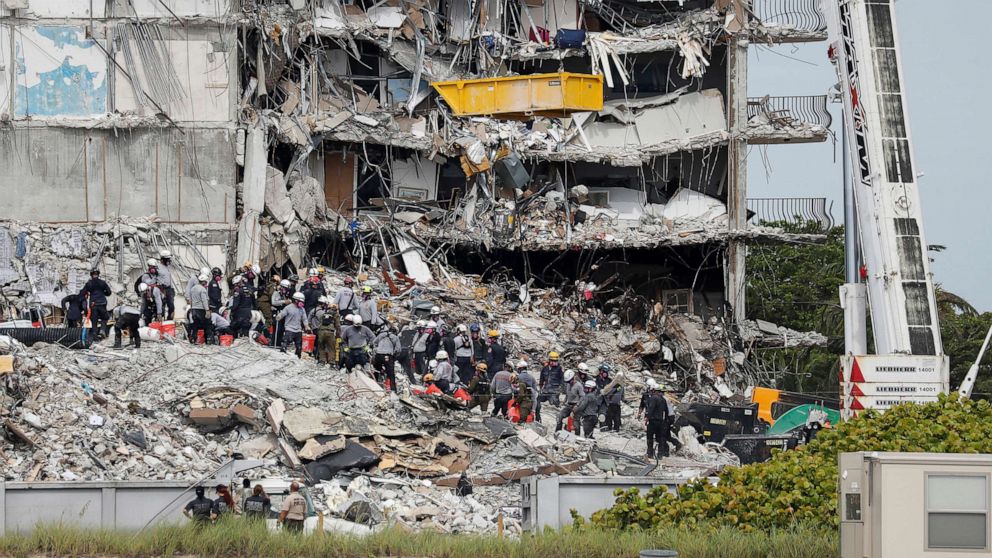 Nearly 100 people were killed when the building collapsed last June.

Nearly 100 people were killed when the building collapsed last June.

A nearly $1 billion settlement in last year's shocking collapse of a Miami Beach-area condo building was unexpectedly announced during a routine status conference in a Florida courtroom Wednesday afternoon.

Lawyers involved in the class-action lawsuit representing tenants from the oceanfront building in Surfside announced a $997 million settlement had been reached.

Upon the news, Miami-Dade Circuit Judge Michael Hanzman said he was "speechless."

"I'm shocked by this result -- I think it's fantastic," the judge told the courtroom. "This is a recovery that is far in excess of what I had anticipated."

Litigation stemming from the catastrophic collapse in June 2021, which killed 98 people, had been moving slowly as the first anniversary approached.

The 12-story residential building partially collapsed around 1:15 a.m. on June 24 at the Champlain Towers South condominium in the beachside town of Surfside, about 6 miles north of Miami Beach. Approximately 55 of the oceanfront complex's 136 units were destroyed, authorities said.

MORE: What we know about the victims of the Surfside building collapse

The final victim's remains were identified more than a month later, on July 26, following a massive search and rescue mission that become a recovery operation.

The victims killed ranged from young children to elderly couples, and included families, longtime Surfside residents and tourists staying in the building.

"Some of the victims can never recover from this loss and we know that," Hanzman said in court.

The settlement will cover families of those who died as well as survivors, according to lawyers on the case.

The judge said he wants the whole settlement finalized by the one-year anniversary on June 24, with payouts made by the fall. Motions for preliminary approval will be due no longer than a week from Wednesday.

"My goal was to do everything humanly possible to conclude this case by the first anniversary of the collapse," he said.

All funds for the victims will go through the receivership.

"Today is one of those days in a career that I think we’re going to look back on," attorney Michael Goldberg, the court-appointed receiver who will oversee the payouts, said in court.

One of the lead attorneys in the case, Judd Rosen, told ABC News that the settlement "represents accountability from a lot of different players."

"It's the largest settlement from a single incident in U.S. history," Rosen said. "The number itself implies significant accountability on what happened."

Plaintiffs in the class-action lawsuit argued that the poor construction and maintenance of Champlain Towers South turned catastrophic with the development of a new luxury tower next door.

"CTS [Champlain Towers South] was an older building in need of routine repairs and maintenance, but it was not until excavation and construction began on the luxury high-rise condominium project next door, known as 'Eighty-Seven Park,' that CTS became so badly damaged and destabilized as to be unsafe," the lawsuit stated. "First, the developers of Eighty-Seven Park improperly obtained the right to build higher and larger than originally entitled, including by buying a public street just a few feet from CTS's foundation. Then they undertook destructive excavation and site work dangerously close to CTS, sloped their project so that water poured into CTS and corroded its structural supports, and drove sheet piles 40 feet into the ground, causing tremors and vibrations at such high levels that they cracked tiles and walls at CTS and shook the structure."

Owners and insurers of Eighty-Seven Park had consistently denied any responsibility for the collapse.

Defendants named in the lawsuit included the Champlain Towers South Condominium Association and developers involved in the Eighty-Seven Park project.

MORE: Neighboring construction could have impacted Surfside building's stability, experts say
The Champlain Condominium Towers South was built in 1981. It was in the process of a county-mandated inspection for commercial and residential buildings 40 years after they're constructed when the building came crashing down.

In the wake of the collapse, Miami-Dade County inspected more than 500 buildings that were approaching the 40-year recertification deadline to identify any obvious structural concerns

Wow. Thanks for posting.

Thanks from me, too. I was wondering about this just a few days ago.

How much actually goes to those hurt? And how much goes to the lawyers?
But, yes, speedy, and hopefully enough.

So each individual gets a free Starbucks coupon and the rest goes to the lawyers?

We just got back from vacationing in the area. Drove down A1A to check out the entire region. Saw where this building had been. Very sad situation. They are if course already redeveloping the parcel. I’m not sure what exactly caused the collapse but regulators had better find out because there are tons of companies who would love to build many more skyscrapers in this area as older, much shorter buildings get sold to be torn down and the parcel redeveloped.
S

Thanks, I didn't know there were limits.

I've been doubtful of Class Actions before because every time I've been a part of one the compensation I've always gotten has been so little I wondered why I bothered.

I was part of a class action law suit and I received $15 the lawyers made millions.

Jez said:
So each individual gets a free Starbucks coupon and the rest goes to the lawyers?
Click to expand...

It depends on the laws in Florida as to the amount that the attorney's will receive. The amount can go down as the settlement increases.

Bad Hand said:
I was part of a class action law suit and I received $15 the lawyers made millions.
Click to expand...

Thats how most class action law suits go best to go at it by your self.

But while everyone is reveling in their new found wealth . . .

Why did the building collapse in the first place?

Red Baron said:
Why did the building collapse in the first place?
Click to expand...

Ocean environment is the harshest condition for any structure.

Most people don't understand how pervasive it is until they have lived it.

But while everyone is reveling in their new found wealth . . .

Why did the building collapse in the first place?
Click to expand...

Red Baron said:
Why did the building collapse in the first place?
Click to expand...