NEW — Hezbollah to hit Israel if US retaliates, sources to Tasnim news agency

Brett Bair (not a fan of Trump's) reported the 2 bases they hit in Iraq, were bases where we HARDLY HAVE ANY MILITARY there AND .....THESE BASES WERE HARD TO HIT - Iran went out of their way to hit the lowest populated bases.

Second wave of missiles from Iran were on their way about 20 minutes ago when I was watching the news. (Don't ya wish ya didn't "Unplug" just for times like these?)

I'm holding all judgments in reserve right now except to say......

On the #Gaza border today there has been 4 arrested for infiltration into #Israel throughout the day. In the morning there was a Red Alert which was triggered by machine gun fire and this evening there are reports of a failed rocket launch.

Due to the stormy weather causing flash floods across #Israel several #IDF bases have been flooded, potentially causing damage to #IAF jets. 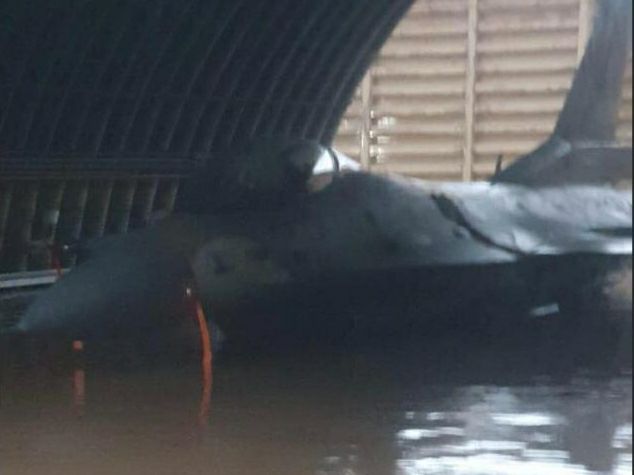 Huh, #Iran|ian Supreme Leader Khamenei will be leading Friday prayers for the first time since 2012 tomorrow...

Militant groups in #Gaza linked to military factions are getting twitchy, all of a sudden 4 rockets during day time out of nowhere (somewhat rare) and now IED balloons being launched. #Hamas affiliated Son of Zawari have announced “they are active”

There was rumours a week ago about tension between factions and #Egypt due to Ismail Haniyeh being in #Iran. Could be completely unrelated but something has sparked this off.

Qeshm Fars Air EP-FAA affiliated to the #IRGC has just appeared on @flightradar24 at circa 31000ft over #Iraq. She has probably come from #Syria, usually you see her on the move after deaths among IRGC in other countries. Possibly connected to last nights airstrikes. #Iran

Explosion in the west part of #Gaza City.

Strikes in response to rocket fire and IED balloons.

#Iran president #Rouhani warns US & Europe that soldiers will not be safe in #MidEast anymore & should withdraw. @PR24_pl

al-Akbhar newspaper: Gaza factions have decided to escalate in the south due to Israeli delays in implementing projects and understandings. It is also reported that Hamas and Egypt are in a heated fight after terror factions flew to Iran for Solomeini's funeral.

Al Ahbar newspaper: “The #Gaza factions are escalating the situation on the border because #Israel is not implementing the ceasefire agreements . Other sources said thoug that the real reason is the growing tensions between PIJ, Hamas and Egypt following Solemanis extermination”

Al Ahbar also reports about a “silent rift” between different wings of the Gaza factions , which also pushes the whole region for an escalation that will “zero” the whole frictions and make the sides focus on fighting instead of internal disputes
#Israel #Gaza

#Iran's president Hassan Rouhani has reportedly said there are now no limits on the country's nuclear program....I’m trying to find a source on this, anyone?

Update: the wording of the first tweet was questioned for good reason, the wording really should be something like this;

Media in Gaza reporting large batches of IED balloons have been launched towards Israel.

In response to the IED balloons earlier today launched from #Gaza into #Israel the #IDF have targeted a site in northern #Gaza via helicopter 5 times.

#IDF confirm the targeting of a #Hamas underground infrastrucutre in response to the IED balloons throughout the day. #Gaza #Israel

Another batch of IED balloons launched from the Gaza Strip

Replying to
@no_itsmyturn
Night units are back by the way

Trump said he will announce/release his Peace Plan before his upcoming meeting with both Netanyahu and Gants at the White House. (plan to be released between now and Tuesday Jan 28)

Sorry, I did as good as I could on getting these to post. 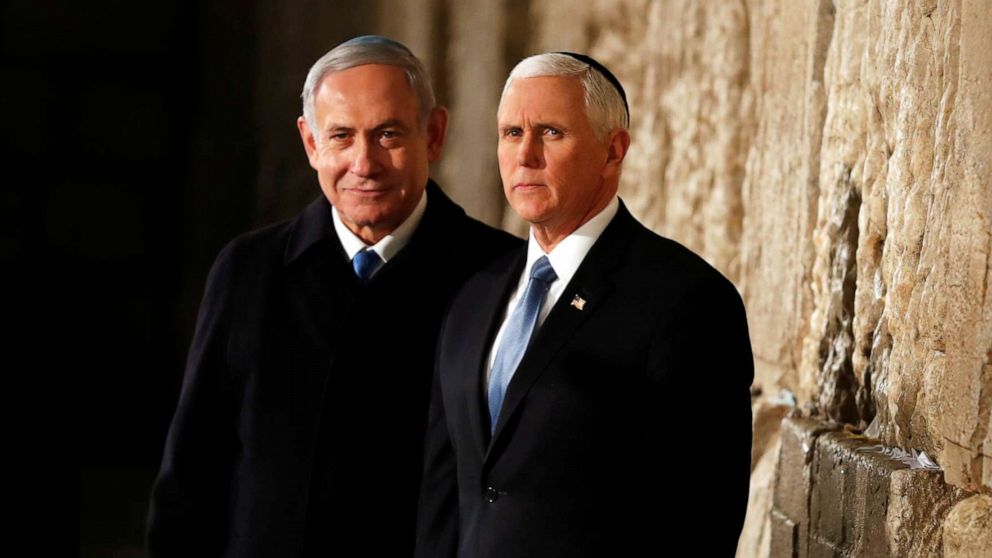 The visit seemed time to provide a distraction from the Senate impeachment trial. Notably absent from the announcements was any mention of the Palestinians.

Notably absent from the announcements was any mention of the Palestinians.
By
Ben Gittleson
January 23, 2020, 5:04 PM
7 min read

Copy and paste to embed this video

Vice President Mike Pence said he extended the invitation to Netanyahu and Gantz -- the leader of Israel's Blue and White party -- during his trip to Jerusalem, on behalf of Trump.
MORE: Trump flouts chummy relations with Netanyahu ahead of Israeli election
The timing of the visit could provide a distraction from the ongoing impeachment trial in the Senate. 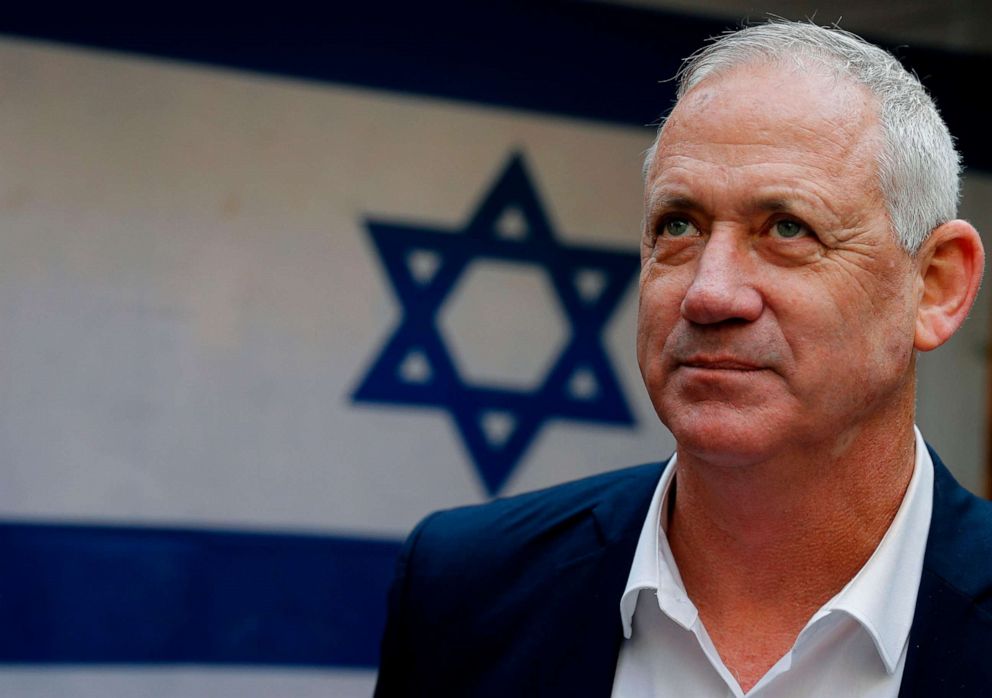 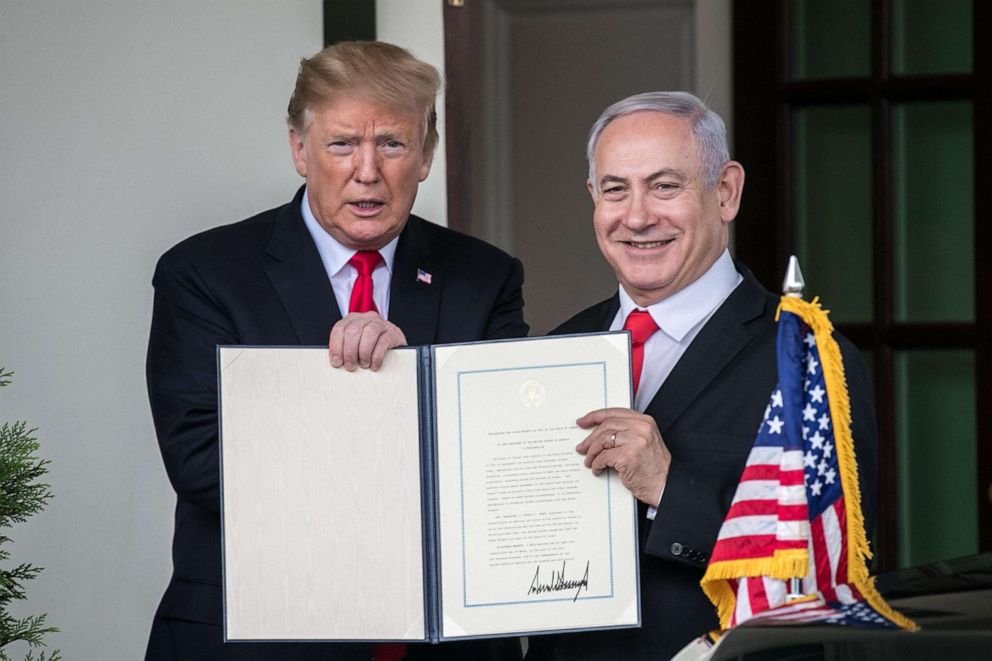 Netanyahu, who has adopted Trump's language and messaging tactics in a bid to align himself with the American president -- widely popular in Israel -- was charged in November with fraud, bribery and breach of trust.
He is currently seeking immunity from prosecution even as he campaigns to hold his office.[/QUOTE]


'It's a great plan': Trump to release Middle East peace proposal before meeting with Israeli leaders


WASHINGTON – President Donald Trump said Thursday that he will release his long-delayed Middle East peace plan before a surprise meeting next week with Israeli Prime Minister Benjamin Netanyahu and his chief political rival, Benjamin Gantz.
“It’s a great plan. It’s a plan that really would work,” Trump told reporters on Air Force One as he traveled to Florida. He said the White House will release the secretive deal "a little bit prior" to the meeting with Netanyahu and Gantz in Washington.
That unusual session, set for Tuesday, comes as Israel lurches toward a third election on March 2, which will pit Netanyahu's conservative Likud party against Gantz's more centrist Blue and White party. Israeli voters have twice failed to give either faction a clear majority, leading to an unprecedented third showdown.
Vice President Mike Pence first confirmed next week's visit during a trip to Jerusalem on Thursday. Pence made it clear they were not initially planning to invite Gantz, the former head of Israel's military.

"President Trump asked me to extend an invitation to Prime Minister Netanyahu to come to the White House next week to discuss regional issues, as well as the prospect of peace here in the Holy Land," Pence said.
"At the prime minister’s suggestion, I also extended an invitation to Benny Gantz, the leader of the Blue and White Party, and he has accepted the invitation," the vice president said.

Trump expressed surprise that they both agreed to come to Washington so soon before the election. “We have both candidates coming – unheard of,” he said.
Netanyahu has made his close relationship with the American president a centerpiece of his campaign, and Trump has made it clear he favors Netanyahu. Although Trump hasn't officially endorsed Netanyahu, he has made a series of policy pronouncements that seemed timed to boost the Israeli incumbent ahead of the two previous elections.

Trump tasked his son-in-law and adviser Jared Kushner to craft the peace plan early in his presidency. Trump has touted the proposal as the “Deal of the Century.” But its rollout has been repeatedly delayed and its fate is bleak.

If the White House does release the proposal next week, it may be viewed as yet another effort to help Netanyahu as he vies to hold onto power in Israel. Netanyahu faces charges of fraud and bribery.

“We’ve spoken to them briefly," Trump said of Palestinian leaders. "They have a lot of incentive to do it. I’m sure they maybe will react negatively at first, but it’s actually very positive for them.”

The plan is unlikely to break the decades-long stalemate between the Israelis and the Palestinians. The White House has alienated the Palestinians with a series of provocative actions, including moving the U.S. embassy to Jerusalem and cutting U.S. aid to Palestinian refugees.

In the wake of those steps, Palestinian leader Mahmoud Abbas has refused to engage with the Trump administration, saying the White House is not a neutral broker.

“I’d love to be able to do that deal," Trump said Thursday. "They say that’s the hardest of all deals.”

Lilbitsnana said:
Trump said he will announce/release his Peace Plan before his upcoming meeting with both Netanyahu and Gants at the White House. (plan to be released between now and Tuesday Jan 28)

Sorry, I did as good as I could on getting these to post.

The visit seemed time to provide a distraction from the Senate impeachment trial. Notably absent from the announcements was any mention of the Palestinians.

Netanyahu, who has adopted Trump's language and messaging tactics in a bid to align himself with the American president -- widely popular in Israel -- was charged in November with fraud, bribery and breach of trust.
He is currently seeking immunity from prosecution even as he campaigns to hold his office.
https://twitter.com/i/web/status/1220428541197799424
View: https://twitter.com/realDonaldTrump/status/1220428541197799424?ref_src=twsrc^tfw
Click to expand...

'It's a great plan': Trump to release Middle East peace proposal before meeting with Israeli leaders 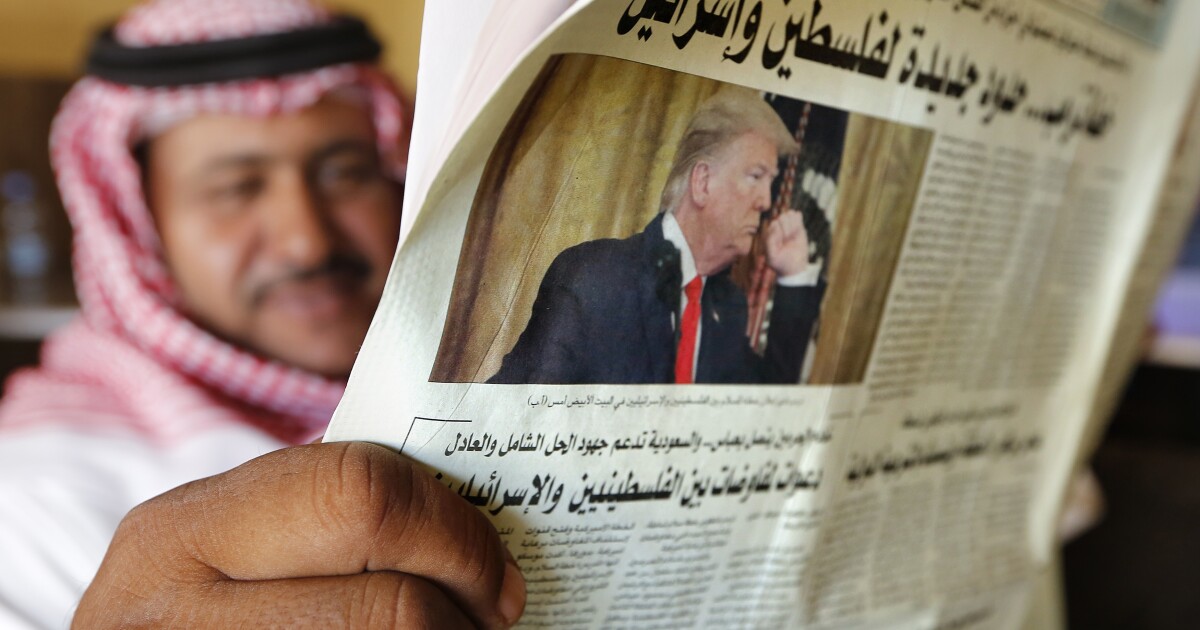 Nearly two dozen world leaders have signaled their openness to President Trump’s sweeping new peace plan for Israel and Palestine, ignoring claims in the U.S. media that it was dead on arrival to focus on it as a beefy starting point.

In response to rockets and explosive balloons launched from #Gaza into #Israel over the last day, our Air Force just struck a number of Hamas terror targets in Gaza. We hold Hamas responsible. They will bear the consequences for actions against Israeli civilians.

We know that the #UAE"s Foreign Minister made a statement about an #Israel'i & UAE alliance taking shape last month. Now we know the #WhiteHouse hosted a meeting between Israeli & UAE officials to form a non-aggression pact between Israel & the UAE.

#Hamas's Military Wing, Al-Qassem Spokesperson is due to make a speech in the coming hours. This is normally part of the course that comes when tensions between #Gaza and #Israel are high.

Bloomberg Op-Ed - Time For Palestinians To Present Their Own Peace Plan https://news.yahoo.com/time-palestinians-present-own-peace-124616668.html?soc_src=hl-viewer&soc_trk=tw… via

Arab News - Khamenei: Iran Will Support Palestinian Armed Groups As Much As It Can

Be about right, timing wise, for a major chemical weapons release in Damascus, given all the stuff going on right now. 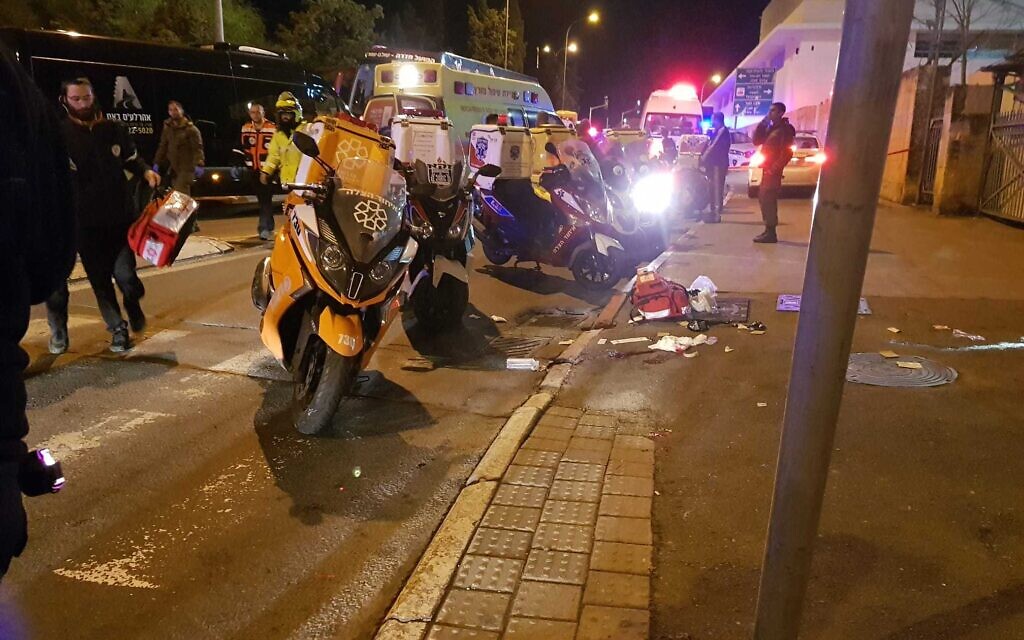 @no_itsmyturn
19 y/o terrorist was killed during clashes in Jenin. Earlier on Wednesday, there was a death in Hebron, so this is the second one.

kind of interesting looking,in an insane kind of way
Aleph

Palestinians reject U.S. allegations of incitement after a day of clashes and attacks left three Palestinians dead and more than a dozen Israelis wounded