TIP FYI : US Savings Bonds Now Paying 7+ pct if anyone wants some

Been meaning to post this - Treasury Direct allows you to buy notes and bonds DIRECT from you bank account - I've used them for years and it works very well.

Saw a tip on Denningers forum and bought some last week - the only catch is that you have a limit of 10k per year you can buy - however if you have kids under 18 you can open up a linked account and buy for them too - then when they turn 18 you must sign the account over to them. And another minor catch is if you sell the bonds before 5 years you lose the last 3 months worth of interest.

7 percent interest is unheard of these days - and its direct from the US Govt.

Can't you also receive Income Tax refund in these?

I’m definitely going to look into this. Thanks for posting!
H

I Bonds, Offering a Safe Space for Cash, Get a Big Rate Bump - The New York Times (nytimes.com)

Inflation Bonds Are Getting a Big Rate Bump
The rise in prices has affected not only consumer goods but some government savings bonds, and it could benefit some investors looking for safe spaces for their money. 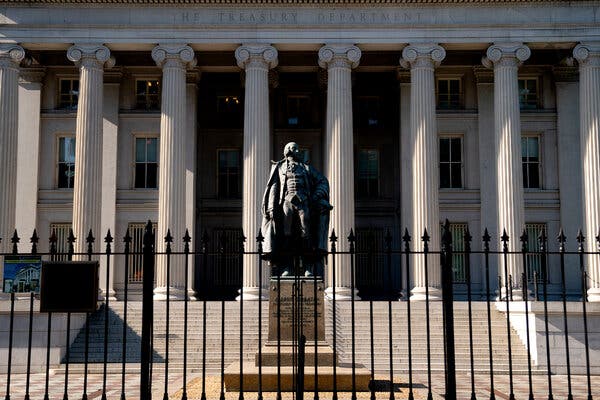 The new inflation-based rate, announced by the Treasury Department, applies to I bonds issued from November through next April, as well as to older I bonds. Credit...Stefani Reynolds for The New York Times
By Ann Carrns

Published Nov. 3, 2021Updated Nov. 5, 2021
As the country recovers from the pandemic, rising prices have become a worry for many Americans. But inflation has also driven up rates on some government savings bonds, creating an opportunity for people seeking a safe haven for their cash.
New series I savings bonds, known as inflation bonds or I bonds, issued in the next six months will earn a rate of 7.12 percent, the Treasury Department announced this week. That represents the second-highest initial rate ever offered on the bonds, the department said. The new inflation-based rate applies to I bonds issued from November of this year through next April, as well as to older I bonds that are still earning interest.

By comparison, the average rate for a one-year, online certificate of deposit is less than 0.5 percent, according to the financial website DepositAccounts.com.


Savings bonds generally are low-risk investments, but I bonds’ rate structure is complicated and there are drawbacks, like limits on how much you can buy and penalties if you cash them in early.

“While Series I bonds may sound really attractive at first glance, investors should carefully consider the complexities coupled with the cap on the purchase amounts before making an investment,” said Kevin Shea, senior portfolio manager at Creative Planning, a wealth management firm in Overland Park, Kan.The rate earned by inflation bonds, which were first issued in 1998, is made up of two parts: a base rate, fixed for the life of the bond; and a rate that varies based on inflation, as measured by the Consumer Price Index, which can reset every six months, in May and November. The Treasury Department applies a formula to combine those two rates into a “composite” rate.For more than a year, the fixed rate on I bonds has been a disheartening zero. Yes, zilch. That means all of the interest earned on those I bonds comes from their variable inflation rate. No one knows for sure if the current bout of brisk inflation will be temporary or persist into next year. But if the bonds’ inflation rate were to fall, while the fixed rate stayed at zero, the rate paid on the bonds could be less attractive.The composite rate for new bonds could even reach zero — although it’s guaranteed to never go below that. So you’ll at least get back your original investment when you redeem the bond, according to Treasury.


You won’t owe state or local income taxes on the interest earned, but you will owe federal income tax — although you can wait until you redeem the bonds to pay it. (If you use the money for higher education, you may be able to avoid part or all of the federal taxes.)

Inflation bonds pay interest for 30 years unless you redeem them earlier. You can redeem digital I bonds online and have the money deposited in your bank account. If you still hold paper bonds, you can redeem them at local banks, according to Treasury Direct.

Savers who bought I bonds years ago, when the fixed-rate component was higher, may be earning double-digit composite rates now. Holders of bonds issued from May to October 2000, for instance, will earn 10.85 percent because the latest variable inflation rate is added to the bonds’ fixed rate of 3.6 percent, said Ken Tumin, founder of DepositAccounts.com.
To see what rate your bond is currently paying, check on TreasuryDirect, the website operated by the Bureau of the Fiscal Service, part of the Treasury Department.

So how do you buy I bonds? There are two ways. The first is to purchase them at TreasuryDirect.gov. To do this, you’ll first need to establish an online account with a minimum deposit of $25 and link it to your bank account. You won’t receive a paper bond; most new savings bonds are electronic and remain in your digital account.

The second way is to buy I bonds at tax time with your federal income tax refund. You can buy up to $5,000 in bonds this way — the only way left to get paper savings bonds.


There are other caveats. You must hold the bond for at least 12 months before redeeming it. So if you are using the bonds for emergency funds, Mr. Tumin said, you should have extra cash set aside elsewhere, in case you need it sooner. “It’s not an ideal emergency fund,” he said.

And keep in mind that if you redeem an I bond before five years, you’ll owe a penalty worth the interest of the previous three months.

The latest bout of inflation may be transient, so I bonds should be considered along with other options for beating inflation longer-term, said Jacob Kuebler, senior financial adviser with Bluestem Financial Advisors in Champaign, Ill. “Over a long period,” he said, “the stock market is a good inflation hedge.”

Correction: Nov. 5, 2021
An earlier version of this article misstated the URL for the website Treasury Direct. It is TreasuryDirect.gov, not TreasuryDirect.com.

‘Twould take some real faith to believe in sufficient remaining solvency for payout....

The very cause for this opportunity is the very reason to just say no.
O

Remember, you get more of what you pay for. I have more than enough government right now.
H

The very cause for this opportunity is the very reason to just say no.
Click to expand...

I wonder what these high rates will do to private banks when a bunch of people drain their savings accounts to buy them.

Why not- they are going to be worthless paper from a bankrupt nation long before 5 years are up.

Buy in now and in a week you can hate yourself when the rate goes to 14.

Why would anyone buy now?

Still well below the real rate of inflation
D

Return OF your money means more than return ON your money.

I see this as being just another dangerous dot.

It's out of place.

Dobbin said:
Buy in now and in a week you can hate yourself when the rate goes to 14.

Why would anyone buy now?

Why would anyone buy, period.

If they would give me 7% interest on 6 ounces of gold that I could withdraw at anytime at no penalty besides losing the interest, with huge reassurances and iron clad contract to get back the exact same gold I give them.....

Don't laugh. It's the way it should be.
D

Interest rates = rent for the use of your money.

Matt said:
Still well below the real rate of inflation
Click to expand...

This true - except if "stagflation" goes to a true depression. THEN 7 percent interest will look a dern sight better than the "haircut" that you get when your bank goes belly up or your creditors declare bankruptcy (same thing really.)

"Hello, this is your bank. We'd like to "buy out" your investment in our bank savings for 50 percent on the dollar: you invested $1 - we'll give you back 50 cents."

This is in essence what bondholders get when a company goes belly up on the stock market - very unusual to be kept "whole" but much better than the poor stockholders who take a bath.

Seven percent sounds great, but who in the world would trust the government with money?
M

When my divorce is final i will get some of his 401k money. I plan on buying $2,000 worth of silver. I'd feel safer than buying digital bonds. I used up every penny of my silver last summer to survive after the ex left me. It paid my car insurance and other bills.

Technically the I bond rate should be high, given the inflation we are seeing. I also think it is a way for the treasury to show some money flowing into the US Gov.

Right now, any investment is risky. If a married couple wants to buy $20K in silver, at least some of that stash would need to be inside a real safe (Note: A real safe being one with an actual plate door at least 1/4” thick. Not the easier to defeat safes sold at places like Dick’s, Bass Pro Shop, etc..). Such a safe starts at $1,500 in my area (24”x60”x20” size). Even a legit safe can be defeated with time, so now one needs a monitored alarm system if they ever want to leave the house.

Same goes for guns, foreign currency, ammo stock pile, etc.. Housing might be the safest bet, but even that comes with risk. If the US Gov truly defaults on their bond payment, my guess is the entire country will have collapsed and who knows what things would be like.

Diversification is the name of the game.

I always liked savings bonds, and I really wish the Gubmint would advertise them more as a savings vehicle like they used to do in the far away past.

I would never recommend putting ALOT of money there, but a few bucks a month is just another bucket to possibly draw from downstream.
Last edited: Nov 26, 2021
D

I'd think for a second if they were offered at 25%.

OK second has passed, no

It seams to me holding cash is the risky investment, loosing value.
D

ivantherussian03 said:
It seams to me holding cash is the risky investment, loosing value.
Click to expand...

You can still get paper I Bonds.…

BUBBAHOTEPT said:
You can still get paper I Bonds.…

Too bad there isn’t really any fixed rate to them anymore…
Click to expand...

PS...F#ck the US government and anything that would support them at this point.

They have declared war on all of us.

Do not support them in ANY way.

If I had any investments in official US financial instruments I'd do the reverse of this bond thing and sell everything.

F#CK ALL OF THEM.

But boy when you could get that permanent fixed rate attached to the ever illusive inflation rate, that was a good and as safe as paper can be…

But in the end, it’s all still paper and a promise…
A

It is just paper and a promise BUT still the best looking ugly girl in the bar when it is all said and done is important fact to remember. I'm interested as diversification.
D

There is speculation for years that interest rates would hit 25%+ and there would be a huge government contraction.
You must log in or register to reply here.
Share:
WhatsApp Email Link
Top