Housecarl said:
Also an earthmover and a lot of lye unless you want to go with a burn pit for dramatic effect.
Click to expand...


Authored by Zachary Stieber via The Epoch Times (emphasis ours),
Dominion Voting Systems and Maricopa County officials are refusing to hand over passwords for election machines to auditors in Arizona. 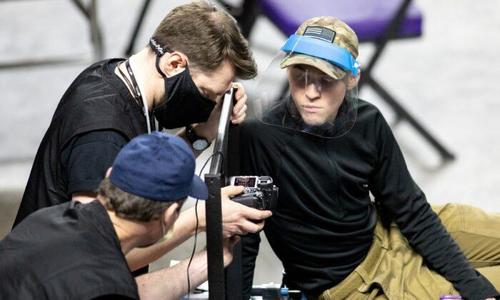 Contractors working for Cyber Ninjas, which was hired by the Arizona Senate, examine and recount ballots from the 2020 general election at Veterans Memorial Coliseum in Phoenix, Ariz., on May 1, 2021. (Courtney Pedroza/Getty Images)
Dominion said in a statement to news outlets on Thursday that it would comply with the audit, but Cyber Ninjas, the firm hired by the Arizona Senate to conduct it along with three other companies, is not accredited by the U.S. Election Assistance Commission.
“Releasing Dominion’s intellectual property to an unaccredited, biased, and plainly unreliable actor such as Cyber Ninjas would be reckless, causing irreparable damage to the commercial interests of the company and the election security interests of the country,” Dominion said. “No company should be compelled to participate in such an irresponsible act.”
Cyber Ninjas did not respond to a request for comment.

Maricopa County officials previously said that they did not have passwords to access administrative functions on Dominion Voting Systems machines that were used to scan ballots during the election, according to the Senate’s audit liaison, former Republican Secretary of State Ken Bennett.
“They’ve told us that they don’t have that second password, or that they’ve given us all the passwords they have,” Bennett told One America News at the site of the audit in Phoenix last week.
The county is also withholding routers from auditors, claiming security concerns.

Both routers or router images and access to election machines were part of the materials the state Senate subpoenaed late last year. A judge in February ruled that the subpoenas were valid and should be obeyed.
Arizona Senate President Karen Fann, a Republican, recently threatened to subpoena county officials if they didn’t stop their noncompliance with the subpoenas, but backed off the threat in a letter on May 12.
Instead, she asked Maricopa County Board of Supervisors Chairman Jack Sellers, also a Republican, to cooperate voluntarily by attending an upcoming meeting at the state Capitol to go over the audit issues.

Fann said auditors have found discrepancies in the ballot count, including one batch that was supposed to be 200 but only numbered 165. She also said the audit teams found an entire database directory from an election machine had been deleted, and that the main database for the election management system software was not located anywhere on the machine, suggesting that the main database for all data related to the 2020 election had been removed.
Sellers on Thursday indicated he would not attend the meeting and disputed the allegations.
Deleting files off the server “would be a crime—and it is not true,” he said.

“After reviewing the letter with County election and IT experts, I can say that the allegations are false and ill-informed. Moreover, the claim that our employees deleted election files and destroyed evidence is outrageous, completely baseless, and beneath the dignity of the Arizona Senate,” he added, calling for an immediate retraction of statements senators and their liaison team made on social media and to the press.
The Board of Supervisors, which held a closed-door emergency meeting on Friday, plans on holding a public meeting on Monday to address the matter.
Fann, an Arizona Senate Republican Caucus spokeswoman, and the liaison team did not immediately respond to requests for comment. 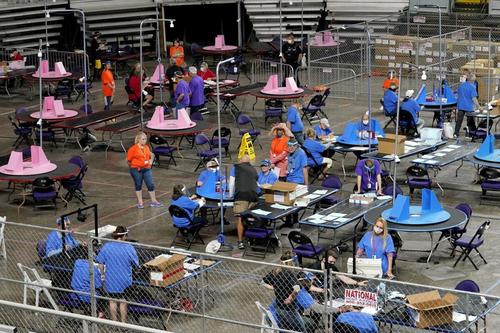 Maricopa County ballots cast in the 2020 general election are examined and recounted by contractors working for Florida-based company, Cyber Ninjas, at Veterans Memorial Coliseum in Phoenix, Ariz., on May 6, 2021. (Matt York/Pool/AP Photo)Auditors Pack Up as Senate Signs Lease to Extend Audit

Auditors, meanwhile, began packing up on Thursday evening because the audit will take a break due to scheduling conflicts.
The audit has been taking place at the Veterans Memorial Coliseum on the state fairgrounds in Phoenix. High school graduations are scheduled to take place at the building beginning May 15.
Hand counting stopped at 7 p.m. on Thursday and workers began collapsing tables and preparing to move ballots to another location.
About 500,000 of the nearly 2.1 million ballots cast in Maricopa County in the 2020 election have been counted in the audit, according to Bennett.

The Arizona Senate signed an extension to their original agreement that allows auditors to store materials in the Wesley Bolin Building, which is also on the state fairgrounds, from May 12 to May 23.
The approximately 19,000-square foot building has a large open floor plan and two large roll-up doors, according to the Arizona State Fair website.
“Due to temperatures during the summer months, this building is not recommended for use between May through September,” the site states.

Bennett told The Epoch Times in a previous interview that the materials will be secure and that the site at which they’ll be stored can be tracked online via 24-hour streaming, just like the audit itself.
“There’s no deadline for the audit,” Bennett said. “The goal is not speed; the goal is accuracy and completeness.”
The audit teams can resume occupancy of the coliseum on May 23 and use it until June 30, according to a copy of the extended agreement obtained by The Epoch Times.

The original scope of work document from Cyber Ninjas said reviewing voter registration and votes case would take approximately 20 days and that work would be conducted remotely. The vote counting phase would take about 20 more days, it said, while the electronic voting system phase would take some 35 days.
But all three of those phases could be carried out simultaneously, according to the firm. An additional week was said to be required after completing everything else to finalize reporting.
The audit started on April 23.
Posted for fair use